SMN report:
The Round 2 model company recently acquired all rights to the leading model kit brands AMT, MPC and Polar Lights from Tomy, the Japanese toy, merchandise and entertainment name.


Buying brands
Round 2 has acquired the brands from Tomy after manufacturing branded model kits under license since 2008. “We’ve had a great relationship with Tomy International for a long time and it has been a pleasure working with them as a licensee and now as a buyer,” said Thomas Lowe, President of Round 2.

Iconic brands
Lowe added: “These are some of the industry’s most iconic brands and our acquisition represents a significant strategic fit with our initiatives and where we believe the industry is headed, in the near and long term.”

History of kit building
AMT, MPC and Polar Lights have histories that go way back. AMT (Aluminum Model Toys) was founded in 1948 as a promotional toy company. MPC (Model Products Corporation) dates from 1963, focussing on creating automotive kits. The youngster of the trio is Polar Lights, founded in 1996. It has found an excellent niche in genre kits, such as figures, horror, and pop culture.

Retro kits
It’s a brilliant buy for Round 2, as some of the tooling and materials date back to the 1950s. And of course, this allows fresh opportunities to recreate classic kits in original-style packaging - which means a retro-look, with hugely desirable nostalgia built in for a new generation of model fans.

A builder from the beginning
Thomas Lowe has an enthusiast’s attitude to the buy: “I grew up building models. Not in my wildest dreams would I have ever imagined I’d someday own the brands I was building as a kid.” The SMN take on all this? Excellento! 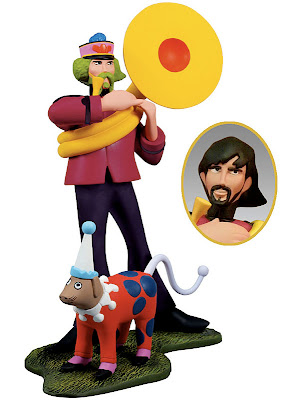 Sergeant Pepper Beatles figures
There are some terrific kits coming up, such as the Polar Lights Sergeant Pepper Beatles figures. Due March 2012, these are pre-painted and offer Beatles fans the chance to have classic kits of the Liverpool rock group, as the members starred in the 1968 animated movie Yellow Submarine. You’ll be able to finish the figures as they appeared - as Sergeant Pepper’s Lonely Hearts Club Band members, or in their cartoon Beatles look. The figures are to 1:8 scale, and will come in handsome collector packaging.

MPC Yellow Submarine kit
The Yellow Submarine itself will be released under the MPC label, and it’s due out very soon, in January 2012. The model is moulded in yellow, but requires normal assembly and paint finishing. There’s also a decal sheet, and it will be docked in an extremely nice hippie-style collector’s tin box. Measuring some 230 mm (9 in) long, the Yellow Submarine will include an extra feature - ‘wind-up action’. Nice! A real bathtub navy item then, complete with a spinning prop that will send the sub surging through the suds, though you’ll have to waterproof the paintwork!

Star Trek adversaries
From AMT comes another March 2012 release, a Star Trek Adversary set (top pic). These are mini-models, with a Klingon Bird of Prey measuring just 83 mm (3.25 in) long, while the slightly larger Ferengi Marauder is 95 mm (3.75 in) long. Oddly enough, and especially for small craft in a duo kit, stands are not included. Still, if you’re a Trek fan, this will be a chance to add another pair of starships to your display fleet.

More Round 2 incoming
Watch out for Mat Irvine’s in-depth look at Round 2’s latest kits and 2012 announcements, online soon.