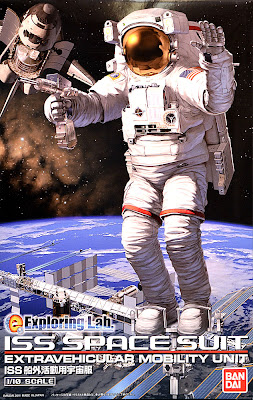 Mat Irvine reports:
Factual space modelmakers are having a rather good time of it at the moment, with reissued Apollo kits from Revell, updated launchers from Airfix, brand new kits from Aoshima and Dragon - and now Bandai have released this fascinating 1:10 scale ISS Spacesuit kit, featuring the Extravehicular Mobility Unit (EMU). 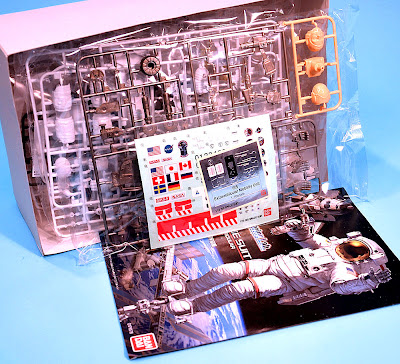 Acronym heaven
Made to 1:10 scale, the Bandai ‘Exploring Lab’ kit provides the EMU suit, occupied by an International Space Station (ISS)  astronaut, plus the end-section of the robotic Canadarm with foot restraint, named in typical NASA acronym fashion, the Articulated Portable Foot Restraint (APFR). Most of the near-200 parts in the kit are moulded in white, with some in silver, some flesh, and some grey. There is also a black runner of vinyl parts that are mostly push-connectors, to allow limb movements. Clear parts make up the base, and helmet glass, and lastly, there’s a single gold-plated helmet sunvisor component. 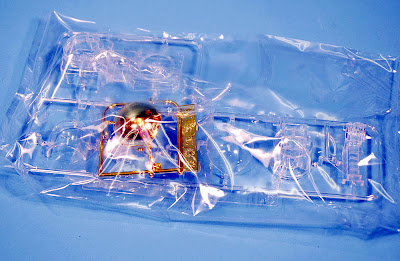 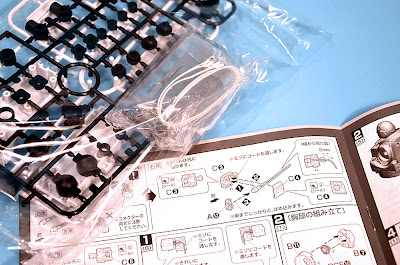 LEDs add a glow
A nice touch is that the EMU lights up, as Bandai supplies two LEDs to fit in the lamp units either side of the astronaut’s head. These need three button batteries for power, and fit in the suit’s backpack. So, snap off the lights off in your display zone for an atmospheric model display. Fitting at the base of the backpack is the Simplified Aid For EVA Rescue (SAFER) unit (another acronym!) which is in effect a cut-down Manned Manoeuvring Unit (MMU) that can be used to steer a safe return if the astronaut loses grip with the foot restraint. Two sheets of decals are provided, though these are the peel-off/stick-on type, not the more conventional waterslide variety. 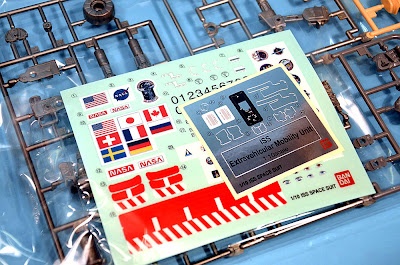 Excellent instructions
The Bandai assembly booklet runs to 20 pages, and although the majority of written instructions are in Japanese, it uses detailed illustrations, so assembly should be straightforward. Colour photographs show the finished model, and the real EMU for extra detailing. The only slight compromise is the fact that the limbs articulate, which leaves somewhat non-scale areas around knees and elbows, but this is a small price to pay, and if you were really worried, the joints could be blended in for a fixed figure position. 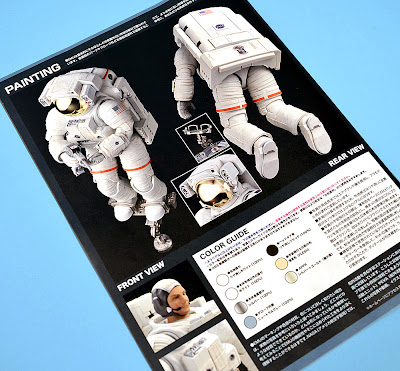 Bandai background - kits or ready-builts?
This is an interesting departure of Bandai, as, although the company has been a major player in model kits since the early days of the Japanese kit industry, in recent years it has cut back on traditional construction kits, bar a multitude of robots. Instead, Bandai has gone into producing ready-made scale models, excellently done, but obviously no good for those of us who actually want to build something. This change has become so ingrained, that when the EMU was first announced, we assumed it was a ready-built model. But it isn’t - it’s a kit and a very detailed kit at that!

Summation
All in all, a very intriguing model that I will build in the hopefully not too distant future. Watch this space for future reports.

Thanks to Hobby Link Japan for the sample kit.

Trip back in time
And how about this for an old-vs-new comparison? It's a detailed drawing made more than half a century ago by Frank Hampson, creator of the classic British comic strip Dan Dare 'Pilot of the Future'. Hampson still stands among the all-time greats for his prescient work. 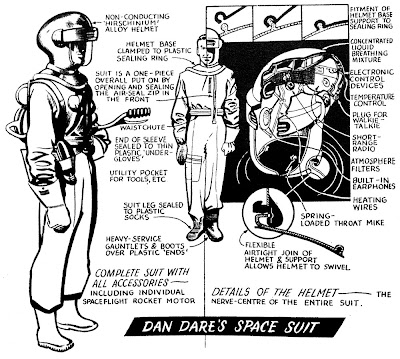