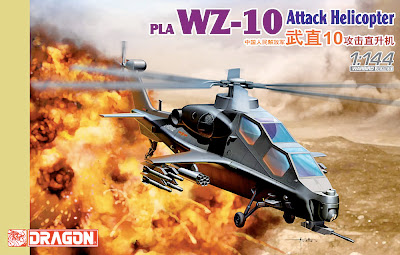 SMN report:
Next up from Dragon is this interesting 1:144 scale ‘Warbird Series’ kit of the PLA WZ-10 attack helicopter, the Chinese answer to Western types like the famed US-built Boeing AH-64 Apache. In layout, the WZ-10 is pretty standard, with a stepped tandem cockpit seating two crew: gunner in front, pilot behind. Flight controls are dualled to act as mutual backup, and the cockpit sides and bottom are protected by composite armour, as are the engines and fuselage fuel tank. 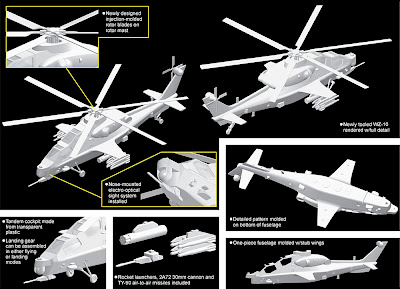 Stealth capability
As for the kit, the general shape looks pretty accurate, not that there have been too many decent pictures released of this Chinese combat machine. The sloping sides reflect at least a token attempt to deflect radar waves, giving the WZ-10 some stealth capability.

Landing gear choice
It’s a new-tool kit, so we can expect the fit and finish to be on a par with Dragon’s other recent kits - in other words, pretty good. According to Dragon, the landing gear can be assembled in ‘landing or flying’ modes. To the best of our knowledge, the WZ-10 does not have retractable wheels, so we’re guessing that this means with oleos extended in flight mode, or compressed in weight-bearing landing position. 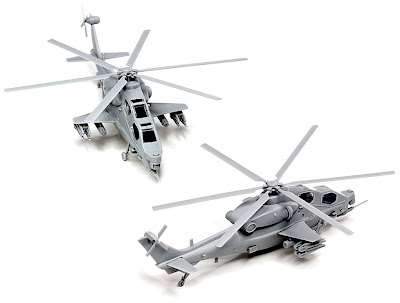 Sensors and more
The real thing has a six-blade main rotor, and Dragon has reproduced this nicely, together with an assortment of nose-mounted sensors and combat ordnance hanging under the stub wings either side. 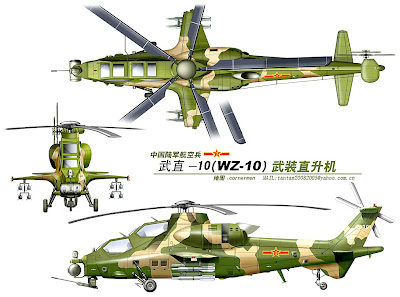 Summation
As you can see from Dragon’s test-shot builds, this is a neat little model, and one that would look good when displayed next to more familiar Western helos, such as the Westland Lynx or Eurocopter Tiger. It’s pretty tiny at 1:144 scale though, and we’d really like Dragon to consider releasing a more detailed version in one or more bigger scales. 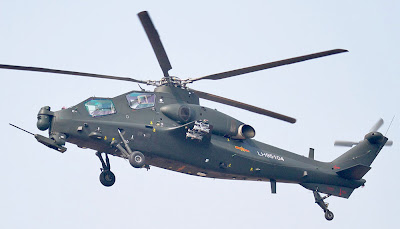