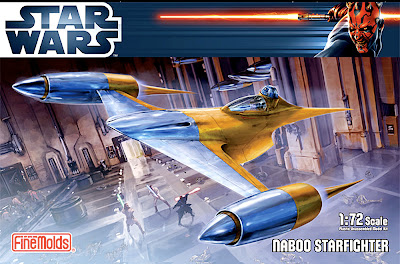 David Jefferis reports:
It’s something of a sci-fi fest at the moment in the scale model world, and here we go again with another Star Wars kit from Japan’s Fine Molds. This time it's the super-sleek twin-engine Naboo N-1 Starfighter.

Starfighter scale
And it gets better, as this combat craft is being produced to model aircraft-standard 1:72 scale. The kit has vaguely recognizable figures included too, in the form of a battle-ready Anakin Skywalker and a seated Naboo Royal Space Fighter Corps pilot. 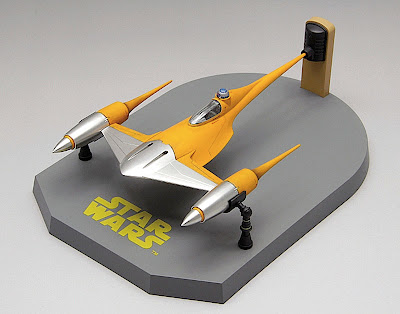 Docking station base
The N-1 Starfighter comes ready to berth safe and snug in a ‘detailed docking station’ display base, which makes a change from the usual flying pedestal design. The N-1's rear spike slots into a vertical post for refuelling. The kit has just 39 components, coming in yellow and grey plastic, plus a clear transparency and decals. We don’t have hands-on measurements for the actual model, though it’s not huge, as the ‘real’ thing was envisaged with a length of just 11 m (36 ft) - and to prove this, the kit’s docking base is just 173 mm (6.8 in) long. 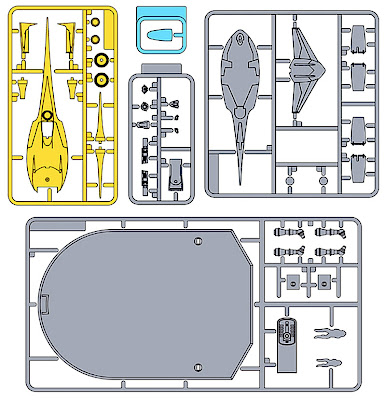 Small but deadly
So, this Fine Molds kit represents something of a tiddler in the galactic combat craft heirarchy. But let’s not be churlish - in the words of Captain Panaka, Head of the Royal Naboo Security Forces: “The N-1 Starfighter represents the pinnacle in Naboo military technology. Armed with twin laser cannons and proton torpedoes, the agile N-1 is designed for patrol and escort missions. Deflector shields protect the pilot while an onboard astromech aids in navigation and repair.” 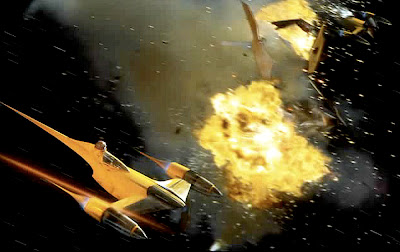 N-1 Starfighter in action (above) and full-size display craft (below) on show at a shopping mall. 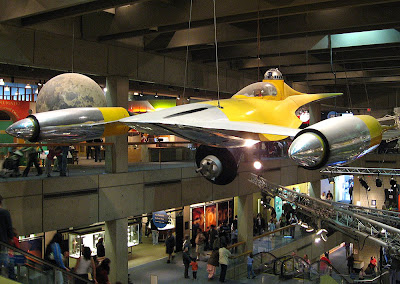 Three-dimensional movie
Just as interesting as the kit is its forthcoming release date, planned for February 2012, to match the premiere of the revised 3D version of Star Wars Episode I: ‘The Phantom Menace’. The original two-dimensional movie was where we first saw the N-1 Starfighter, along with other tasty technical treats, such as the podracers that featured in epic contest across the arid lands of the desert planet Tatooine. 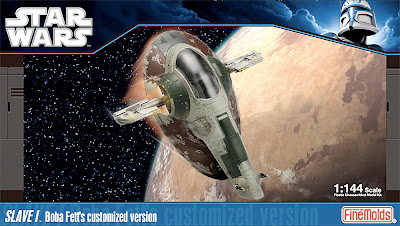 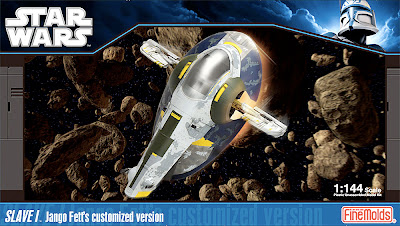 The Fetts, father and son
And Fine Molds have more Star Wars stuff that’s now available, this time to 1:144 scale. Here we have the infamous Slave 1 bounty hunter ship, flown by Jango Fett and his child-clone, Boba. Fine Molds have done a nice job here, producing the two custom variants on the Slave design, which at this smaller scale comes out to an assembled size of 151 mm (5.9 in ) long. There are more parts than the N-1 Starfighter though, if that’s your thing - Fine Molds have broken down the construction into an unfeasibly large 106 components. 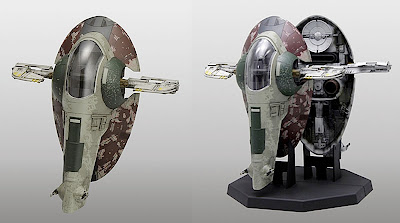 The SMN Slaver
SMN’s comment? Dream on Jango and Boba, as you’ve never seen anything like our custom midnight-black Slaver, specially modded to hunt down and ensnare the insidiously multiplying bureaucrats of the fabled third planets of a G-type star called Sol. Shame the model is presently stored in a packing case, but come SMN’s impending move to more palatial offices, we’ll disinter the beast and show you some pix.

Hobby Link Japan is carrying all three items, and if you pre-order the N-12 Starfighter by January 30, you grab a 20 percent discount. Visit HLJ here.