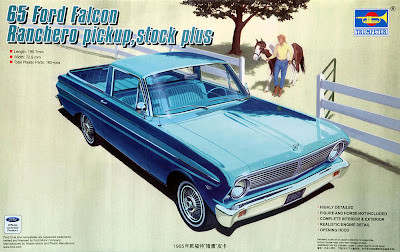 Weekend read from Mat Irvine:
The fact that this major Chinese model manufacturer has taken on established kit-makers at their own game is perhaps not a great surprise. China is responsible for producing a great deal of Western kit output anyway, so it wasn’t long before original kits started to appear.

Many early attempts were not that good, and came from a number of small companies, many of whose names are almost forgotten. But Trumpeter is an exception, and is now regarded as the Chinese equivalent of Airfix, Revell, or Tamiya. The company has refined its products, with quality well up to expected standards.

Soviet and Chinese limos
Initially, Trumpeter concentrated on aircraft, AFVs and ships, though not cars, with the slight exception of a couple of typically Chinese limousines, the Red Flags. To make these 1950s-style monstrosities, themselves adapted from Soviet Zil limos, was perhaps understandable. More of a surprise - especially for US car modellers - was that Trumpeter then started an American car range. Not only were these made to the US-standard model car 1:25 scale (the Red Flags were in 1:24) - but they looked just like traditional AMT, MPC, or Jo-Han kits of the 1960s.

Original release from Trumpeter
Having already made a 1960s Pontiac Bonneville and Chevy Nova, and taken an incursion into the 1970s with a Chevrolet Monte Carlo, Trumpeter is now concentrating on the 1964/5 Ford Falcon. The 1964 Ford Falcon Sprint has been made before by AMT, but it's long out of the catalogues, the tooling having been modified as the 1965 version. Consequently it's highly collectible, and the only way to get one is to pay big bucks, even assuming you can find one. Now Trumpeter is cleverly releasing a Falcon that has never been made before - the 1965 Ford Falcon Ranchero pickup. 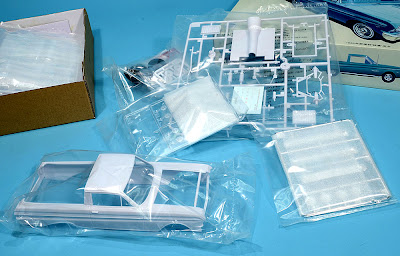 What's in the box?
Trumpeter's package is flatter than the 'boxy' boxes from most US kit companies. Full instructions are included, as is a colour brochure featuring details of various new Trumpeter kits. Kit construction follows the style set by the US manufactures in more recent years, especially when they have made new kits of 60s-era cars. The body remains the classic ‘one-piece’, but interiors have several components, which certainly makes painting much easier. The engines has more detailed parts, as does the chassis, and both are better results than the original one-piece approach. Consequently, if you blank out the Chinese script in the plans - you get English instructions as well - you could be looking at almost any modern AMT, Lindberg or Revell kit of a similar subject. 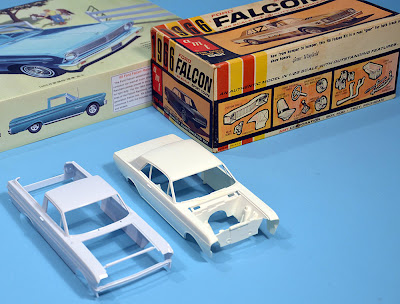 New and old compared
The Trumpeter Ford Falcon Ranchero pickup bodywork (left) compared to a 1966 AMT Falcon Futura Sprint. The engine bay is separately moulded in the Trumpeter, but American companies do that as well these days. 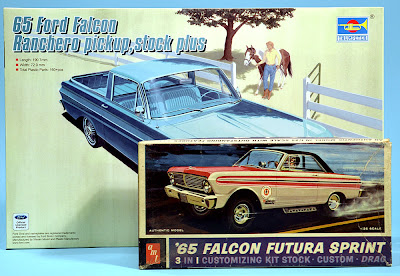 Parts count
This is a kit that I will hopefully get built in the near future, so keep watching SMN for my take on actual construction issues. In the meantime, you get 160-plus parts, mostly in white styrene, but with clear, transparent red for the tail lights, and bright parts finished in chrome. Six vinyl tyres are supplied as hollow, rather than solid mouldings, a Trumpeter feature that's unusual in US kits. 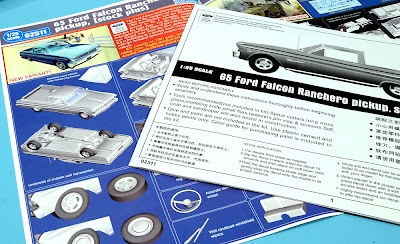 Stock plus
On the box, Trumpeter calls the kit 'stock plus', which means that two versions of the Ranchero can be built - stock or mild custom - the latter limited to engine options, with a choice of stock wheel covers or mag-alloy wheels. The chrome trim on the bodywork does not feature on the kit, so will need to be added, using an aftermarket product such as Bare-Metal Foil. However, nameplates such as the name 'Ranchero’, are included on the decal sheet. When assembled, the Falcon Ranchero is just over 190 mm (7.5 in) long. 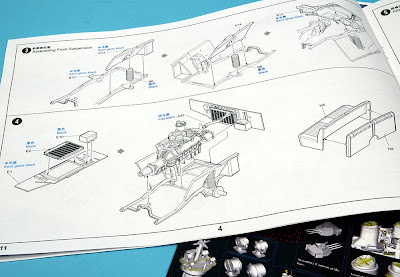 Summation
There are some criticisms of this kit, the biggest of which is the grille. It's not quite accurate, and of course being the grille, is rather noticeable. But I suspect one of the garage companies will come up with an aftermarket replacement, if you are really worried about this. Overall though, the Trumpeter Ford Falcon Ranchero pickup is an excellent attempt, and well worth having if you're into 1960s automobiles.