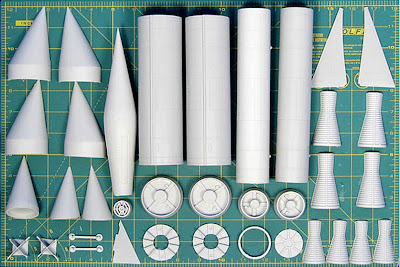 David Jefferis reports:
Great news for ‘what-if’ space fans from Fantastic Plastic, with this month’s release of a reworked and upsized 1:72 scale version of Revell’s 1950s-era XSL-01 Moon Rocket. The original kit, designed by US aerospace engineer Ellwyn E. Angle, was a 1:96 scale production, making the FP edition half as big again. 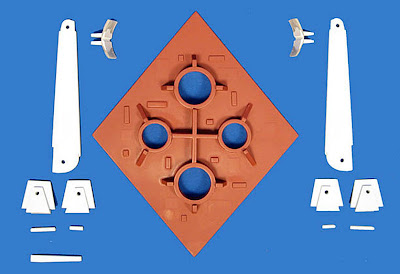 About the kit
The XSL-01 is presented in ‘stack’ formation, with winged Moonship rocket-glider sitting atop the finned multiple booster, though the parts count is surprisingly low, at just 50 components. No matter: the kit - patterned by Scott Lowther, cast by BLAP! Models, with scaled-up decals by JBOT - looks like a fine display piece, especially as it has a specially produced stand (above). Actually, this latter is the biggest departure from the Revell kit, as it is simpler than the original (below). 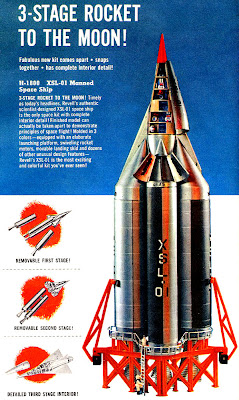 Rare item
According to Fantastic Plastic, the 1950s-era kit (above and below) is a ‘Holy Grail’ collector's item that commands top-dollar prices when one comes up for sale on an auction site such as ebay. So this kit is a chance to get your own, and with the bonus of being made in a far more widely used scale than that of the original. 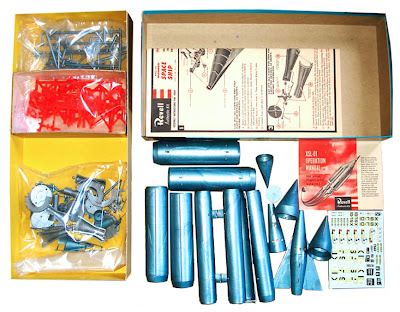 About the original kit
The XSL-01 (Experimental Space Laboratory Number 1) was designed in the mid-1950s by Ellwyn E. Angle. Formerly associated with the Bell X-1 and X-5 aircraft, Angle was working for SLC (Systems Laboratory Corp) in California, when he was put in contact with Revell, based in nearby Venice Beach. Revell needed original concepts for its fast-expanding line of space-related models, then a hot subject area for the company.

Boost to orbit
The launch portion of Angle's XSL-01 concept consisted of four liquid-fuel boosters, to propel the winged and crewed Moonship to orbital altitude. Then the Moonship’s nuclear engine would fire up for the Earth-Moon flight. Angle envisaged a vertical landing on the lunar surface, followed by exploration, then blast-off back to Earth, with a glide landing - like the now-retired Space Shuttle fleet - after atmospheric entry. Revell released a separate kit of the Moonship (above) in 1957, though this has never been re-released by the company.

Summation
This Fantastic Plastic kit has been delayed, but should be available this month. It’s a fascinating kit for space enthusiasts, that now comes in a standard scale. You lose the interior detail that was a feature of the original Moonship which is a shame, but externally the FP kit can be made to look highly convincing.