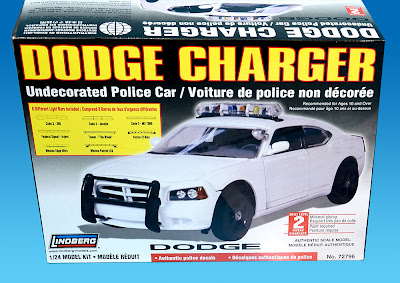 Weekend read from Mat Irvine:
Here’s an intriguing, and relatively quick, conversion for anyone interested - as I am - in both cars and space. Here the car is a 1:24 scale Lindberg Dodge Charger, while the space connection is actually an aircraft, a Lockheed Martin ER-2 flown by NASA on high-altitude flights on Earth resources and other research missions. I’ll come to the Charger kit shortly, but first some background information. 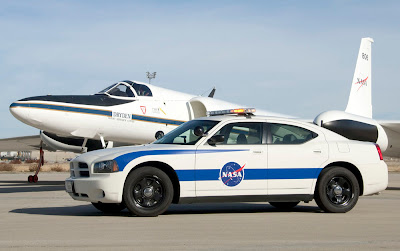 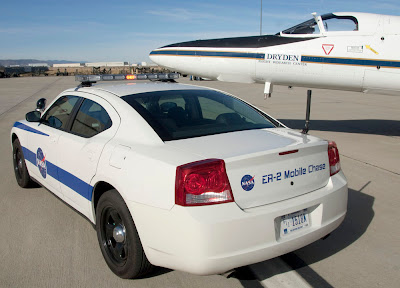 Research missions
Two ER-2 (Earth Resources-2) aircraft are flown by NASA out of Dryden Flight Research Center, and are civil versions of the larger TR-1/U-2S spyplane. Like all aircraft based on the glider-like U-2 design, they are notoriously difficult to fly, a problem extending especially to landings, as the aircraft has a close-coupled bicycle-type landing gear in the fuselage. On takeoff, wheeled ‘pogos’ under the wings help with support, but as these drop away once the ER-2 is airborne, pilots have to make landings landings absolutely dead-level - otherwise a wingtip can drop and scrape the tarmac, with potentially disastrous results. But that’s not the only problem - the aircraft’s big wings make it susceptible to sidewinds, and worse still, it floats over the runway unless the wing is actually stalled, not producing any lift. These flight characteristics combine to make the ER-2 more than a little difficult to land safely. 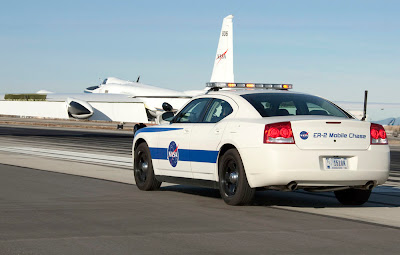 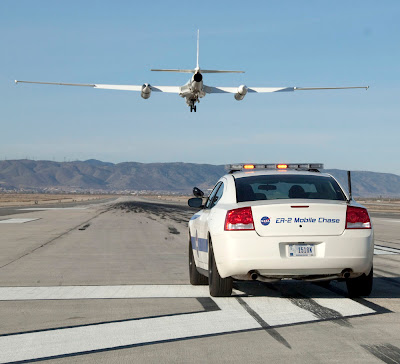 Power on wheels
The US Air Force and NASA have tried various ways to ‘talk down’ pilots as they come in to land, but NASA has came up with one of the neatest to date. It bought a 2010 Dodge Charger in ‘police interceptor’ form, naming it the ‘ER-2 Mobile Chase’. With an experienced pilot driving, he follows the landing aircraft along the runway, giving his airborne colleague a running commentary during the last stages of approach. The Charger’s power makes it ideal for this task, as it can easily do the sort of speeds needed - an ER-2 touches down at more than 190 km/h (120 mph). 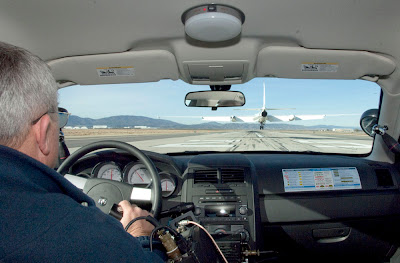 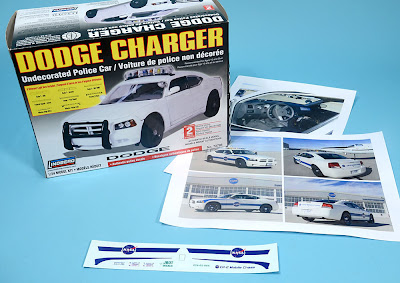 Lindberg Dodge Charger kit
The NASA Charger is unique, but fortunately you can build one without difficulty, as Lindberg has reissued its 2005 Dodge Charger kit in generic (‘undecorated’) police car form. JBOT decals of Canada have produced a suitable set of NASA markings. 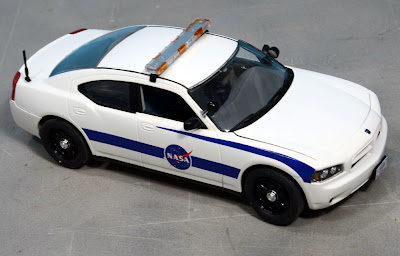 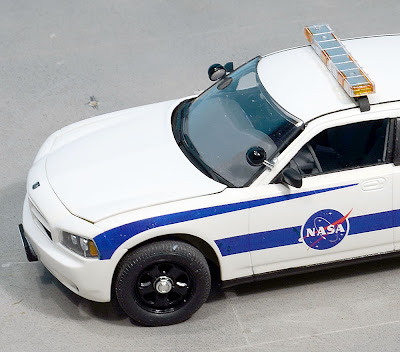 Assembly details
So, with the Lindberg Police Charger, a set of JBOT decals, and a bunch of reference pix, a 1:24 scale NASA-mobile can be a reality. The NASA Charger is fitted with a Whelen Patriot LED light bar, running amber lights. The Lindberg Police Charger comes with a choice of eight different light bars, one of which seems to match NASA’s. The kit also has the correct wheels, and even the A pillar-mounted spotlights. You can build the Charger more or less as per the box instructions, though don’t fit the rear ‘prisoner’ setup, with solid seat and glass partition. The NASA Charger ‘don’t take no prisoners’ and has a standard rear seat. 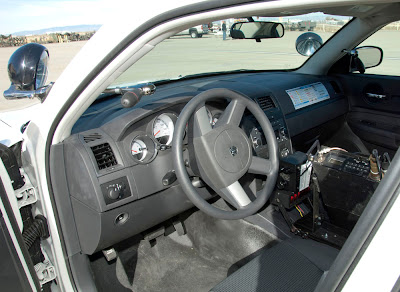 Equipment choice
The NASA car’s centre console equipment - mostly concerned with communications - could either be scratch-built, or you could use the similar items supplied with the police car. 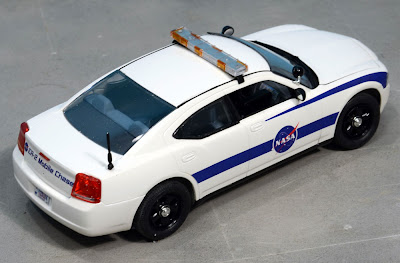 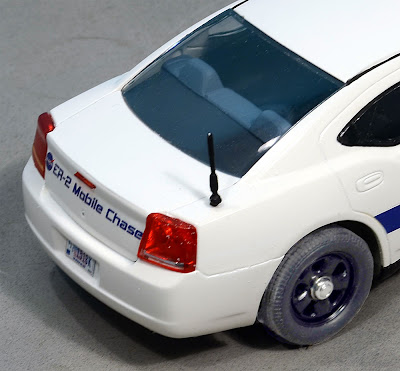 Paint and finish
Then construction is down to spraying the bodywork gloss white, with an interior in various shades of grey, and wheels in satin-black. Then add the JBOT decals. These are printed ‘solid’ onto the backing sheet, which means you have to cut out each one individually, but it’s normal to trim conventional kit decals as close to the subject as feasible. JBOT even includes the correct license plates, though you’ll have to fabricate the bumper support for the front plate.

Antenna and stripes
For a 2010 NASA Charger, the only thing you need to add is a small antenna on the right-hand rear fender, as shown in the photos of my Lindberg model. Note that the main blue side-stripe should actually extend all the way from wheel-arch to wheel-arch. 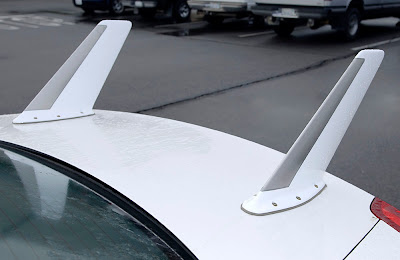 Changes to watch for
Since then, things have changed, so my thanks to Tony Landis, the NASA photographer and space modeller who supplied new pictures, shot on December 13, 2011. The obvious change is to the communications antennas: gone is the one on the rear fender - instead two sweptback fin antennas sit on the trunk lid. So maybe it’s time for me to make version two! 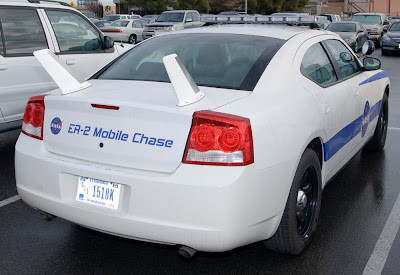 Special thanks to Tony Landis, who went out in the rain to get the new photographs.

More on the NASA Charger, including a short video here.

SMN extra:
The 2012 Detroit Motor Show revealed a tasty new addition to the Dodge lineup, in the form of an updated Charger. This one’s the performance version that comes with a 164-LED rear light display, and very nice it is, too. 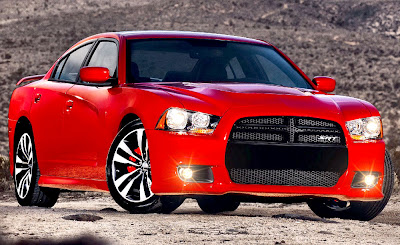 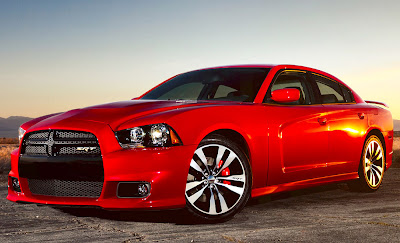 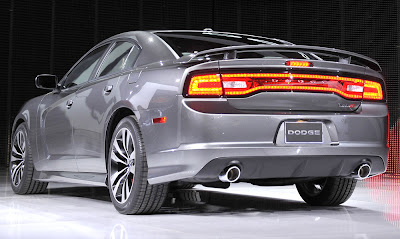