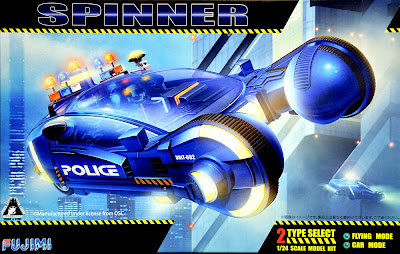 Mat Irvine reports:
Even after all these years, the model companies can still surprise us, especially when one of them - Fujimi of Japan - recently announced a model kit of a ‘star car’ that appeared in Blade Runner, a famous science-fiction movie first released no less than 30 years ago this June. 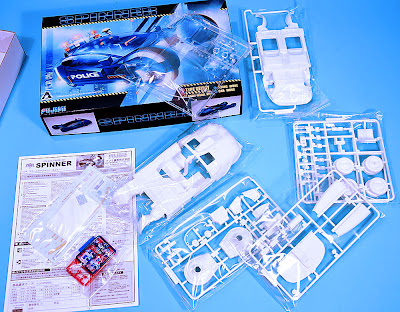 Spinner kit release
I’ll talk about Blade Runner shortly, but first of all, what about the model? Well, now the long wait is over, and kits are freely available, opening the box reveals a fully-detailed injection styrene kit of the Spinner, and it’s made to the accepted star car scale of 1:24. However the kit has managed a surprise in not coming from a US company, instead being released by Fujimi, a Japanese company not known for making star cars before. 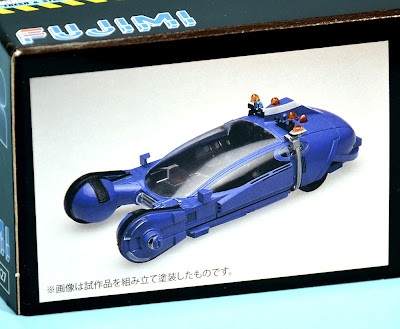 Component count
Opening the box provides some highly favourable initial reactions. The moulding colour is white, not blue as shown in some pre-production images, which means that you’ll need to spray-paint it all. But that’s no bad thing, as plain white opens the door to easy application of different colour schemes. Fujimi has supplied clear, red and blue transparencies, contributing to a total of just under 100 parts - 70 white, the rest transparent. The kit can be finished in either of the two movie modes, road or flight, the latter being noted purely by the position of the front wheel covers. 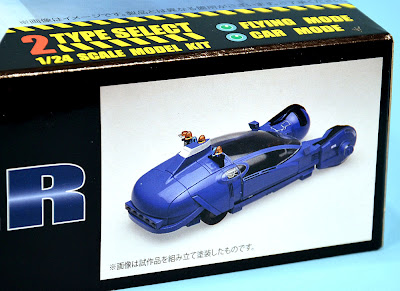 Hazard warning lights
Major mouldings include the floor pan and body shell. The front wheels look pretty accurate, extending as a catamaran-like pair ahead of the main hull. Of particular note are the warning and hazard lights, a small forest of which festoon the roof. These components provide an excellent contribution to the model’s realistic overall appearance. When assembled, the Fujimi Spinner measures 215 mm (8.5 in) long by 90 mm (3.5 in) wide. 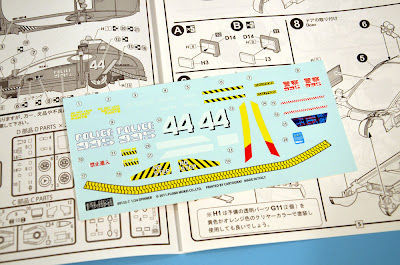 Cartograf decal sheet
Markings made by the specialist Italian decal-maker Cartograf feature various numbers, warnings, and stripes. Fujimi has also added a small photo-etch item with three ‘Spinner’ logos. These look rather like inverted coat hangers and they belong on the doors and rear, though you could also use one as a nameplate on a diorama base, which ought to be easy enough to cobble together for display purposes. 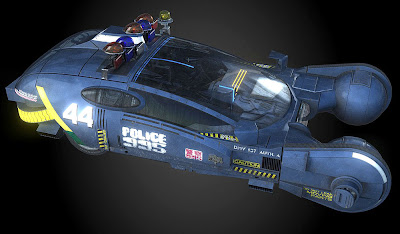 About the movie
When Director Ridley Scott’s Blade Runner hit the cinema screens it gave a distinctive glimpse of a dystopian future, making something of a change from ‘everything will be wonderful’ visions. Mind you, as the movie was based loosely (very loosely, it has it be said) on the 1968 novel Do Androids Dream of Electric Sheep? by the unique US novelist Philip K. Dick, you probably shouldn’t have expected anything else. 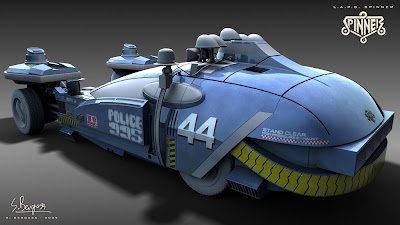 From Syd Mead sketch to Gene Winfield reality
As with many movie projects, Blade Runner went through various versions under several producers, and what ended up on screen bore scant resemblance to the original novel. However the main character, Rick Deckard, survives. He’s an ex-cop drafted back on the job, and naturally enough, has a police car to get around in. But the movie is set in 2019 (1992 in the novel!) and the assumption is that cars can fly as well as roll. Enter ace car customizer Gene Winfield, who took futurist-designer Syd Mead’s drawn concepts, and turned them into real vehicles called Spinners. Some of Winfield’s Spinners could be driven, courtesy of Volkswagen flat-four engines, though flight was possible only through special effects (SFX) cinema magic.

Spinners by the dozen
Winfield made around 25 futuristic vehicles for the movie, including four full-size Spinners - two that could be driven, one that could be flown on wires, and a cutaway version for interior shots. Many of the SFX vehicles were destroyed by Warner Bros, but it seems that three Spinners survive - the two driveable machines and the one in flight-mode. 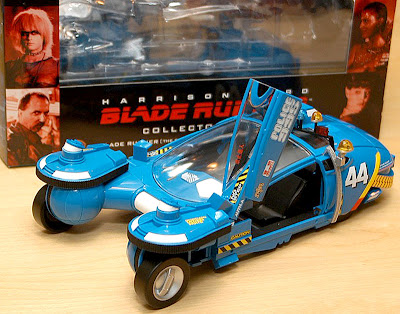 A long wait for the Spinner kit
Spinners may have been just a mode of transport, but soon after the movie was released, they took on a life of their own, and one question was: “When’s the kit due?” Toys and diecasts (above, below) came and went, plus some detailed ready-assembled models and several special-materials kits, including one made out of vinyl, which is fine for figures, but not the most practical material for a solid object such as a car, futuristic or otherwise. But we kit builders who wanted to get down and dirty and actually put something together had to wait... and wait. 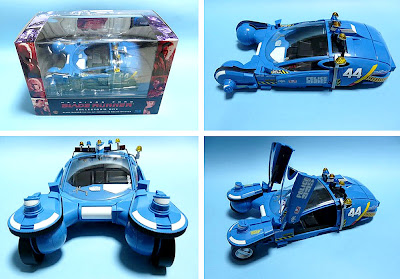 Why did we wait so long?
There’s still the odd reasoning of waiting so long for a kit to be made - maybe it has something to do with Ridley Scott’s sequel, now being planned for likely release in 2013. Of course whether this particular Spinner design will be in it is another matter, as there are other flying vehicles sharing the generic Spinner title. But Syd Mead’s designer visions are not so far off a future reality, and given the movie was set in 2119, we are not that far off that date either!

Thanks to Hobby Link Japan for the sample kit. Visit HLJ here.

Original sketchbook showing production concepts for the movie, a must-visit page-flip site for your delectation, here.

Thinking of the dank and dirty, retro-future flavour of the movie, maybe a kitbash-session to futurize a present-day car would pay dividends in creating something suitable for display next to the Fujimi Spinner. So we present a bunch of other Fujimi 1:24 scale car kits here.