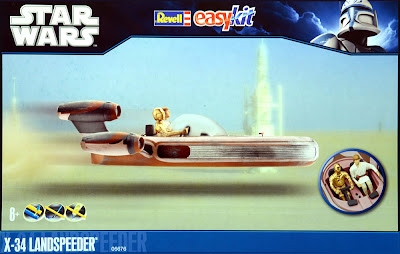 Mat Irvine reports:
Of all the craft featured in the Star Wars saga, one of my personal favourites is Luke Skywalker’s X-34 Landspeeder, first seen in Star Wars Episode IV: ‘A New Hope’. And now - hurrah! - we have a kit to build. 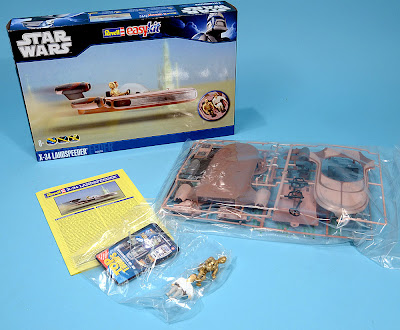 A long wait
Given that that the Landspeeder is first and foremost a car, it would have seemed a logical subject for the kit companies, especially as the first - and for many years, only - Star Wars kits came from MPC, whose speciality was cars. But it didn’t happen - we got X-Wings, TIE fighters, Millennium Falcon and Slave 1 - but no Landspeeder. The nearest a modelmaker got was the Kenner/Palitoy version, which although a ‘toy’, could be made to look reasonable with a bit of work. The company also made a diecast, and there was a resin kit produced in the US, but hardly widely available.

More kits available
However, the expansion of the Star Wars model franchise now includes not only MPC, but also AMT, Fine Molds, and Revell-Germany. In fact, Revell has likely added more than anyone. 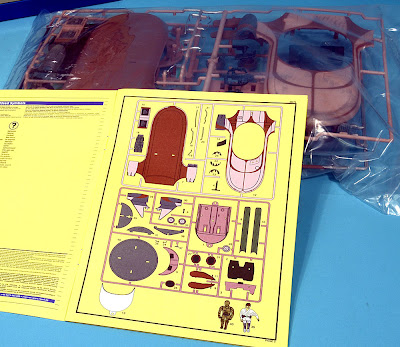 Kit inspection
So, how does the Revell Landspeeder stack up? First off, the caveat is that it’s unfortunately not made to any accepted ‘car’ scale, being in the oddball 1:14 scale. And it is an 'easy kit', a cement-free snap-together model, with pre-coloured components. Even so, it is still a kit! The pre-painting is quite interesting, as the basic shade chosen is pinkish, so the Landspeeder seems to have taken on the appearance of similarly-coloured SAS ‘Pink Panther’ Land Rovers used by the British Army. 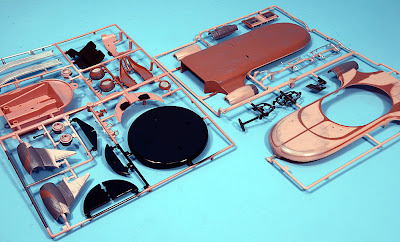 Factory details
Many paint details for the Landspeeder have been pre-applied in the factory by careful spraying. So you get silver side panels, black seats, and metallic engine parts, plus a gloss black stand. In common with other Revell Star Wars easy kits, there’s even pre-applied weathering, though for the purist, it’s quite possible to paint the parts just as you would a conventional kit. However, the Landspeeder can be built ‘as is’ and, maybe with a bit more weathering, made to look perfectly acceptable.

Man and robot
A bonus is that you also get a Landspeeder crew, in the form of pre-painted one-piece vinyl figures of Skywalker and the golden protocol droid C-3PO. The kit has 35 parts, plus four for the stand and the two figures. When assembled, it measures some 243 mm (9.6 in) long. 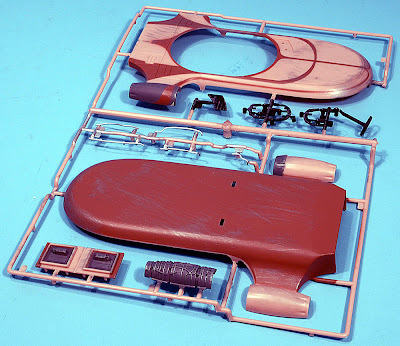 About the Star Wars original
The Landspeeder appears to be Luke’s standard mode of transport on his home planet of Tatooine, skimming across the desert, levitated by some unexplained power source. In reality it didn’t do anything of the sort. It actually ran on three wheels, as it was built on the running chassis Reliant used for all its three-wheeler cars. The wheels were then optically - these days digitally - removed from the final film, so the Landspeeder could be seen to skim effortlessly above ground level. 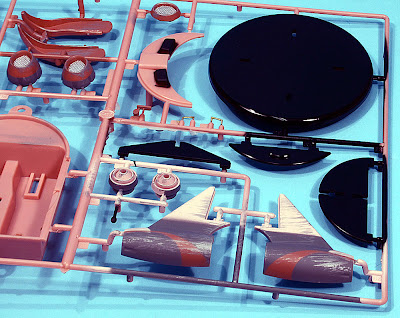 Driver in the right-hand seat please
One odd thing about the Landspeeder is that when pictured in various magazines, especially US ones, you may find it shown with left-hand drive. It didn’t have this, being built on the right-hand drive Reliant chassis. In the Revell kit, this detail is correctly shown as right-hand drive, and with C-3PO behind the wheel. Probably just as well this, as otherwise the droid would be nagging Luke, as it’s a notorious back seat driver… 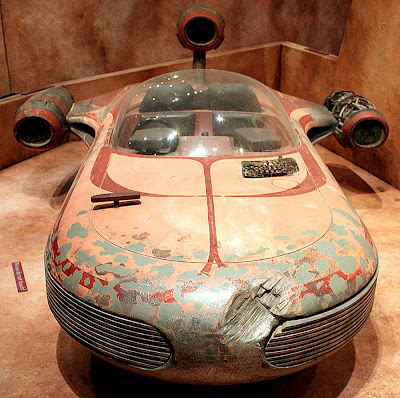 Custom kit
This may be an easy kit, but there is plenty of room for custom options. As the pic above of a full-size movie prop shows, dents and dings all form part of the appeal.
Thanks to Revell-Germany for the review kit