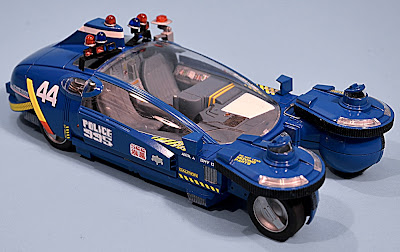 Mat Irvine update:
After my initial report on Fujimi’s surprise release of the 1:24 scale Spinner Police Car from the classic science-fiction movie Blade Runner, here’s how I worked to complete the model. 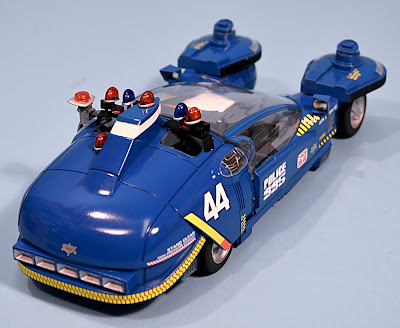 Hard to find details
Frankly, one major problem was finding enough references, to check details when building the model. The obvious starting point might be the movie itself, but a glance at Blade Runner makes you realise that the future-view of Ridley Scott (and of author Philip K. Dick, for that matter) is pretty dank and dismal. Most Spinner shots show a cityscape shrouded in smog and rain, so trying to ascertain details direct from the movie is not worth the bother - frankly, forget it! There is however logical reasoning in that if this is how Spinners appear on-screen, it’s how they should be depicted, but even here one has to start somewhere. 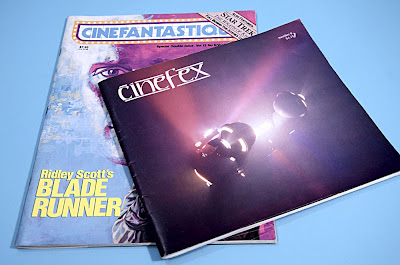 Magazines to the rescue
Given the popularity of Blade Runner, I would have thought that details would be everywhere, from publications of the time and online, but it isn’t so. Fortunately, two revered publications from 1982 - Cinefantastique and Cinefex - did show such details. Cinefantastique’s double-issue, Vol 12, Numbers 5 and 6, and Issue 9 of Cinefex contained features that helped with my build considerably.

Shot in Los Angeles
Even so, there are areas of debate, even down to the main exterior colour. Yes, it’s ‘blue’ but what shade, exactly? The few colour photos that exist of the full-size car, (there were a number of miniatures) tend to show it as a fairly light blue, but the movie shots indicate it was darker, in fact more how you’d expect a police car to look! In fact, the differences in shade are almost certainly down to where the movie was made, not at a UK film studio, where many sci-fi movies of the time were shot, but in Los Angeles, where the sunshine is - most of the time - pretty bright, which was almost certainly the reason for the washed-out blue, when the car was photographed outside. Consequently, I chose Testors Dark Blue enamel, though other model paint companies have similar shades. 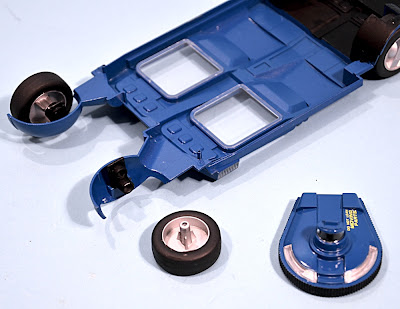 Two sci-fi movies
You can choose between ground or flight modes for this 1:24 scale Fujimi Spinner, though as the differences are purely down to the front wheel and cover positions, it’s possible to let the model be convertible, one to the other. Fujimi does not supply a display stand with the Spinner kit, which is a pity if you want it in flight mode - the Aoshima DeLorean from Back To The Future II (BttFII) rightly comes with one. Incidentally, there is a connection between these two movies - in the Town Square shots of BttFII, you can spot a Spinner and a number of other futuristic movie cars that were used to fill parking slots! 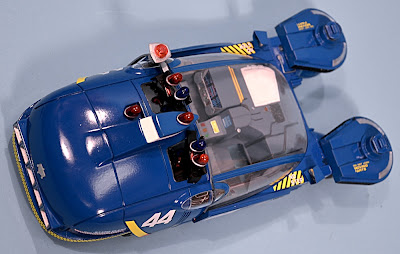 Ground to flight mode
The two items that move when a Spinner translates from ground to flight mode are the front wheels, which fit higher up, and the covers, which swing through 90 degrees. The Spinner’s underside is finished in the same blue. Note the ventral viewports for the police aboard to see the ground below their feet, and the onboard lights for illumination at night. 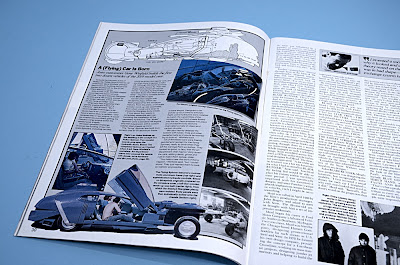 Gene Winfield’s Spinner
Cinefantastique page featuring an actual 1:1 scale Spinner, built by car customizer Gene Winfield. Note the photo at the bottom shows the washed-out light blue, and how clean the vehicle is - the exterior detailing, decals, and dirt, had yet to be added! 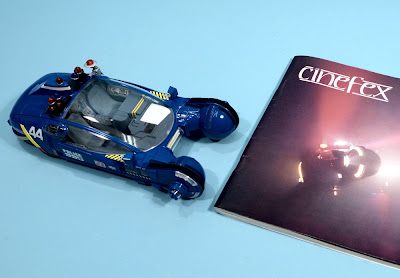 Mr J note:
The website Starship Modeler has a detailed look at this Fujimi kit, together with some brickbats and bouquets, so you might wish to go over and have a look. Mind you, good or bad, this is the only injection-moulded plastic kit to this scale...

Thanks to Hobby Link Japan who supplied the review kit.