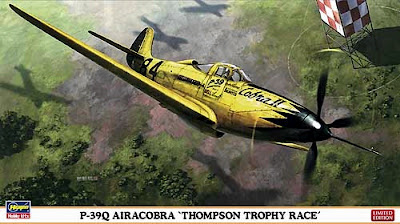 SMN report:
Due from Hasegawa later this month is the bright yellow-and-black Bell P-39Q Airacobra that was flown to victory by Alvin ‘Tex’ Johnston, in the 1946 Thompson Air Race. The kit is a 1:48 scale model of Johnston’s max-power modified machine, and it makes a real change to see a military aircraft model produced in colourful civilian markings.

About the kit
The Hasegawa P-39Q is a 79-component kit, to 1:48 scale, giving it a wingspan of some 216 mm (8.5 in) when assembled. There aren’t too many changes from the standard military machine, though the real thing was lightened dramatically, and had an oil cooler fitted under the belly to cope with the high-power nature of the race, and this is featured accurately in the Hasegawa kit. Naturally enough, there are no guns fitted to this speed racer. The kit includes the bigger four bladed propeller used, and the decal sheet for the race-winning Cobra II looks accurate enough. The nose flash might be easier to paint by hand, rather than expect the decals to be wrinkle-free. There’ll be some touching up to do, regardless.

Ace box art
The box art is worth a mention, as it shows Cobra II (and the shadows of three competitors) pulling a high-G left-hand turn around one of the towers that marked the course. It’s attractive and would look good framed on the wall, or mounted behind the finished model on display, if you’re as big a fan of aviation art as the SMN crew. 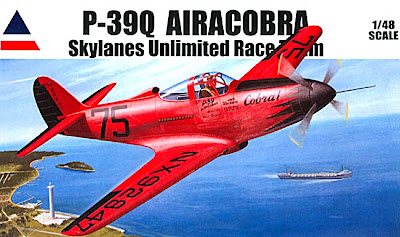 Earlier Accurate Miniatures version
This was based on the 1:48 scale Eduard kit, and there are plenty of details on this at the website 'Internet Modeler', site address listed below. The entire Eduard kit was included in the AM box (above), though the distinctive four-bladed propeller was not supplied. Actually, the kit markings show the red-and-black Cobra I which was the other P-39 prepared for the 1946 race. Sadly, this machine crashed in a lake before the race, killing the pilot, Jack Woolams. 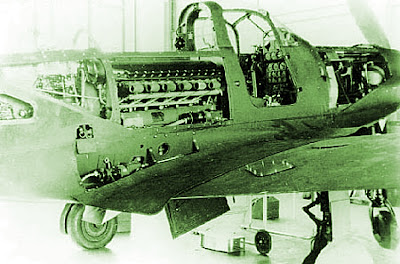 Pilots and planes
The P-39 was ideal as the basis for an air racer - it had a mid-mounted engine (archive pic above), which gave it it good manoeuvrability, and this, plus excellent low-altitude performance made the Airacobra ideal for round-the-towers air racing. Three test pilots for Bell Aircraft were involved in the race attempt. They bought two ex-military aircraft for a nominal $1 each (yes, one dollar - those were the days!) though there was a lot of work to do before the planes were fit to race. The trio drew lots to see who would fly the aircraft, with Jack Woolams taking Cobra I, Tex Johnston Cobra II, while Slick Goodlin was left as reserve pilot. 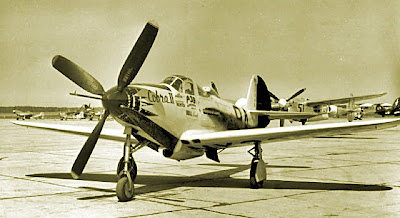 Mods aplenty
Changes to the planes included taking out the military equipment, then adding the new belly oil cooler, extra fuel and oil tanks, a more poweful engine and a big paddle-blade prop. The supercharger engine intake behind the canopy was enlarged and extended for better aerodynamics. 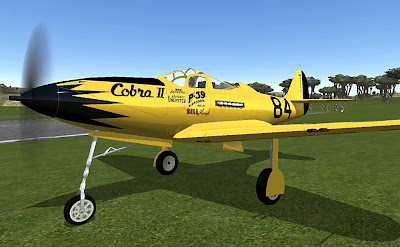 Race-winning performance
According to our sources, Tex Johnston flew Cobra II at 658.4 km/ (409.091 mph) in the qualifier, then won the race at an average speed of 601.7 km/h (373.908 mph). He was in front all the way, and in fact closed the throttle a little towards the end, to save the engine when he realised he was going to win easily.

The Thompson Trophy
The race was a restart of one of the National Air Races that ran from 1929, through the 1930s, but stopping with the onset of World War II. The race course was a left-hand circuit 16 km (10 miles) long, with turns marked by 15 m (50 ft) pylons. The race was a closed course, so made a terrific spectacle for grandstand crowds. The 1946 event was the first race after the end of the war. The Thompson Trophy itself (above) now sits on display in the National Air and Space Museum, Washington, DC.

Summation
We’re waiting for this Hasegawa P-39Q with our tongues hanging out - other Thompson Trophy racers, such as the tiny Gee Bee machines, have already been modelled - and this will add a splash of colour to the collection. Nice choice, Hasegawa!

Hasegawa kits by the score here.

Visit Internet Modeler here to see a detailed review of the Accurate Miniatures Cobra I, also to 1:48 scale.

Nice diecast Cobra I available at a discount (below) from Fantastic Flyers here. 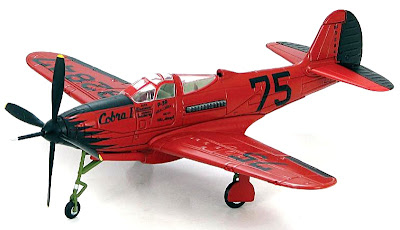