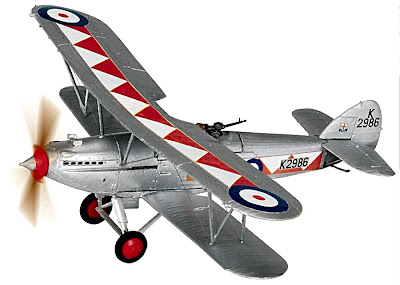 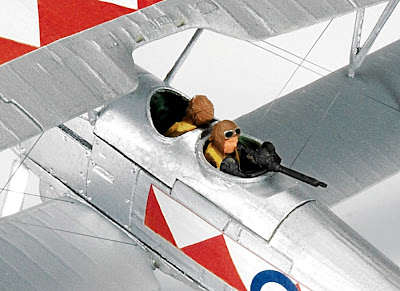 What’s the Corgi Hart like?
The Hawker Hart light day bomber was designed by Sir Sydney Camm, who later designed the Hurricane and Hunter jet. Camm’s design is captured nicely in this Corgi Hawker Hart, from the pointed propeller spinner to the tail skid. Details extend to the strut-mounted pitot tube for indicating airspeed. The long fuselage groove you can see under the engine exhausts is not a cooling intake, but the exit slot for bullets from the single Vickers machine gun, fired by the pilot. The observer had a Lewis gun, mounted on a Scarf ring. You won’t see it on this model, reasonably enough, but for bombing purposes, the observer had to burrow under the pilot’s seat to lie flat in bombardier mode, to aim the 240 kg (520 lb) of bombs the Hart could tote under its lower wings.

Goggles and markings
As usual with diecast models, the crew are perhaps its weakest feature, although the Corgi team has been trying hard - paintwork to these two even includes the metal frames to their flying goggles. The cockpit surround looks rather clunky in the pictures here - in the real model, it manages to look much neater. Markings on this Hawker Hart are for a 1935 machine, K2986 of No 600 Squadron, Royal Auxiliary Air Force. They look good to our eyes, the red-and-white triangles lending a splash of jaunty brightness to this classic silver machine. To 1:72 scale, the Corgi Hawker Hart has a wingspan of 155 mm (6.1 in). 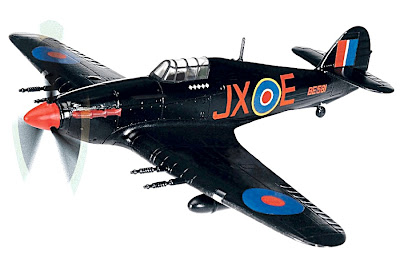 Night Reaper
The other Corgi Sydney Camm design is a Hawker Hurricane Mk IIc, painted in an all-black night fighter finish. This particular aircraft was flown by a Czech pilot, Karel 'Kut' Kuttelwascher who flew with RAF No 1 Squadron. Kuttelwascher was the highest-scoring pilot in 1942 night-ops, at one point scoring 15 kills in 15 missions, while flying his Hurricane named Night Reaper.

Hurricane features captured
The Corgi Hurricane has features common to all of these fighters, such as the slightly hump-backed upper fuselage contours, and fabric covered rear fuselage. This latter is well captured by Corgi, particularly for a diecast model. The wing leading edges feature landing lights needed for night operations, while the characteristic underbelly intake is also included. Wing tanks were carried under the wings, allowing pilots extra time in the air while hunting German bombers on attack missions. All in all, a decent readybuilt model from Corgi, albeit not exactly colourful! To 1:72 scale, the Corgi Hawker Hurricane IIc has a wingspan of 167 mm (6.6 in). 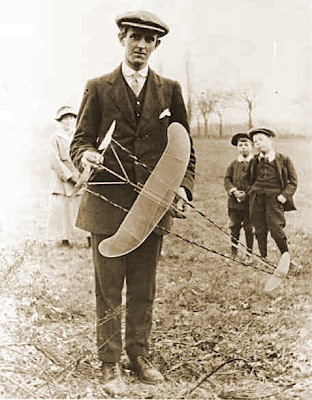 Sydney Camm in his early 20s, when he was a member of the Windsor Model Aeroplane Club. Note his twin pusher-prop aircraft, almost a ringer for today's Piaggio Avanti!

Summation
A nice pair of models here, which gave us a thought - what about Corgi (or Airfix) producing a grand megabox, full to the brim with every major Sydney Camm design flown? Camm's designs already feature in model form,  such as the Hart and Hurricane, with others that include the Hawker Fury, Typhoon, Hunter, and Harrier. But more remain untouched by a mainstream model manufacturer, including his first design, the Hawker Cygnet. Such a boxful would make a tremendous salute to one of aviation’s great designers.