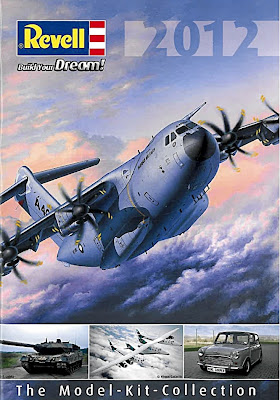 SMN comment:
A glance through the 2012 Revell catalogue reveals a feast of model treats, from standard items to new stuff. And it all looks very tasty indeed. The first new offering that takes our interest is on the front cover, a 1:144 scale model of the Virgin Galactic space travel contender, Space Ship Two and its carrier jet White Knight Two. The pair will form an imposing centrepiece to a space collection, as WK2’s wingspan is 296 mm (11.7 in), a good size for this small scale. 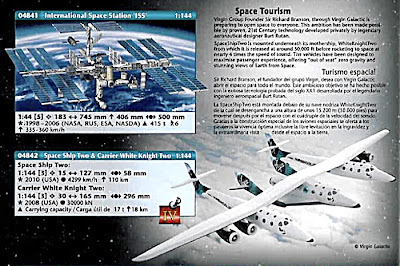 Airborne Owl
A newly confirmed item is the upcoming 1:32 scale Heinkel He 219 Uhu (Eagle Owl). This exotic looking late-World War II night fighter hasn’t been a subject of too many kits in the past, so to see it arriving in this large scale is all the more welcome. According to Revell’s published spec, the twin-engine He 219 Uhu - the first service aircraft in any air force to have ejection seats fitted - will have a wingspan of 578 mm (22.8 in) and length of 486 mm (19.1 in). Parts counters (like us) will note there’ll be plenty of assembly work, as the box will be packed with some 250 components. And the finished result will be nice and large, allowing it to join forces with a whole bunch of big-scale Luftwaffe aircraft from Revell. 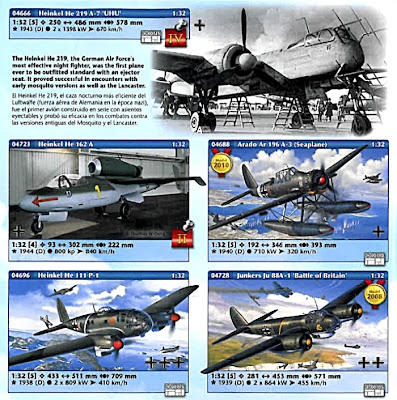 Piggyback plane
Revell reveals an intriguing item in mid-size 1:48 scale, with another Mistel (Mistletoe) design, one that teamed a Focke Wulf Fw 190 flying piggyback atop a Ta 154, converted to form a flying megabomb. The Mistel was an interesting idea that was near-useless as a serious weapon, and only a couple of hundred were made. This particular Mistel variation will look good in model form, even if it was a concept that remained a paper project, until the whole idea was overtaken by Allied victory in Europe. 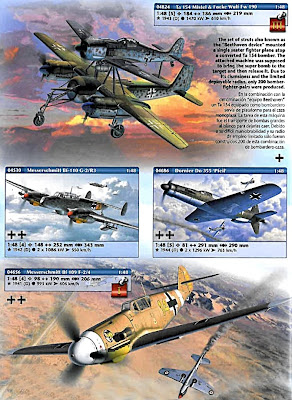 Absent tail markings
But there’s another kit, a Messerschmitt Bf 109, that reflects a political and social change that has happened in relatively recent years, as it shows an Allied aircraft, in this case a Royal Air Force P-40, being shot down over the North African desert. This was an unusual depiction, even unacceptable to many, just a few years ago. And even now, World War II Luftwaffe aircraft are depicted without their tail marking, the Nazi swastika. In Germany and Austria, it remains illegal to show the symbol, a ban that includes kits - hence for strict accuracy, you’ll have to go to third-party decal suppliers.

Nazis from the Moon
A movie that shows something of the rehabilitation of German attitudes toward the past as just been premiered at the Berlin International Film Festival. Iron Sky (trailer above) features a Nazi attack using Luftwaffe 1946-style secret anti-gravity weapons, launched from a secret base on - guess where? - the far side of the Moon! Iron Sky looks to be an entertaining piece of lampooning sci-fi comedy that was partly funded by internet micro-subscriptions, and directed by Finnish indy director, Timo Vuorensola. It seems worth a view, not least for the ace hardware.