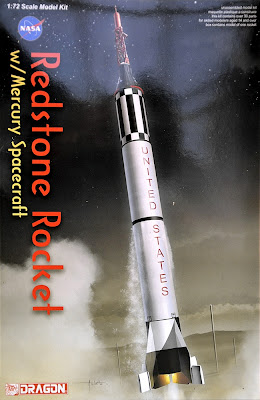 Mat Irvine looks at an important new space kit:
The Hong Kong-based company Dragon continues to surprise, and mostly delight, space modellers with the continuing release of brand-new kits of classic spacecraft. Having dealt with Project Apollo, the company is producing a 1:72 scale kit of the Mercury space capsule that blazed the US trail into human spaceflight, complete with its first launcher, the Redstone rocket.

First a ready-built, now a kit
Dragon has already released this model as a ready-built, and the company seems now to be adapting this and others into actual construction kits. Frankly though, using Dragon’s catalogue system to try and find out what's been done, and if it’s a ready-built or a kit, is somewhat tortuous… 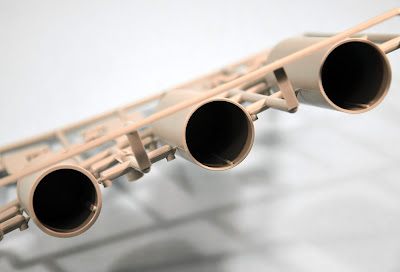 Cylindrical components
The Dragon Mercury-Redstone kit has been neatly moulded in just nine parts, the various rocket sections not being broken into traditional halves, but produced as complete cylinders. This eliminates the inevitable problem of, however well-moulded the components, trying to join together two longitudinal halves, then concealing the joint. The Redstone rocket is on one runner, while the 29-part Mercury spacecraft is on a separate one, almost certainly because a Mercury-Atlas - already done as a ready-built of John Glenn’s Friendship 7 - will follow. 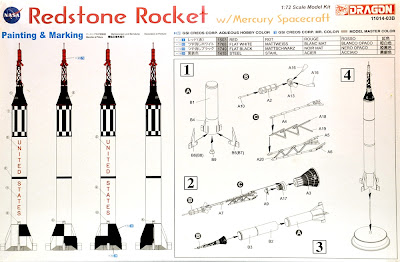 Bottom of the box
The box is big and shiny, though perhaps oddly, the assembly and paint instructions (above) are on the base of the box, rather than on a separate sheet inside. 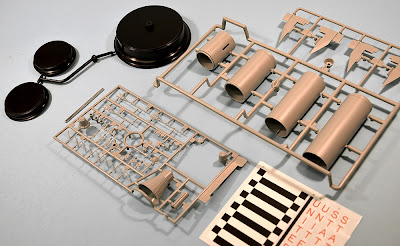 Extra bases
A third runner gives you three black bases (above) though only the larger one is used for this kit, the other two are left over from other models. But they could be useful for the spares box, as in one of modelmaking’s Golden Rules: ‘Never throw anything away…’ 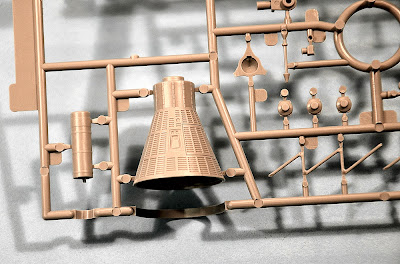 Window shape issue
The only slight problem is that although decals are supplied for both manned Mercury-Redstone flights - Shepard’s Freedom 7 and Grissom’s Liberty Bell 7 - strictly speaking, only the latter can be built. This is because Shepard’s Mercury spacecraft differed from the other five in having a circular porthole, not a rectangular window. Dragon’s moulding (above) represents the latter, so to be correct, only Mission MR4 can be represented.

About the real thing
The one-man Mercury capsule sat atop a Redstone launcher, itself adapted from a missile, as were all launchers before Apollo. Two astronauts flew this Mercury-Redstone combo: Alan Shepard aboard mission MR3 on May 5, 1961, followed two months later on July 21, by Gus Grissom on MR4. These were the first US spaceflights, completed soon after the USSR’s first Vostok launch on April 12 the same year. However, and unlike Vostok, these Mercury-Redstone flights were not orbital missions; instead, they were suborbital shots in which the Mercury capsule completed a graceful ballistic arc that peaked at orbital height. The first US orbital flight had to wait until February 20, 1962, when John Glenn flew in Friendship 7, blasted into space by the more powerful Atlas rocket. 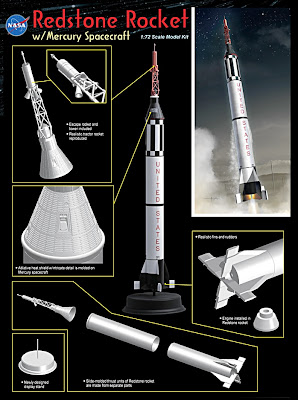 Summation
Despite the problem with window shape, this is an essential kit for all space modelmakers. My thanks to Dragon’s UK importer and distributor, the Hobby Company, for the review kit. Watch this space for my build comments, as this is a kit that is likely to be built in the near future!

The Mercury-Redstone kit is coming soon, meantime the ready-built version is available here.

All sorts of stuff distributed by The Hobby Company here.