SMN preview:
The ‘Wings & Wheels Model Spectacular’ (W&W) will be held this year over the weekend of June 23-24. The radio control (RC) show’s organizers describe it as: “A Modellers’ Paradise." And that’s fair enough, as W&W is reckoned to be the biggest UK event of its kind, and what’s more it’s now 26 years since the first show made its debut at North Weald airfield in Essex, north of London.

Boats, cars, trucks and... Daleks!
Over the last quarter-century, the W&W show has developed into a spectacular event, featuring some of the biggest RC aircraft in the skies over Essex. Wings & Wheels also showcases model boats, cars, trucks, and tanks - plus there’s a mega bring-and-buy sale and more than 70 trading stands selling hobby gear. There’s even a horde of Doctor Who Daleks on parade from a sci-fi build-group.

Dawn Patrol flying team
This is a World War I flying group that flies dozens of 1:3 scale model aircraft from the Great War era. Dawn Patrol is only a few years old, with a first public display at Wings & Wheels in 2008. There were a dozen or so models in the team then, but at the last count that number has just about tripled, so we can expect some pretty amazing displays, hopefully including some of the melee-style mass air combats of the later war years.

Legendary Len
Another visitor to the display team roster will be modelmaker Len Mount, who’s been leading-edge in RC model helicopter flying for nearly four decades. With more than 20 helo championship titles under his belt, Len's experience of all things rotary is second to none, and he was in high demand for technical challenges such as mounting model helicopter sequences in the 1995 James Bond movie GoldenEye, and again with the 1999 box office hit The World is Not Enough.

Sponsored by Red Bull
A trademark Len Mount feature is attention to working detail - doors, hatches, lights and other moving features - all are are faithfully reproduced in his models. That detail impresses more than us modelmakers, as energy drink maker Red Bull is currently backing Len. Naturally enough, the MBB Bo 105 model helo is finished in the familiar red-and-blue Red Bull colour scheme. Mind you, Len’s Lego-style Sea King has the  bright yellow markings of the real thing, as seen in Royal Air Force markings.

Diary date
If you’re in reach of the Wings & Wheels North Wield airfield, then keep the diary open, as the 2012 show promises to be better than ever. Excellent stuff, and we’ll bring you updates nearer the time.

RC tanks here, though feel free to ignore Thomas the Tank Engine, who managed to sneak into the page!

There's more:
Here's some of the action promised by the show - trucks and diggers, tank-buster in action, and a vast array of visitors' cars, parked at the end of North Wield's main runway! 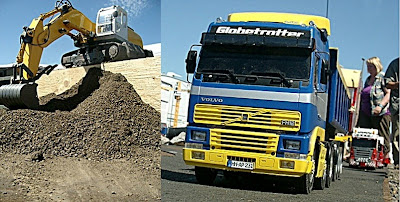