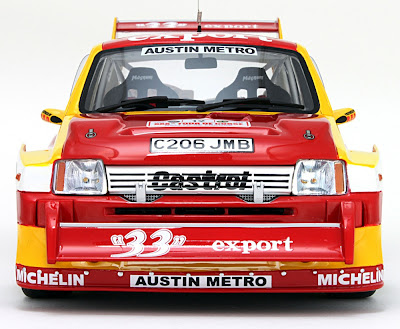 SMN report:
Due soon from OttOmobile of France is a 1:18 scale model of a “complete animal” of a mid-engined British race car, the MG Metro 6R4 from the 1980s. 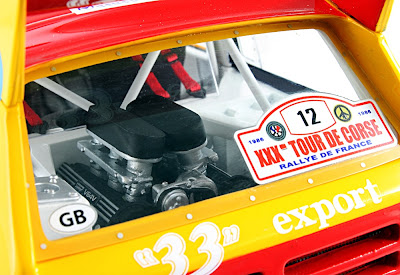 What’s in the OttOmobile model?
OttO has modelled the all-racer nature of the 6R4 very well indeed. Race markings are the most obvious external giveaway and these all seem to be present and correct. Inside, the most obvious difference between the MG road car and the racer was that the engine was taken from between the front wheels to a midships position, behind the crew - and grew to a massive race-winning 3-litre V-6 lump. And OttO has produced a very good looking engine, so that’s all right then. 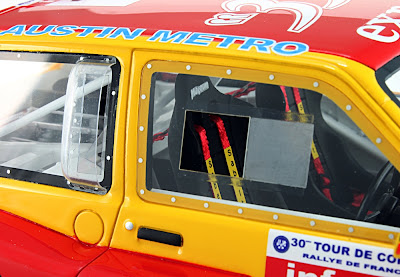 Metro 6R4 on the track
For a taste of 6R4 driving, have a look at this test drive video from the specialist Autocar motoring magazine. It’s a shortish clip, but includes lots of speed and power, background and tech-talk. Yum! Bright and bold, the OttO 6R4 will look terrific on the display shelf, so if you like the car, pre-orders are open for the limited 2000-item run now.

Other May models from OttO
Along with the Metro 6R4, OttOmobile are releasing a pair of eurocars - the unusual Renault Avantime, and a Volkswagen Golf MkII. The Avantime was a designer exercise in weirdness, a semi-luxury four-seater the size of a largish MPV. Rubbish to drive, mind: I tried one to see what it was like, and felt a bit like a sea captain in charge of a land yacht. 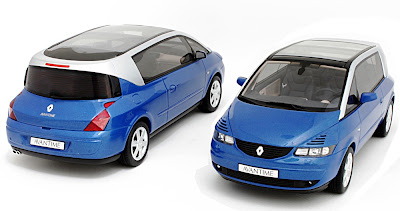 The Avantime was big, unwieldy, and rolled like a pig in corners if you tried taking them at anything more than a leisurely afternoon stroll. However, let’s not be too down on the Avantime - it may have been odd and eccentric, but at least Renault tried something different!

Limited edition
As for the model, it’s up to OttO’s usual standard, though we reckon that something like this needs a few working parts to add interest. We’d love to see opening doors, windows, and more to give the Avantime a lift. However, for Avantime connoisseurs out there, it’s a must-have model. And for this limited audience, OttO’s production run of just 1250 models is probably about right. 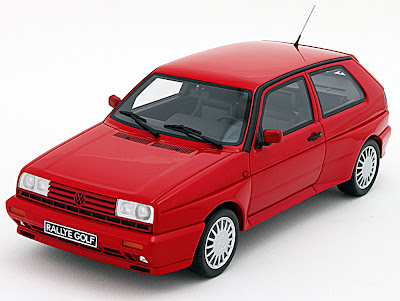 Volkswagen Mk II Rallye
We’d say similar things of the Volkswagen Golf Mk II Rallye - this writer owned a sprightly Mk I GTi for a while, and the Mk II that replaced it was like dreary November, after the Springtime get-up-and-go of the original. Still, OttO has produced a decent enough model of the Mk II, so if you’re into this breed of VW, get on down to OttOmobile and bag yourself one. The Golf Rallye is limited to 2000 items so order soon.

Competition
A reminder that OttOmobile runs a monthly competition. Enter by March 31, and you stand to win a BMW E39 M5, or a Citroen 2CV 4x4 Sahara - in fact, the 2CV’s main run has sold out, so the comp is your best choice if you want one!

There's more
Here's the MG Metro, a small city car that sold well in its home UK market for a decade or so. This was the sporty version of the original Austin vehicle, but of course the super-power 6R4 took little more than the basics from the plain-vanilla cars you might have seen nipping about British towns and villages of the time. 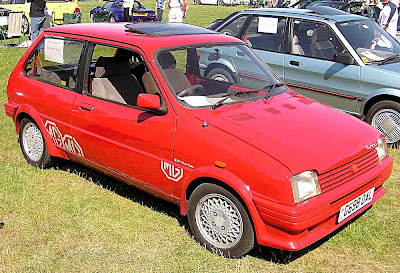 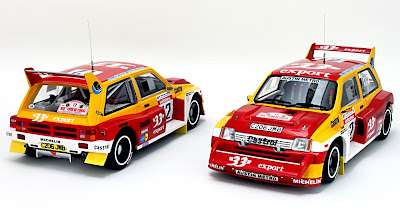