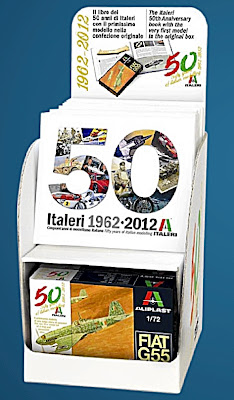 Leading kit company from Italy:
Italeri is making a birthday party of its half-century anniversary this year, by releasing all sorts of gear, such as a coffee table book, calendar, cap, t-shirt and commemorative 1:72 scale Fiat G.55 fighter plane kit. Where room permits, retail outlets may display the book-G.55 duo in point of sale displays like the one above. All this comes on top of an already packed monthly release schedule.

Plastic not pasta
Italeri was founded in 1962 by Giuliano Malservisi and Gian Pietro Parmeggiani. They were long-time aircraft and military vehicle enthusiasts, and reckoned they could do better than the stuff available in Italy at that time. They called the new company ‘Italstamp’, with the first scale model kit - a 1:72 scale Fiat G.55 Centauro - released under the brand name ‘Aliplast’.

Shorter name
Aliplast soon changed to the more poetic title ‘Italaerei’, a name that lasted a decade, until it was modified to create the shorter and punchier Italeri we know today. These days, the company is located close to the city of Bologna (a place much enjoyed by this writer for its stomach-stretching range of top restaurants and droolsome gelateria) and turns out thousand of kits each week. Italeri tries to put its own spin on subject matter, and reasonably enough, has modelled a wide range of Italian hardware. Italeri also owns other brands, including Protar and Supermodel. 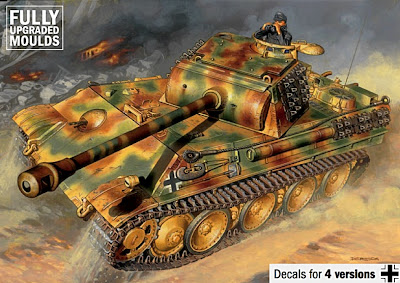 Hunchback of the air
On that Italian note, World War II aircraft range from the tiny biplane Fiat CR.42 to the Savoia-Marchetti SM.79 Sparviero (Sparrowhawk) also known ‘Il Gobbo’ (Hunchback) for the shape of its upper fuselage. There’s an excellent review of this underrated kit over at the Modeling Madness website - link below this article. Armoured fighting vehicles are another strong suite, with WW II hardware featuring strongly.

Plenty of metal parts included in the 1:35 scale Panzer tank (above), while the Chevrolet gun-hauler to the same scale (below) looks good. 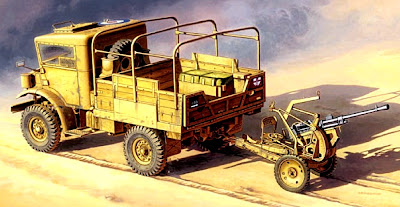 Motor torpedo boats
But where Italeri has cleaned up and made a market its own is with the quite superlative 1:35 scale motor torpedo boat range. These big kits include the US PT boat, German Schnellboot, British Vosper MTB, and Italian MAS. Smaller vessels to the same scale include the Italian Barchino and Maiale, plus the German Biber. Accessories such as the 1:35 scale modular dockside section (below) provide useful backup for dioramas. 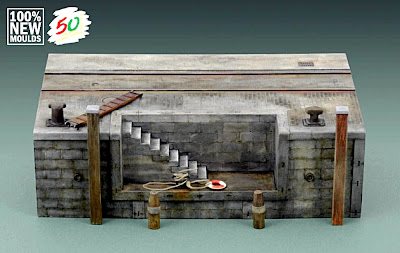 Trucks and trucking
Last but not least, modern trucks and trailers are a major Italeri theme - the showier the better! The Scania R620 (above) is to 1:24 scale, and is another 50th anniversary item, with sides covered in suitable markings. At this scale, the Scania is a biggie - when fully assembled, the 14-wheeler stretches some 720 mm (28.3 in) long. 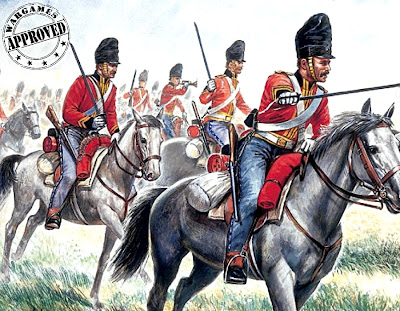 Wargamers are catered for with Napoleonic War 1:72 military sets.

Into the future
Eurozone financial problems aside, it looks like Italeri is set to see through another half-century of success. Short of a giant meteor strike or global meltdown spoiling the party, we fully expect to see Italeri kits still being produced in the year 2062. Whether we’ll buy them in boxes like today is another matter of course - we’d put our money on 3D printing at home from a downloaded set of computer instructions. But that’s a future article to watch out for!