INCOMING - CARTOON COUPE AND STRANGE TIME MACHINE FROM ROUND 2 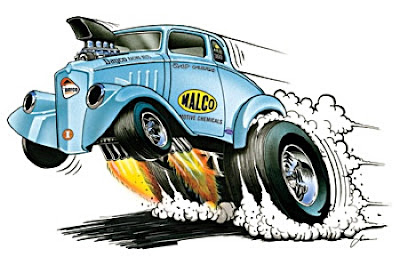 SMN Report:
Round 2 Models, owners of the AMT, MPC and Polar Lights brands, are well into a busy 2012. R2M has just signed a licensing deal to release models of the cars raced by drag racing champ ‘Ohio George’ Montgomery, otherwise known to his fans as ‘King of the Gassers’. This quarter-mile legend ran some of the best-known supercharged AA/Gas coupes ever, including the potent 1933 Malco Willys, which ran a best high eight-second time down the strip, topping out at 257 km/h (160 mph).

Easy assembly
Other Ohio George cars in the pipeline from Round 2 include the Malco Gasser Mustang, and Mr Gasket Mustang, and they’ll be following on from the Willys, which is a ’toon version of the real thing, a 'Snap Draggins' kit, modelled in a leaping cat pose - dream on Jaguar, the Gasser’s gotcha! Authentic markings will be in the box, together with components in light blue, black and chrome, plus clear and optional dark-blue tinted windows. It’s a snap-kit, so paint and cement are not strictly necessary, though as always with Snaps, you may well want to use both for more permanence in the build, and a better finish for display.

Base included
Aimed at younger model fans (and this older one) the Willys could make a good start into auto models, and a nostalgic one for fans of the drag strip’s glory days. Also included is an earth-textured base that keeps the model in a leaping pose. The kit should be available shortly. 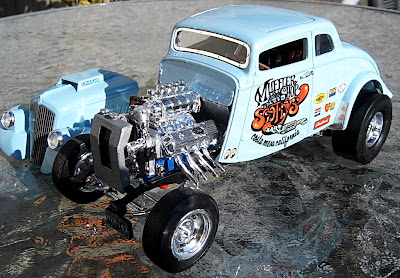 Vintage kits
If you like the world of drag racing, it’s worth looking at vintage AMT kits. This beautifully assembled Willys dates back more than 30 years and like the original machine, looks just great in baby blue finish. Pictured above courtesy Scale Auto Magazine, where there are several more pix - definitely worth a look, and the site address is at the bottom. 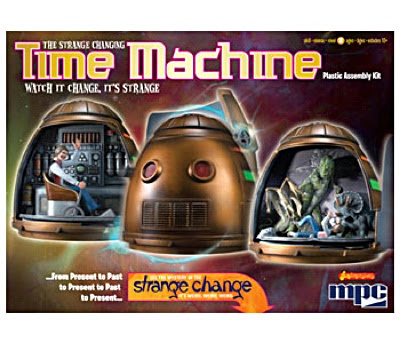 Time Machine from MPC
From the heyday of the drag races to the heyday of Victorian inventors, with this clever little kit, also due for release in April. It’s the ‘Strange Change’ Time Machine, returning to production after a gap of 40 years. It’s a new one to us that uses rubber band power to rotate the time travelling hero - based loosely on the HG Wells original - from his home in Victorian times to a trio of beasts from the age of dinosaurs. 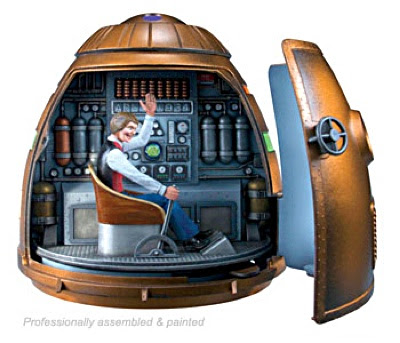 Paint and cement
It’s a terrific looking little kit, just 165 mm (6.5 in) across that we’re just itching to build. Unlike the Gasser Willys, this kit needs cement and paint. But the detail and fun-factor will make these easy chores to perform, and it’ll make a neat extra display in the SMN Hall of Sci-Fi Stuff - anything with a box that splashes the immortal words: “Watch it change, it’s strange” has surely earned its place alongside the oh-so-serious Star Trek lineup! 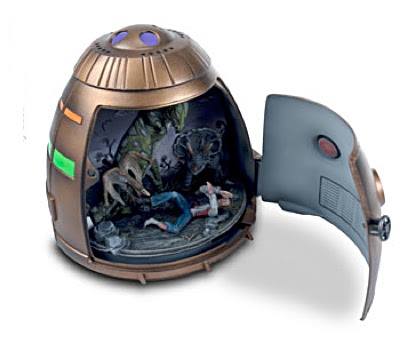 Heaps of bio info plus pix and other tasty stuff at George’s Speed Shop here. 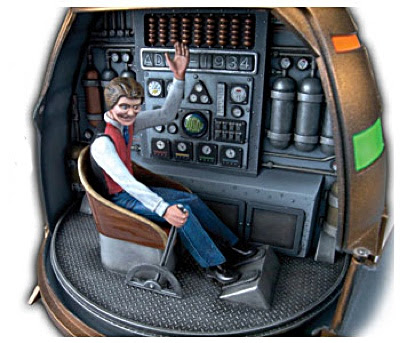 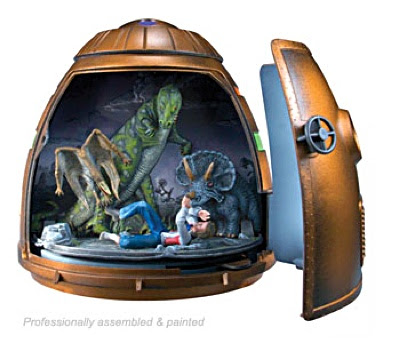