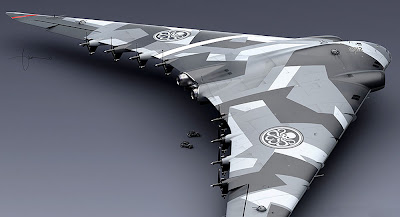 SMN report:
We’ve got a year of science-fiction models flying our way from Fantastic Plastic - and some of our huge faves are included in the list, starting with some handsome Luftwaffe 1946-style ironmongery from last year’s Captain America movie. 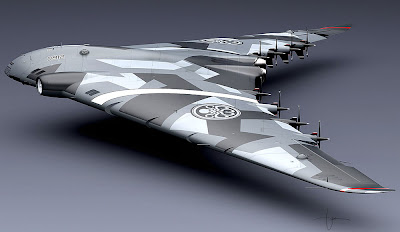 Flying Wing Attacker
Fantastic Plastic have chosen the huge, if fictional, Flying Wing for the first kit, due for release in July. This big bird formed the climactic setting of Captain America: The First Avenger. The Wing was designed by the outrageously talented Daniel Simon especially for the Marvel Pictures production, for which it was conceived as a ‘flying aircraft carrier’, with a wingspan of some 165 m (540 ft), more than double that of today's biggest jetliner, the Airbus A380. 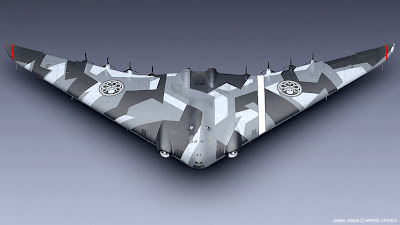 Weapons of mass destruction
As seen in the movie, the evil Hydra organization equipped its big bird with various defence guns, but the much deadlier claws of the beast are the eight Parasit planes that can launch independently, to drop atomic weapons on the US homeland. Each of the Flying Wing's eight pusher-props doubles as a Parasit tail-mounted prop, and all eight are used as a set of boosters for Wing takeoff.

Horten Wing and new ebook series
The Hydra Flying Wing was inspired by the real-life Horten Ho 229 jet-powered fighter-bomber prototypes, and the later Northrop YB-49. Look at the SMN logo top right, and you'll see the Revell kit of the Ho 229 up there - it's a nice little kit to assemble, and one that can be finished either as a 'real' Luftwaffe 1946 machine, or painted in more or less anything you like. There's one in fictional markings that we're using as a background prop for an upcoming sci-fi ebook series - we'll fill you in on this exciting project as it develops, so watch this space. 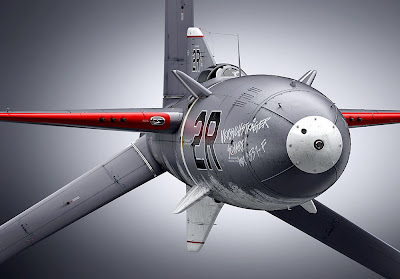 Deadly Flying Bomb
The Parasit was a single-seat flying bomb, eight of which were carried by the Hydra organization’s Flying Wing. Also designed by Daniel Simon, the Parasit used concepts explored by German aircraft companies during the latter stages of World War II, including ramjet-driven propellers, and a detachable nose-bomb.

Brief stats:
• Scale: 1:48 (thank you FanPlan - this one can sit with other models in a standard scale.)
• Other details to be confirmed. Planned release is a month after the Flying Wing, in August. 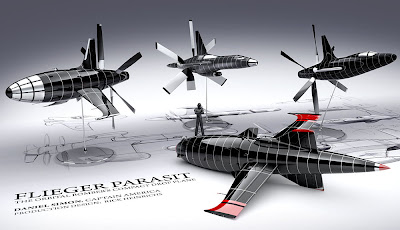 Can’t wait until summer 2012?
Daniel Simon’s super-sub (below) looks a cool device, and it too is a Hydra weapon. We found a nifty 1:35ish scale paper model of it, available as a free download. A problem (for SMN) is that the file type is .rar and we don’t have anything that’ll open it so far. Visit the ‘Paperhobby’ site to have a look for yourself here. 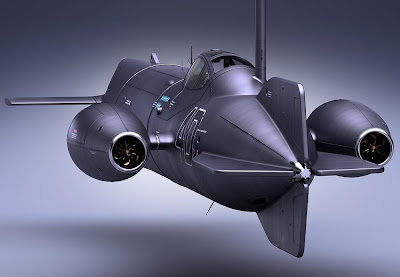