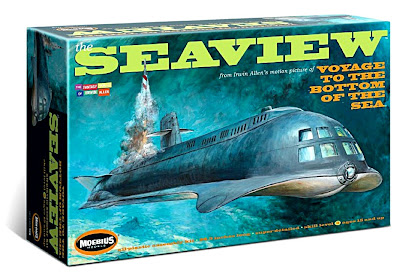 SMN report:
Moebius Models have posted some extra pictures of the latest Seaview submarine kit. When assembled, the kit should measure some 990 mm (39 in) long, and it looks very good indeed. In the words of one pleased modelmaker: “When they say huge they mean it. It is a big sub with some great detail work. I made the mistake thinking after I built it, my son could play with it in the tub, WRONG. I do not know what I was thinking...” 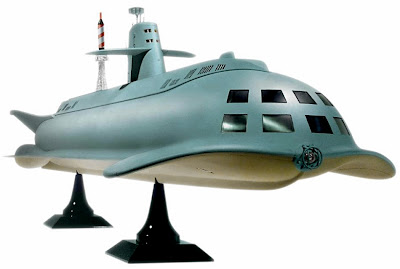 Cool model
He goes on to to say: “It was entirely my fault thinking he could play with it in the tub but it is really cool how big it is! Regardless, with exception of the few little antennas on top, it is very durable for a model.” So all big sub fans, the queue starts here! 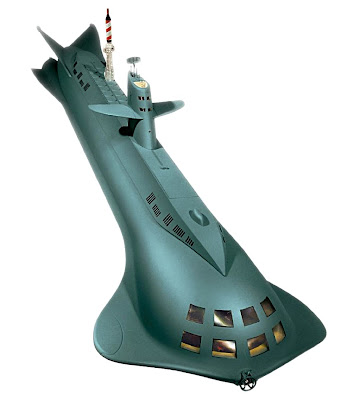 Aurora models
Both the Seaview and its marsupial Flying Sub have had several model kits created of them, both being originally offered by the Aurora Model Company back in the 1960s, when the TV show was running, and they’ve since been re-released several times. Moebius Models have issued versions of both the Seaview and the Flying Sub, each to a different scale. While these have been better than the 1960s-era kits, purists have noted that they haven’t been quite true to the lines of the original sub. This new one is in every way better - 'the real deal' seems to be the opinion of lucky modelmakers who have already got one.

Production background
In fact, the Seaview changed quite a bit during production of both the TV series and the 1961 movie. Three models were made, ranging in length from 1308mm (51.5 in), through (2590 mm (102 in) to the granddaddy 17-footer (5.18 m). The bow window arrangement changed too, with the first TV season and movie featuring an eight-square pattern, a simplified four-group appearing after that. 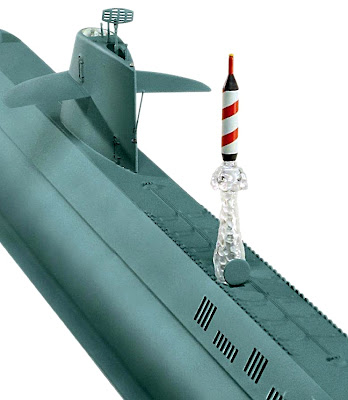 Restoration job
The three Seaview subs were constructed for $200,000 USD by the Herb Cheeks model shop at Fox Studios, the biggest of these having been partially restored and reportedly on show at the Science Fiction Museum, part of the Experience Music Project (EMP) in Seattle, Washington State. Now, we say that, but can’t find any reference to the sub, the series, or the movie on the EMP website, so if you can confirm or deny the boat's presence there, let SMN know.

Relax on the lawn
Sci-fi addicts might be amused at the words of one travel site: “This museum is not for everyone. Younger children can get quite restless, and non-science fiction fans will likely be bored. If your group has mixed interests, consider splitting up. While the science fiction-lovers enjoy this museum, the musicians can record their own CD at the Experience Music Project (located in the same building), the kids (of any age) can play in the arcade or go to the Pacific Science Center, or just relax on the lawn.” 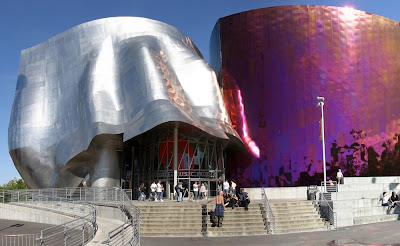 Ha - let them be restless! Well, at least architecture lovers can enjoy the wango-tango curves of the Frank Gehry-designed building (above): we reckon it’s totally mad, totally ace.

Reviews of the kit
Back to the Seaview, some reviewers point out accuracy mismatches between this kit and the various models used in production, but most are awarding good marks. This one is fairly typical, from James D. McWhite: “This model is large enough to convert to a working Radio Controlled (RC) submarine model. There are kits provided at Caswell Inc. that will help the model builder convert the very detailed Moebius model into the RC version. There are also internal and external LED lighting kits that can be added to this plastic model from Just and Illusion to enhance this model. Some of the lights are compatible to be immersed into water, and can be added to the RC version. It take approx 80 hours to convert the plastic model into the working RC version, add another 15 hours to equip the lights to the model.

James goes on: “...Joints are clearly defined and have been engineered to provide the most possible concealment. If you have any fond memories of the Voyage to the Bottom of the Sea TV series, you will enjoy putting together this model, as I have.”