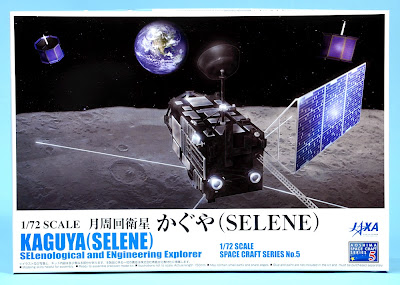 SMN update from Mat Irvine:
The Japanese kit company Aoshima continues to surprise us with brand-new kits in a growing range of satellites and space probes.

Greek and Japanese fables
Number five in this Aoshima series is the JAXA (Japanese Space Agency) space probe that was initially - and appropriately - called SELENE, after the Greek Moon goddess, though the acronym stood for SELenological and ENgineering Explorer. However a public vote in Japan added the popular title Kaguya, after the lunar princess in an ancient Japanese fable.

Mooncrash
Kaguya-SELENE was launched on September 14, 2007, reaching lunar orbit a few weeks later, on October 3. Its reconnaissance mission was designed to last until early 2009, after which the probe would have been deliberately crashed into the Moon’s surface, in August. However, due to a gyroscope failure, de-orbit went ahead earlier than planned, the probe hitting the Moon on June 10, 2009. 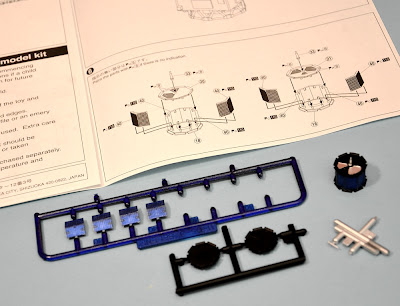 Aoshima kit components
The 1:72 scale kit follows a similar pattern to Aoshima’s previous space probes. The 69-part kit has a main rectangular spacecraft body, or bus, consisting of six parts, with small details taking up most of the other components - reaction control motors, lunar insertion motor, support connections to the H-II launch rocket, and a high-gain communications antenna. 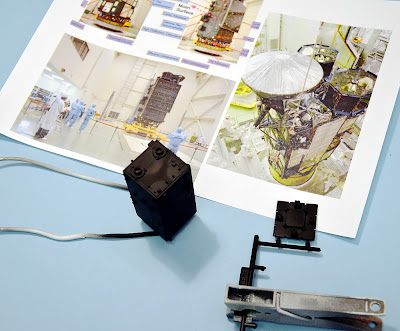 Checking details against a printout from the internet. Here the bus is first painted matt black

Smaller satellites on board
Kaguya also carried two sub-satellites. Initially named Rstar and Vstar, these too were renamed as Okina and Ouna, again after folklore characters.The surfaces of Okina and Ouna were mostly covered in solar panels, and in the kit these have been supplied in transparent blue plastic, though to look their best, the inner surfaces need to be painted silver, so the exteriors can gleam. At first glance, the two sub-sats look identical, but a closer look reveals that Okina’s top bulkhead is slightly different to that of Ouna. 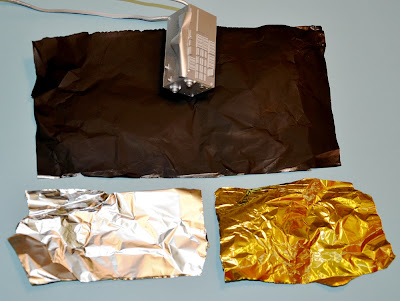 Foil improvement
As with previous Aoshima kits, the use of foil greatly improves the look of the model. But here the foil is not the normal gold or silver, instead being mostly black, to retain heat. So the usual silver or gold foil was simply sprayed satin black on one side, then spray-glued into place. Various areas on the bus that had been pre-painted silver were cut around, the foil carefully peeled off, allowing the silver panels to show through. 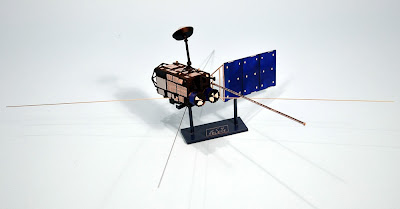 Wire rod antennas
One thing different with this model is that the four antennas for the Lunar Radar Sounding Experiment, are supplied as wire rod, as there’s no way that injection plastic would be strong enough. However, the extendable mast that carries the Lunar Magnetometer is plastic - and can be fitted retracted or extended. Overall, the model is not a big one - the bus is just 90mm (3.5 in) long, but the antennas are much longer - with these, the model’s dimensions go up to a far more impressive 430mm (16.9 in). 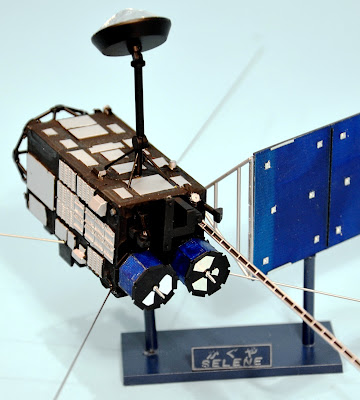 Delicate stand supplied
A stand is included, to hold Kaguya when finished, although it is slightly contrived - the probe is an awkward shape with the bus unbalanced by the single large solar panel on one side. This sort of thing may be fine for the free-fall conditions of lunar orbit, but not so good for display here in the Earth’s gravitational field - if in doubt, I recommend that you glue the model firmly in place! 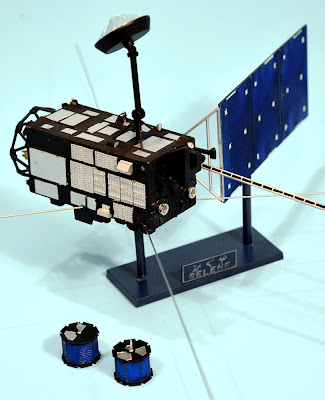 The sub-satellites can be attached to the main bus, or displayed separately

Return to the Moon
Intriguingly, Kaguya could be said to have helped restart major Moon explorations, as after this probe, JAXA had follow-on missions, as did the rising Asian space tigers, China and India. 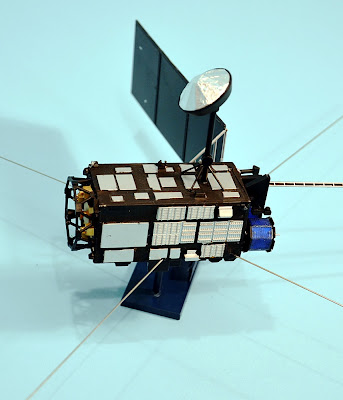 Summation
Another kit that helps keeps us space fans happy. It’s of an unusual subject which is good too, as there are a mighty variety of Apollo and Shuttle kits out there already. So thanks to Aoshima for bringing us the kit, and thanks also to Hobby Link Japan for supplying the review model.

There's more
Decent pix of the Kaguya-SELENE mission are available via JAXXA - the flightpath was a long one, which saved fuel, compared with the quicker direct routes made by Apollo missions. 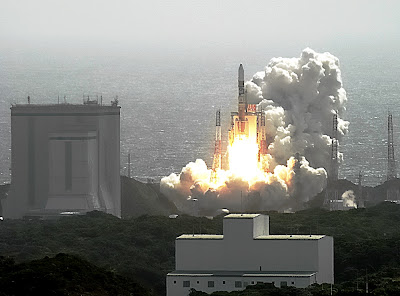 Launch by Japanese rocket in 2007. 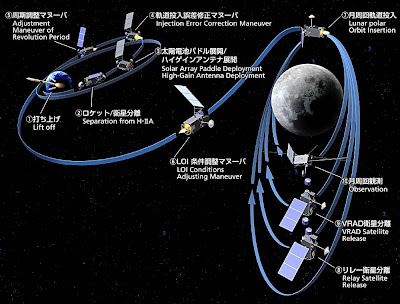 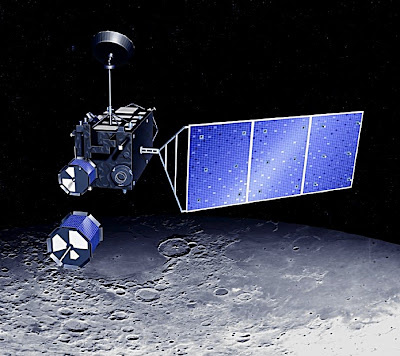 The sub-sats were released in lunar orbit.