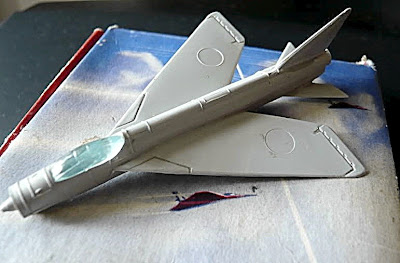 GRAZING THROUGH A BOUND VOLUME of old aviation magazines recently, we came across rare treasure in the form of ads for some barely remembered models and kits. With some scratching of memory cells, some did seem familiar, but we had to work hard to track down the story behind a full-page advert for the 'Vapour Trails' range of model aircraft. 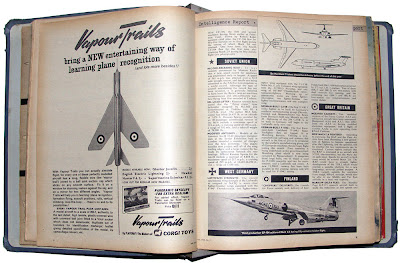 Our search led us to a collector site, with some interesting stories about Vapour Trails. Here's an example: "When I was very young (like about seven) I vividly remember my Mum ("to keep me quiet")... buying me a 'Vapour Trails' Gloster Javelin.

"It was in a neat little box, and displayed by sticking a piece of white flex into one of the jet outlets - the 'Vapour Trail’... I remember being allowed to choose from several on display and went for the Javelin because of the shape. Eventually, it went the way of all childhood toys, I'm afraid, but for some reason I never forgot it...."

The Javelin was a biggish chunk of plastic, even at the nominal 1:200 scale of the Vapour Trails series.  Also available was the English Electric Lightning (header, below) which was at that time was coming into service as the fastest interceptor jet with the Royal Air Force. 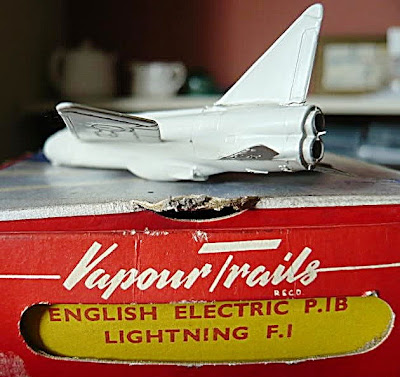 The Vapour Trail white flex included in every box did more than stick out of a tail pipe, for there was also a suction cup included in the small box, which you licked and stuck firmly on a window.

The idea was that the little aircraft looked like it was flying, once the flex was skewered via a ball joint into the suction cup. Self-adhesive decals were also included, while a positioning guide for the wing roundels was provided by somewhat clumsy circular depressions moulded into the plastic. 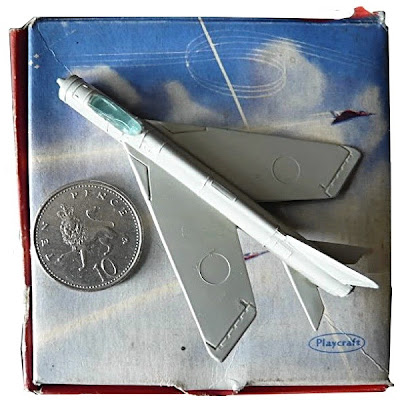 The range was introduced in late 1961 by Playcraft, which at that time also owned Corgi Toys. Apart from the Lightning and Javelin, other front-line jets in the range were a de Havilland Sea Vixen, Supermarine Scimitar, and Hawker Hunter.

In fact, Vapour Trails were not a commercial success; they soon disappeared from the shelves, and today are no more than a footnote in modelling history. 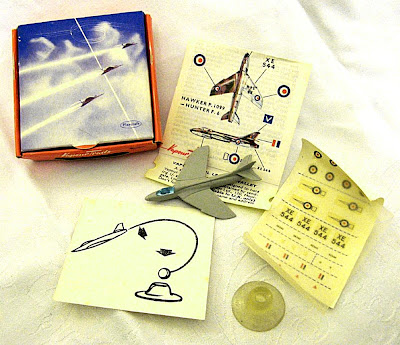 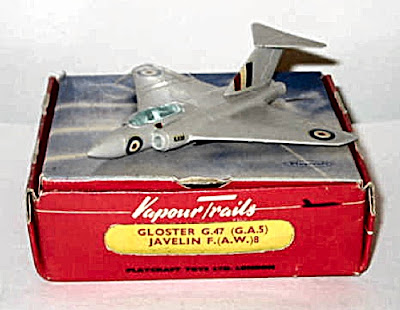 We've talked to older collectors about Vapour Trails, and one of them recalled his disappointment with a teenage purchase of the Hawker Hunter. "When I opened the box - which was pocket-size in any case - the Hunter lurked in a corner like a forgotten bit of kit moulding. It was so small - the wingspan was barely two inches (50 mm) across!" There was another problem, too. "Despite my best efforts and endless licking, the suction cup kept falling off the window!"

So the small size and lack of stick-factor seem to be two key reasons why Vapour Trails failed to become popular, or go beyond the limited range of British jets. Even so, Vapour Trails are still available online, though rarity means that they are not cheap. We found the Gloster Javelin delta interceptor (above) on eBay at a ‘Buy it Now’ price of £99.99 GBP ($158 USD).

We also found the Vapour Trails Hawker Hunter (below) on eBay this week. Last time we looked, it had just been relisted at a starter price of £27.00 GBP ($41 USD). Vapour Trails come up from time to time, so if this one is gone, there'll be some more in times to come. 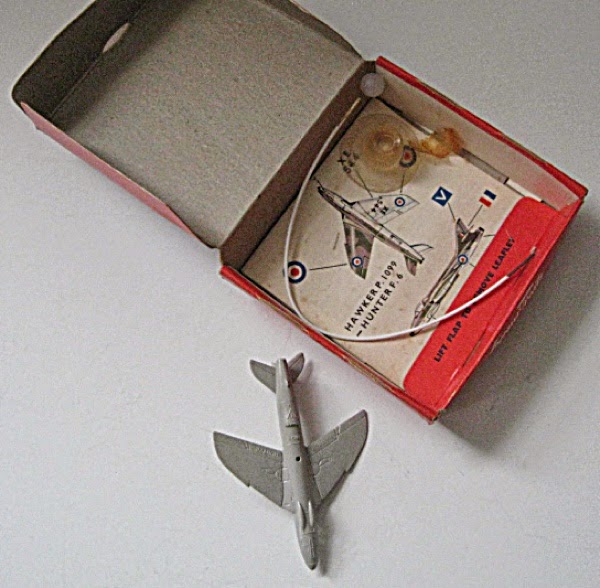