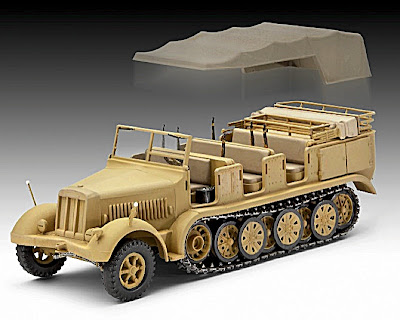 SMN report:
With their aircraft models, Revell have given us some aces in big 1:32 scale, but now it’s time for a kit in the smaller ‘classic’ scale - 1:72 that is. Coming to the front line in a couple of months is an extremely neat model of a hugely successful World War II German half-track infantry hauler and gun truck. 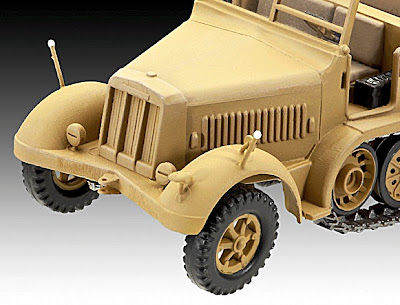 Successful half-track hauler
The Sd. Kfz. 7 eight-tonne medium half-track infantry vehicle was in widespread use with the German Army throughout World War II. Used on all fronts, the Sd. Kfz. 7 could carry a dozen troops plus their kit. It also hauled munitions and other loads, including the equally successful 88 mm mobile anti-aircraft flak gun. As well as being a strong hauler, the Sd. Kfz. 7 was no slouch so far as top speed went - on reasonably level territory, it could carry a full load of fighting men at up to 50 km/h (31 mph). 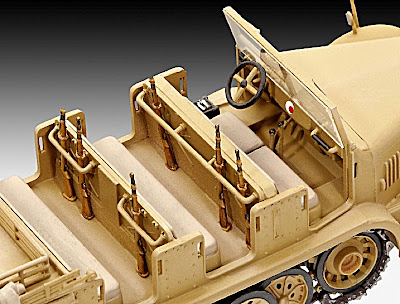 Well detailed kit
To 1:72 scale, the Sd. Kfz. 7 may be kinda bijou, but it’s none the worse for that, including heaps of detail for this scale, such as well-produced suspension units, convincing driver controls, and even some rifles besides, though note that fighting personnel are not included, more’s the pity. There are 89 components, and when assembled the half-track measures some 96 mm (3.8 in) long. Looks like it’ll be a good kit when it arrives, though the relatively small 1:72 scale means that it won’t be a kit for the ham-fisted - then again this writer is a less delicate hobbyist than most modelmakers. 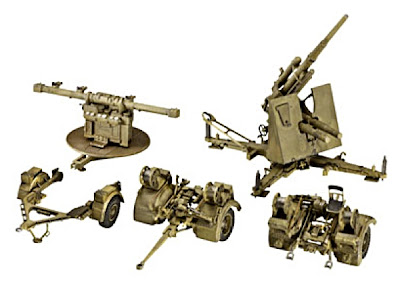 Anti-aircraft gun
An ideal match for the Sd. Kfz. 7 half-track is already available from Revell, and that’s the 1:72 scale 20-rounds-a-minute 88 mm anti-aircraft gun, a respected weapon widely deployed by the German Army in World War II. For all its small scale, this is a hugely detailed kit that builds into the full five-unit gunnery system used in combat. There are 200 components in the set-up (some parts are down to almost nano size!) and the two kits should look very good on display together, especially if combined with same-scale military figures, and some convincing diorama-style attention to a display base. Revell helps by including four different decal markings.