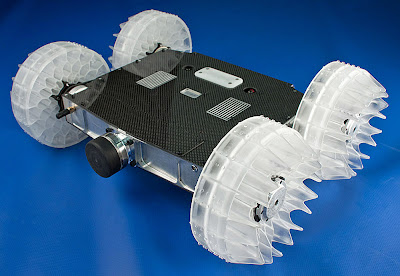 SMN report:
Sand Flea is a four-wheel robotic vehicle with an extra ace up its sleeve - on top of its normal radio-control (RC) mode, at the flick of a switch it can hunker down and leap high into the air - up a cliff, onto a roof, even over a wall!

Gyro and video camera
The Sand Flea can soar up to 9 m (30 ft) into the air, while an automatic gyro stabilizer maintains its attitude during flight, and to make sure of safe landings, which are cushioned by the big wheels. The gyro system helps keep the view from the onboard video camera clear and steady for the operator in charge. 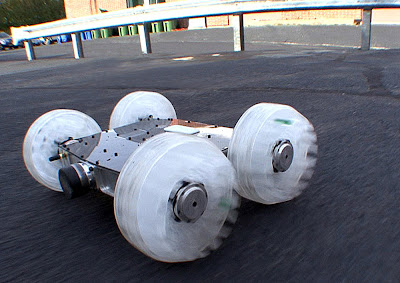 Leaping power
How does the Sand Flea make its jumps? The secret is simple - after rearing up on its rear wheels to take aim, the oomph for the leap comes from a CO2-powered piston that zonks the Flea off the ground. There’s enough pushing power in the CO2 cartridge to make around 25 jumps, though the last few will be somewhat breathless, we’d judge.

Recon machine
Sand Flea is not for civilians though - at present, R&D on the jumping robot is a strictly military affair, funded by the US Army Rapid Equipping Force as a recon device, its prime aim to keep human casualties in warfare at a minimum. The development outfit is Boston Dynamics, a high-tech company that builds advanced robots of all sorts. If you’re into robotics, look up BD’s amazing projects at the link address below. 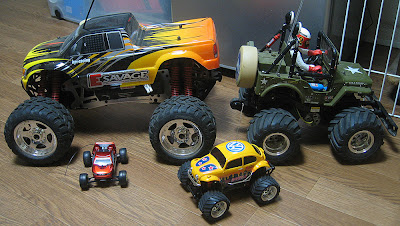 Available radio control kit
Meantime, consumer RC expands in leaps and bounds, with massive choice available, whether you want an off-road racer or a monster truck. Here are just a few examples of the tastiness out there. The RC group (above, clockwise from front left) includes a Team Losi Micro-T, an HPI E-Savage, Tamiya's classic Wild Willy, and a Kyosho Mini-Z Monster. Pic courtesy Sennen Goroshi. 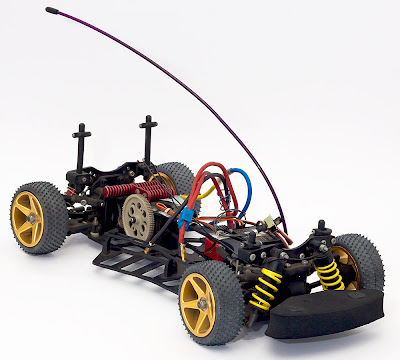 Complex innards
There’s tech-and-a-half in any RC vehicle, as you can see in this pic (above) of a Schumacher SST2000, less the battery pack. Pic courtesy ‘Jfitch’. 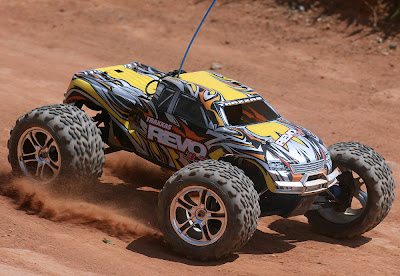 Electric or fuel?
Full-on off-road racers can be electric (above) or for more oomph in the rough, petrol or nitro-fuelled piston engines. Meantime, Tamiya's Wild Willy driver (below) has given competitors the finger for many years, and remains one of the best RC rough riders available. 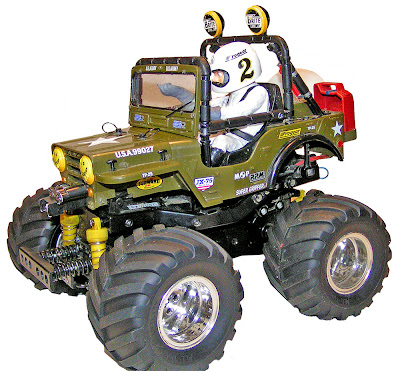