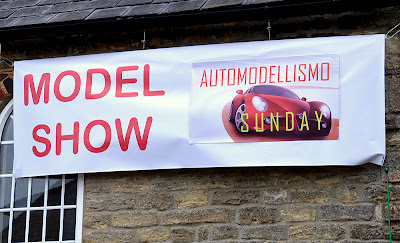 Show update from Mat Irvine:
The second Automodellismo Show - the show that features model cars inside and 1:1 scale classic cars outside - was very successfully held last Sunday, April 15, 2012. This is the second year under its new banner and location, in Hanslope village, Buckinghamshire, UK. 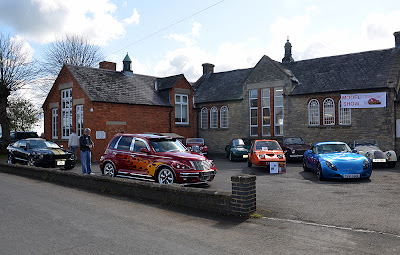 HaMeX model shows
Automodellismo is held under the HaMeX banner - Hanslope Model Expos - that now runs three model shows a year. Automodellismo 2 drew a wide range of visitors, and had a fascinating range of full-size display cars for them to drool over. Although this aspect of the show was really a ‘taster’, it immediately caught the attention of passers-by, and confirmed to anyone arriving that: “Yes, you are in the right place!” 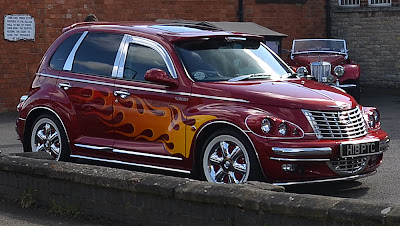 The PT Cruiser brought its very own mini-model show in the back. 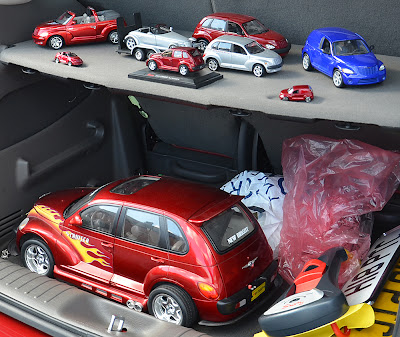 Auto visitors
A dozen cars graced the car park, though not all at the same time, as some had to go early, others could only arrive late. It was an eclectic mix, ranging from a brand-new Morgan Plus 4 to a 1928 Austin 7. Add to that a Bond Bug three-wheeler (any colour you like, so long as it’s orange), a subtle purple BMW M3 convertible, and a Lotus Elan S2, and let’s not forget - as it was difficult to miss - a tricked out Chrysler PT Cruiser, complete with a wild flame job down the sides. So, if anyone had any doubt that something was happening at Hanslope Hall, well… 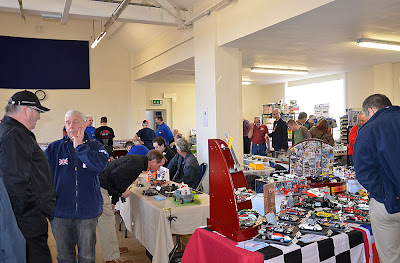 General view inside the Hall, which got pretty packed at times.

Miniatures on display
Inside, displays from model clubs in the surrounding area filled the main hall, and this year’s Automodellismo Award was presented to Simon Taylor, for his exacting build of a 1:12 scale  Tamiya Formula 1 McLaren MP4/6 in Team Marlboro markings. Simon’s model had been a labour of love, taking some two years to complete. 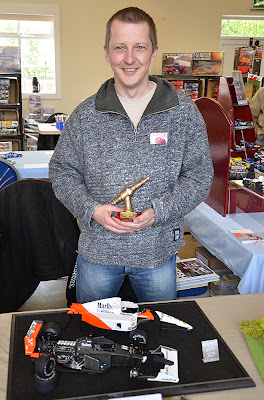 Les Garagistes club contradicted the sound of their name, and (below) celebrated a Diamond Jubilee of British motor sports. 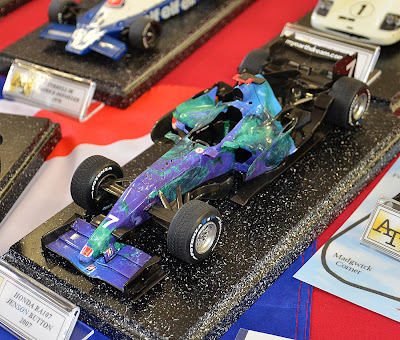 Links and next show to visit
More on Automodellismo 2012 can be seen on the HaMeX website, link below. There are also details of the next show - smallspace - featuring models on the linked themes of space, science-fiction and fantasy. Make a note in your diary - it’s another one-day special, to be held on July 1, 2012.