'DARK SHADOWS' FIGURE KITS FROM ROUND 2

New boxes are reproduction of the originals.

Supernatural stars
Barnabas is the more important Dark Shadows character, having starred in 594 episodes from 1967 to 1971, the werewolf appearing in just 97. The kits are reminiscent of Aurora kits, in that the subject matter is what Aurora excelled at, though overall they aren’t quite as well executed. Round 2 - current owner of the MPC brand - has reissued the two kits in virtually original MPC form, but with one major change. Originally the arms of both kits were supplied only in flexible plastic, with a metal rod bent into shape using a supplied armature, so they were ‘posable’. It’s an interesting idea, but it doesn’t really work - the ‘flexible’ parts are not flexible enough. I suspect a harder grade of plastic was used here than in the originals. 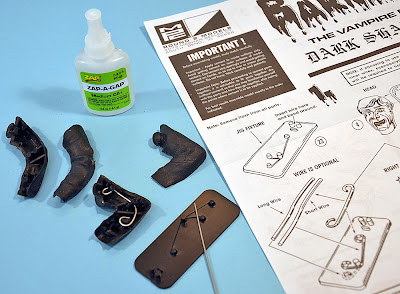 The jig, wire and vinyl arm parts (above) were also features of the original kits, but are really not worth using. 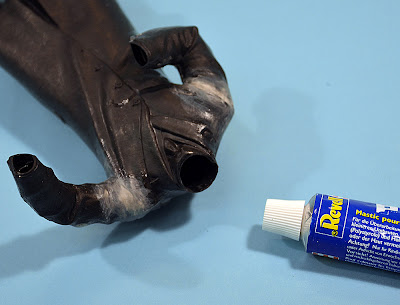 Using putty (above) to fill the gaps round the movable arms. Below, standard black and duplicated luminous parts. 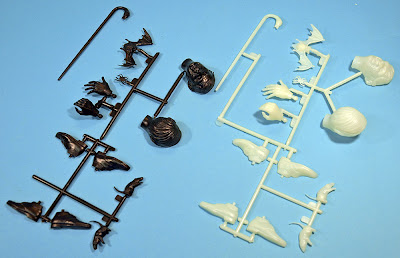 Luminous parts
Fortunately Round 2 realised this as well, and acknowledged that most modellers these days would prefer a kit without any compromises. Consequently, arm components are also included in standard styrene, so you can go either route. However, one original feature that matched Aurora is that some parts are supplied twice - as well as standard black styrene, you get the same parts in luminous plastic. This feature Aurora used in many of its own reissued figure kits. The luminous parts can be used or not (or used and painted over), but the arms, hands and legs are also supplied as movable limbs. However, this leaves gaps, so my recommendation is to fill these with putty and build the whole figure as a static model. 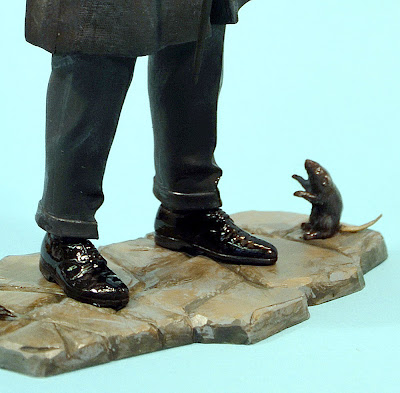 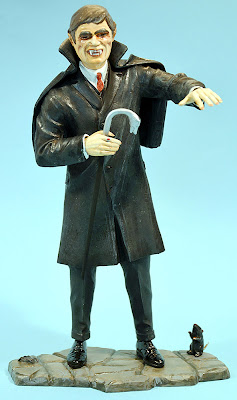 Base and critters supplied
Just as with Aurora kits (and the new Aurora-style Moebius figures, for that matter) Round 2 supplies you with a base and a few ‘additions’, here in the form of a spider, a rat, and a bat. A problem with the last creature is that whereas Aurora would probably have  supplied a tree branch from which to hang your bat (this was actually done with Aurora’s own Dracula kit), here there’s nothing for the bat to cling on to, and bats don’t tend to stand upright on their little legs. 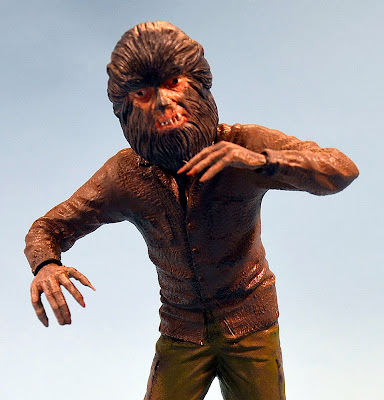 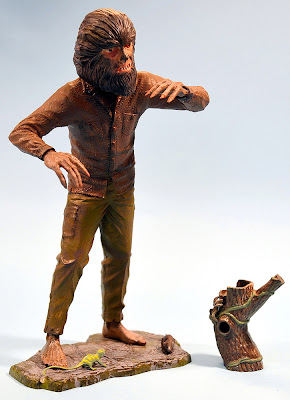 Component-count
The Barnabas figure is simple enough, consisting of 25 components, seven more if you include the ‘posable’ option, with 13 more if you include the duplicate luminous parts. The face does look somewhat like Jonathan Frid, the actor who played Barnabas Collins, though I can’t say the same about the werewolf, which just looks like a werewolf. The figure has 22 basic parts. Both figures stand around 210 mm (8.5 in) high. There’s no actual scale quoted, but this works out at approximately 1:9 scale 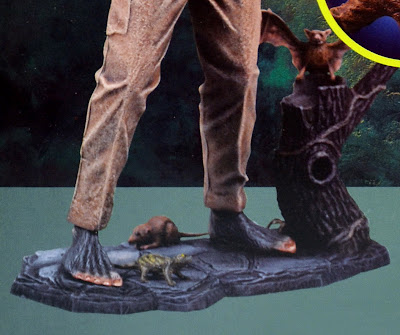 Dark Shadows history
Interestingly, though current talk relates to the new Dark Shadows movie, there was also one made in 1970. It used the same cast as the TV series, was made in colour, and related the same story, albeit with some changes. There were also remakes, with new actors, in 1991 and 2005.

However, and as a final piece of trivia, the 2012 movie lists four of the original Dark Shadows actors in the cast including Jonathan Frid, though so far we don’t know what characters they play.

RIP Jonathan
Jonathan Frid passed away recently, on Friday 13th. He was 87 years old. Thanks Jonathan for those hundreds of episodes. We're looking forward to seeing Johnny Depp's reinvention of your role. 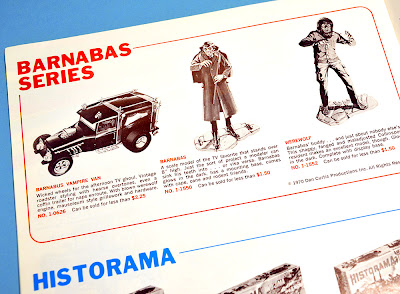 The three Dark Shadows kits, as listed in the 1971 MPC catalogue.

The attractive new box bases are packed with information.