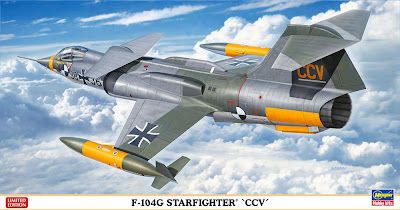 SMN report:
The Lockheed F-104 Starfighter was originally labelled ‘the missile with a man in it’, for its performance and for the tiny wings, seemingly too small to keep it in the air. The aircraft was widely produced, and one of the most interesting variations of the Lockheed jet was the one-off experimental CCV, now featured as a limited-edition 1:72 scale release from Hasegawa. 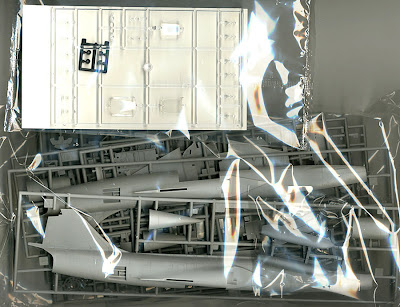 What’s in the box?
The kit appears to be a scaled-down version of the 1:48 scale Hasegawa CCV kit , but it’s none the worse for that, and it’s good to see a 1:72 scale kit of this unusual aircraft available from a mainstream manufacturer. The kit has 85 components, and can be made in three variations of the experimental CCV aircraft, flown in the early 1980s. 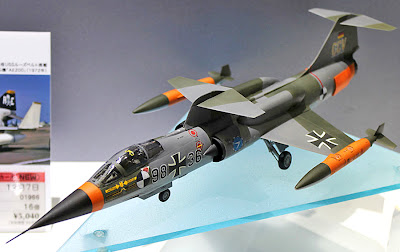 CCV components
Added to the basic Starfighter kit are a number of parts that change it into the CCV version. These include fuselage fairings, tail strakes, and the canard mini-wing to mount behind the cockpit. Also included are metal parts for nose probe and sensors, plus decal sheet with special markings. When assembled, the F-104G CCV has a wingspan of some 92 mm (3.6 in) plus the long fuel tanks on each wingtip.

Digital flight controls
So what was the F-104G CCV? The CCV acronym stands for Control Configured Vehicle, a mouthful indicating that the aircraft was a testbed for fly-by-wire technology, in which computer controls took over from traditional rods and cables. Important too, was that by going digital, the aircraft could be deliberately destabilized, a seemingly contradictory approach to flight management that actually results in an aircraft that is hugely manoeuvrable.

Forerunner of the Typhoon
First flight of the F-104G CCV was on November 20, 1980, from a test facility at Manching, southern Germany, the aircraft being flown in tests to prove that CCV actually worked - thus laying groundwork for the Eurofighter Typhoon of today, a front-line aircraft flown by several air arms, including those of Austria, Germany, Italy, Saudi Arabia, Spain and the UK. 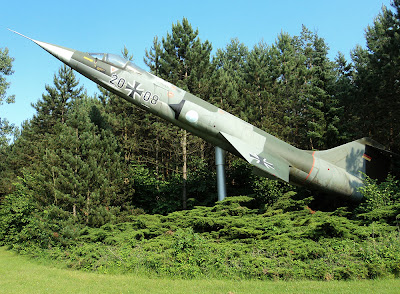 Starfighter today
There’s an ex-Luftwaffe F-104G on gate-guardian duty by the entrance to Manching (above) and do note the tiny wing, which was a special design using air bled from the engine to generate enough lift for takeoff and landing. The CCV vehicle itself survives today, and is on display (below) at Koblenz, Germany. Pic shown here courtesy Frank Van de Waardenburg and the Airfighters website. 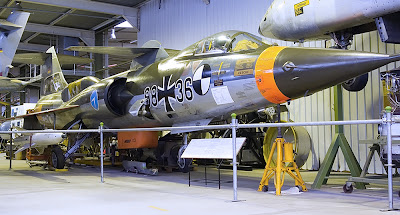 Summation
A neatly produced kit with custom parts in resin and metal of a very interesting aircraft, with space-oddity looks added to the already high-performance F-104G Starfighter. Should be available this month.

Starfighter stuff by the gazillion here.