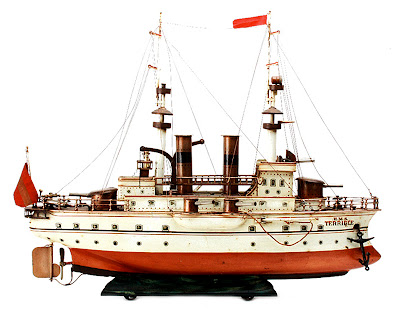 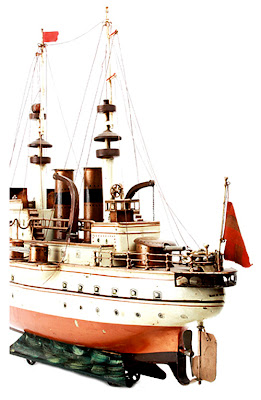 Collection on the block
The ship was a model of HMS Terrible, part of a lifetime collection of toys and trains belonging to the late Ron McCrindell, who died in August 2011, aged 91. Auctioneer Hugo Marsh said of the sale: "As far as we are aware it is the most expensive single toy sold in the UK." It was bought by an anonymous overseas collector, so sadly we can’t report on the excitement of owning this delightful collector’s treasure trove. The 620 mm (24.4 in) long vessel, made in 1905 by Marklin of Germany, was one of 340 toys on sale. The model itself made the headlines 40 years ago, when it featured in a BBC TV show, steaming across the calm waters of Hampstead Ponds, in north London. 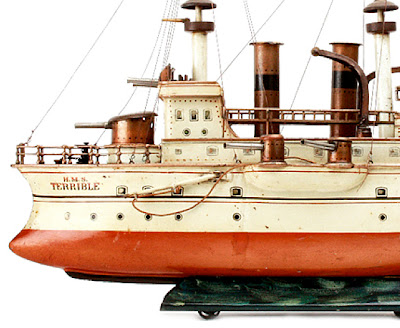 The Auctioneer’s description
We quote below in full, as it makes interesting reading, especially the mention of the TV series, and the real ship’s naval operations, though note that in Royal Navy service, HMS Terrible was classed as a ‘protected cruiser’, not a battleship: 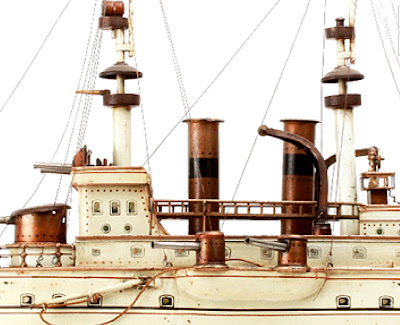 "...double-acting cylinder, safety-valve and slip-eccentric reverse, on wave-painted four-wheeled stand, circa 1904, G, one davit base repaired, lifeboats missing, one port side gun roof and searchlight replaced; see ‘The Art of the Tin Toy’, Pressland, D, New Cavendish Books, 1976, page 41, for illustration and discussion of this famous toy; for suitable Heyde for Marklin semi-round lead sailors to fit the deck-clips, see Lot 67 in this sale; see also the BBC2 television programme from 1972, ‘Ron McCrindell’s Toys’, in which Ron fires her up and runs her; the prototype was launched in 1895 and was involved in the siege of Ladysmith in South Africa in 1899 and the Boxer Rebellion in China in 1900.” 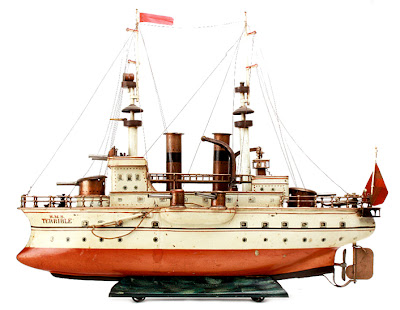 Free Marklin App for iPhone, iPad
Marklin is still going strong, with an international reputation for the excellence of its model trains in particular. These days, digital control  is the buzzword, and Marklin is a leader in this. There's also a free App available for those of us with iPhones and iPads.

Visit the App Store here for the useful and interesting Marklin App.

The real ship
The Terrible is shown below at the 1897 naval review to celebrate Queen Victoria's Diamond Jubilee. The ship was just two years old at this time, and note that Marklin's designers 'lost' a couple of funnels when making the model. The drawings illustrate the Terrible and her sister ship the Powerful. Each vessel was armed with no less than 42 guns of various sizes, plus a quartet of torpedo tubes. 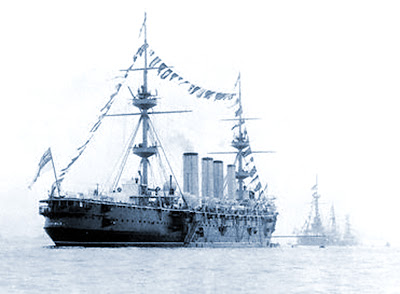 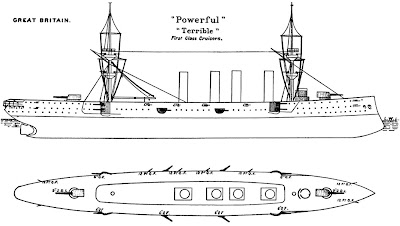