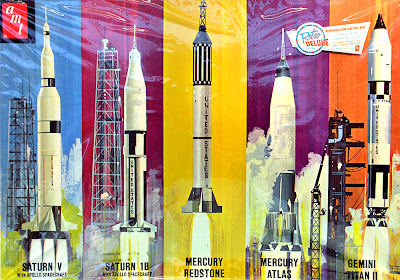 Mat Irvine reports:
AMT originally became the best-known producer of model car kits, but in the mid-1960s, the company was also known for issuing the first Star Trek kits. And, as an adjunct to the science-fiction, AMT also moved to science fact, producing the first - and to date the only - kit of all five US manned space launchers prior to the Space Shuttle. And now, here they are back again. 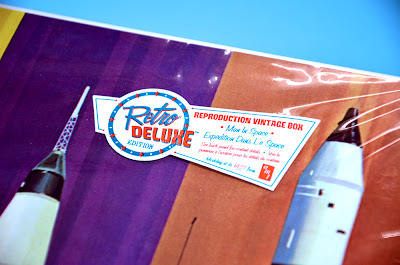 Small scale
In chronological order, the first five launchers were the Mercury-Redstone, Mercury-Atlas, Gemini-Titan II, Saturn 1B and Saturn V. Although the 1:200 scale chosen by AMT was smaller than the classic 1:144 Saturn kits from Airfix and Monogram, AMT made up for this in the first issue with a spectacular cardboard diorama setting that not only featured the sweep of the Kennedy Space Center, but also the launch tower assembly for the Saturn V. 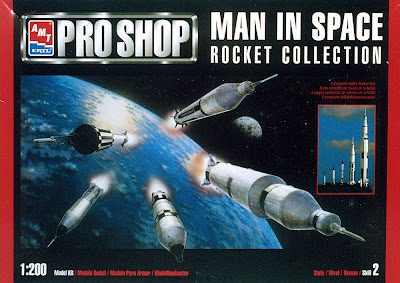 AMT Pro Shop range
First released in 1969, the kit was reissued in 1999 in AMT’s short-lived Pro Shop range, but was missing one vital element - that excellent card diorama was not included. Instead, the five rockets sat on a fairly bland rectangular moulding that had started life as the base for AMT model car display cases! 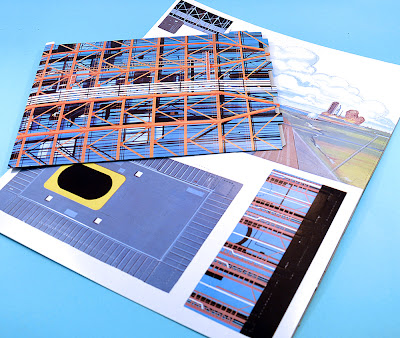 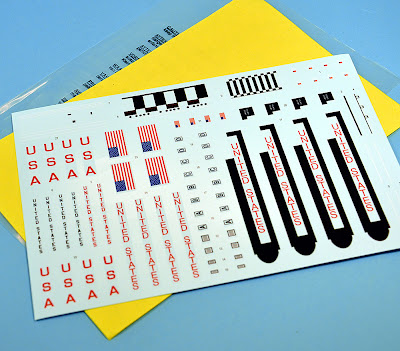 Stronger box
But now space modellers can breath a sigh of relief, as Round 2 LLC - AMT’s new owner - has reissued the kit as it was way back in 1969, and in some ways, it’s even better than the original. For a start, the box is a lot stronger, and there is a printed sheet for the base, which gives more details. The decals have been improved, and of course the splendid card diorama has returned - and even seems to have been printed on slightly heavier card stock. 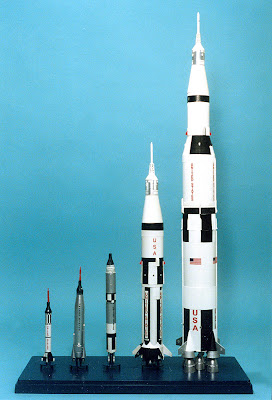 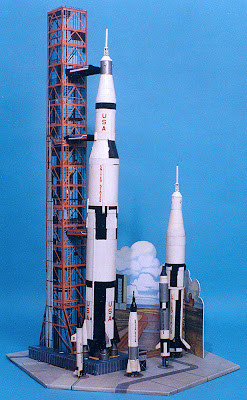 Service Module error
One slight problem for purists is that the two Saturn rockets still have incorrect Apollo Service Modules, depicting the unmanned Block I version. However, this has been a problem with all kits of the Saturn V, and still remains with most, although Airfix recently updated its kit correctly. But in 1:200 scale the markings are not that noticeable, and you can always paint on the correct pattern. 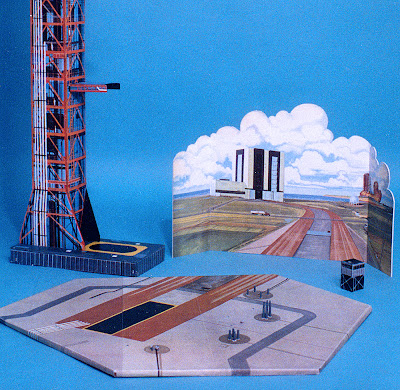 Summation
Overall you get almost 150 parts, moulded in white, and when assembled, the whole structure approaches a height of some 500 mm (20 in). This is an excellent return of the original that’s even better than before.

Thanks to Tony James at Comet Miniatures for the sample kit.