SMN REPORT:
The Spanish Lego fan Sheepo 2012 doesn’t seem to be too worried about the financial ups and downs of the Eurozone, maybe because he’s been hard at work building this 1:8.5 scale Land Rover Defender 110.

Details aplenty
Sheepo’s scratch-built Land Rover Defender 110 not only looks just so, but he’s built in details that include a five speed gearbox, a two or four-wheel drive system, working suspension on all wheels, and disc brakes that yank it to a halt, pronto. The Defender has a fully-detailed chassis, and working radio control system.

Building from standard parts
Engineering student Sheepo has stuck to the rules where kit-bashed Lego models are concerned - that is, only standard Lego parts can be used throughout. Not that the rules are too onerous, as the Lego Technic system is about as comprehensive as you’re likely to get, this side of a Formula One racing outfit. 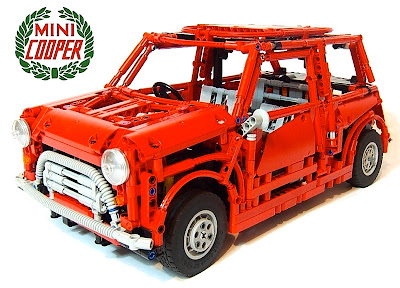 Another Sheepo Lego masterwork, this time a 1960s-era Mini Cooper.

Vote for the Defender
We’ve included a link to the interesting Cuusoo fan website, on which Lego builders can cast votes if they’d like to see a fan-made model put into production. To stand a chance of Lego taking up the challenge, you need to get 10,000 votes - last time we looked, the Defender had notched up 2394 supporters, so add yours if you like the idea!

And even more at Cuusoo.