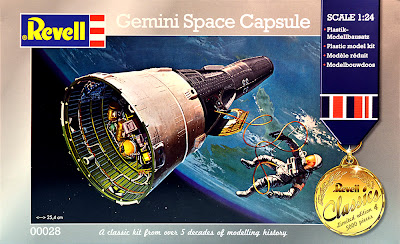 Weekender with Mat Irvine:
The 1:24 scale Gemini spacecraft was one of Revell’s most popular space kits of the 1960s, and now, if you missed the last reissue in 2000, it’s available once more in the 'Revell Classics' range. 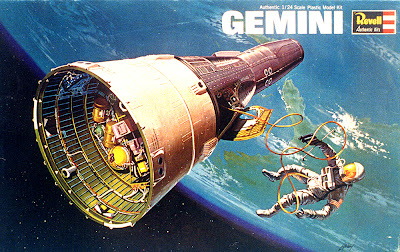 Different shades
The 88-part kit remains pretty much as first issued in 1965, except that this time round, you get components moulded in white. In the past, the Revell Gemini has usually been supplied in dark or mid-grey styrene, though dark-blue and even light-blue versions have been reported. There have been white ones too - when the kit was issued as a ‘History Maker’ in 1982 - but these appear to be rare, or restricted to kits issued in Europe. Incidentally, for this reissue Revell scanned my original box, to use the artwork with the new design. 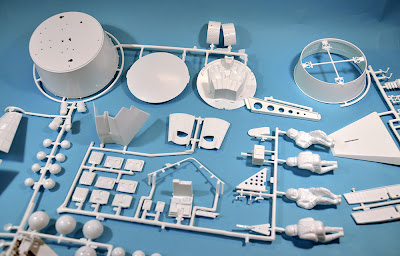 The parts are the same as before, but are now moulded in white. A few ‘The History Makers’ issues were also in white. 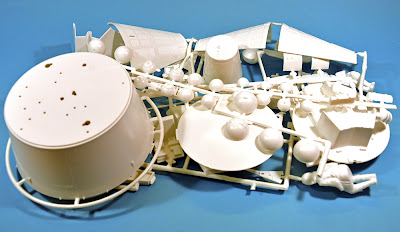 Spacecraft in white
White parts do make painting easier though, as two of the three real spacecraft sections were finished in white: the central reentry module that housed the retro-rockets, and the aft equipment module. Only the conical spacecraft itself was a different shade, and here we come to a modelmaker’s urban myth that’s persisted over the years.

Blue or black?
The Gemini craft itself was not, as so often quoted, painted blue - instead it was finished in black. It certainly had a metallic sheen, but it was still black. The misreported blue colour almost certainly originated with early NASA photographs, which often tended to be copies of copies, a process that almost invariably introduced false tints. Many images were also of mid-ocean recoveries, with lots of sky and sea, again leading to false impressions of the capsule’s colour. In fact, the black comes from special high-temperature paints applied for protection from re-entry heat. So, it’s best to ignore Revell’s instructions for a dark-grey finish - instead stick to black, with white for the heat shield. 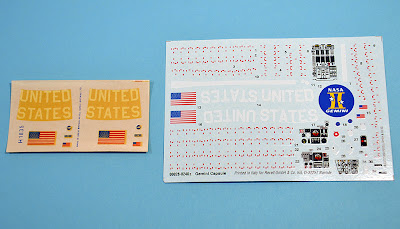 New decals (right above) compared with an original sheet, and with new plans (below). 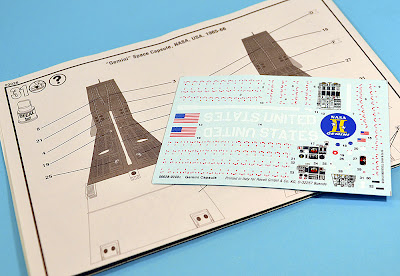 New decal sheet
The kit components have not changed with this reissue, but Revell Germany has taken the opportunity to supply a new decal sheet, with more markings. Now, as well as the national markings that you got before, there are extra decals for the instrument panels and the small red markings that appear over the shingles on the nose. Not absolutely all markings are included, but it’s a good start. For an even more comprehensive decal sheet, check out Rick Sternbach’s Space Model Systems, now available through CultTVMan’s online shop.

Accuracy issues
So far as accuracy is concerned, it’s worth pointing out that the 1965 kit was based on an early McDonnell-Douglas mockup. Most details stayed for the flight version, but some did change. So, yes, you can build the kit straight ‘out of the box’ and get a reasonable-looking Gemini, but if you want ultimate accuracy, then you need to go to Glenn Johnson’s RealSpace Models. 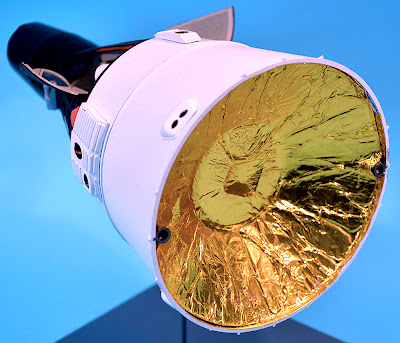 Conversion kit
Glenn Johnson makes a conversion kit with correct ‘scallops’ (the areas just in front of the hatches), thrusters, and module connectors. You also get an aft cover (above) for the equipment module, which actually saves you installing air bottles and other parts there, as this component literally covers the lot! The rear cover, here shown where I have covered it with the protective gold foil, that hid the equipment module contents. 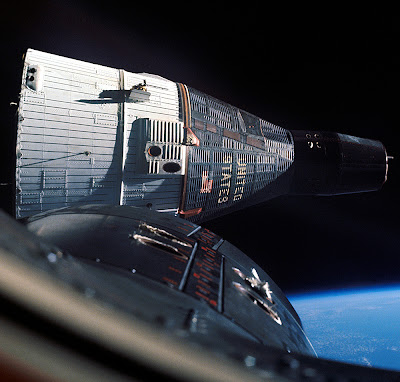 More detail
Interesting as the kit is, there’s plenty of room to add detail, and lots of it. For example, note the module ribs and rivets in this view (above) of Gemini 7, taken from Gemini 6 on December 15, 1965. 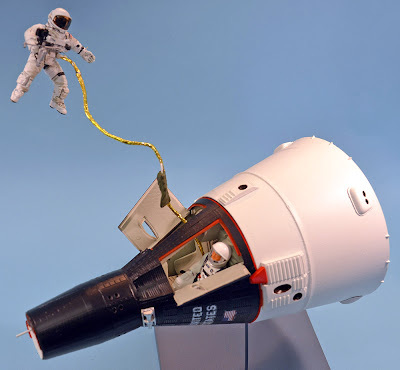 Open the hatch!
For that final touch, you could build a Gemini 4 featuring the first US space-walker, astronaut Ed White, when he floated in space on June 3, 1965 (above). Tomas Kladvia of New Ware makes a very neat 1:24 scale double-figure set of White, and his opposite number of the time, the Soviet ‘number one space-walker’, Alexei Leonov.

Thanks to Revell Germany for the review kit. 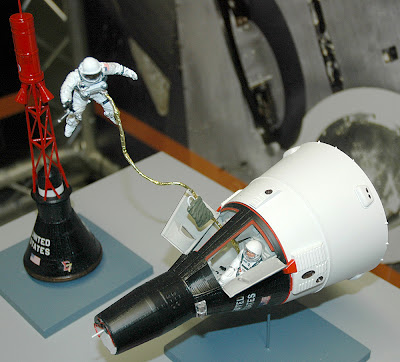 These displays are from the ‘One Small Step’ exhibition that tours the UK. You can see more on Mat Irvine’s web site. 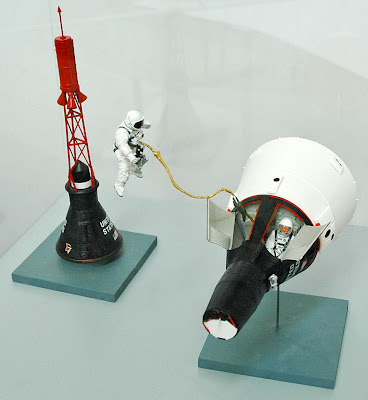