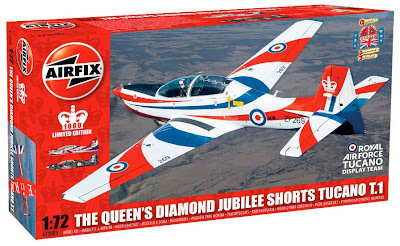 SMN REPORT:
Here’s a new Limited Edition kit from Airfix, on release to celebrate the Queen’s Diamond Jubilee, on June 5, 2012.

The Tucano kit is not new, so here’s a good excuse for Airfix to give it a fresh lease of life. As a two-seater, the Tucano is hardly a big model, especially to 1:72 scale, but is neat enough for all that. However, a word of warning - built as stock, it’s a tail-sitter and will need (in the words of one reviewer) a “neutron star” in the nose, to allow it to sit on its landing gear properly. It’s the only mainstream Tucano around, and despite some reported assembly fit problems with the basic kit, this newly-coloured version will add a bright splash to the display shelf.

Display scheme
The Tucano Display Team, based at 1 FTS RAF Linton-on-Ouse, Yorkshire, decided to paint its Shorts Tucano T1 display aircraft in a new scheme, to commemorate the Queen's Diamond Jubilee, 2012. The design is based around the UK’s Union Jack flag and intended to be highly visible against all backgrounds.

Created by designer Jo Gough, helped by the 2012 Display Pilot, Flt Lt Jon Bond and Display Manager, Flt Lt Rich Keeling, the Tucano's Union Jack topsides are balanced by white-on-red 'E II R' lettering underneath. The Tucano was painted earlier this year, and will be flying throughout the 2012 Air Display Season. 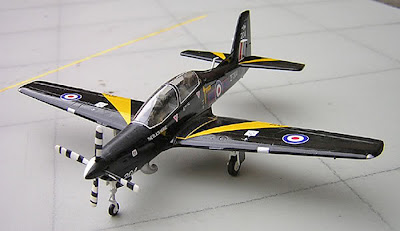 Black is beautiful
This extremely handsome black-and-yellow Tucano was made by ’Shaun’, over at the Britmodeller site. It's well worth a look, with more pix to see, link below. 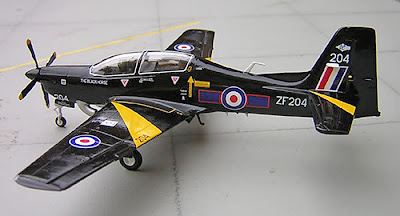 Summation
This kit is limited to just 1000 pieces world-wide and is available direct from the outlets below.