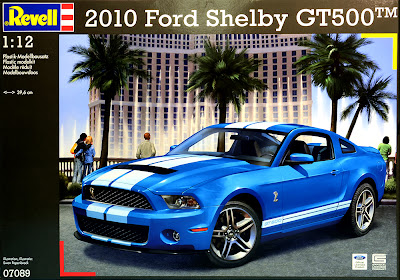 MAT IRVINE REPORTS
Carroll Shelby, one of the best known names in US motor sport, died last week, on May 10, 2012, aged 89. Coincidentally, Revell-Germany has just released a big, 1:12 scale version of the Revell-US Ford Shelby GT500 Mustang kit, thus helping to mark the long career of this motoring legend. 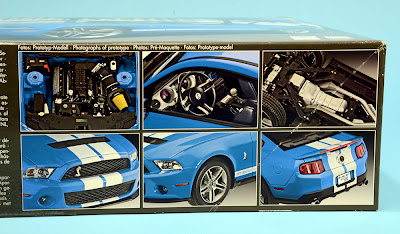 Big hunk of Mustang
The Revell kit features the 2010 model year Shelby GT500 Mustang, and in many ways this big kit is a direct enlargement of the earlier 1:25 scale kit. Consequently, although the model is larger, the extra size makes it easier to build, simply because the parts, all 145 of them, are that much bigger and easier to handle. 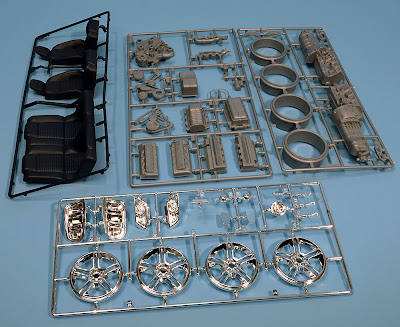 Some of the runners, here in black, silver-grey and chrome-plated.

Kit build options
Options for the model builder are minimal, but do include instrument styles, supplied as decals, and raised or lowered suspension. The included plans indicate the latter, but because of the multi-lingual nature of Euro-kit assembly instructions (now up to 21 languages) the option subtleties are not exactly clear. 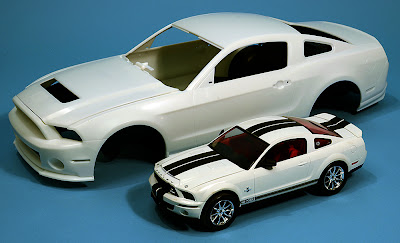 1:12 scale body with assembled and finished 1:25 scale version. The latter features on the cover of my Scale Car Modelling book.

Final result
Apart from those decisions, construction is a straightforward process, and you end up with a weighty hunk of model car around 400 mm (16 in) long, and a suitable tribute to a man who breathed power and speed into the standard Ford machine. As for finishing off, the comprehensive decal sheet provides a range of licence plates, suitable for various European countries. 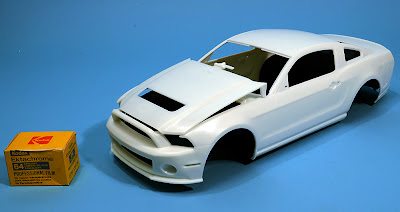 White body shown here with a blast from the past, a Kodak film box, as size comparison.

About Caroll Shelby
Starting out as a race car driver, Caroll Shelby (shown below) was a record-breaker and one of the very few Americans to win the classic Le Mans 24-hour race, when he drove an Aston Martin to victory with Roy Salvadori in 1959. A heart problem cut short his racing career, so he decided: “If I can’t race ’em, I’ll build ’em.” His most famous car was what became known variously as the AC Cobra, Ford Cobra, or Shelby Cobra - basically a British AC Ace sports car, with a US Ford V8 stuffed under the British ‘bonnet’ aka the American ‘hood.’ Shelby went on to add muscle and handling ability to the Ford GT, and a very successful line of high-powered Mustangs. 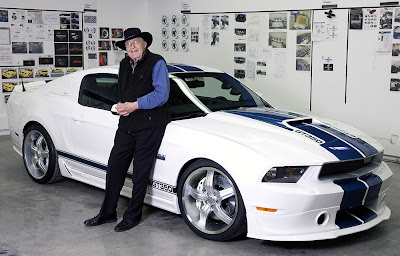 GM, Chrysler, back to Ford
The relationship with Ford lasted until the 1970s, and the oil crisis of those years. He went to Africa to run a safari park for more than a decade, but eventually returned to the US, working with General Motors and Chrysler, and was involved with development of the Dodge Viper. However, he finally returned to Ford, recreating his early successes with today’s new-generation Mustang, itself a model that echoes the original 1960s design.

The 1:12 scale Ford Shelby GT500 is in stores soon. Meantime, here’s a bunch of Shelby Mustangs, including my Scale Car Modelling book - and it’s marked down with a decent discount too! 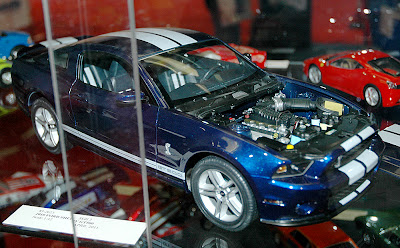 The kit as shown when new at the 2010 iHobby Expo show, Chicago (above, below) and as shown in January this year, at the London Toy Fair, 2012 (bottom). 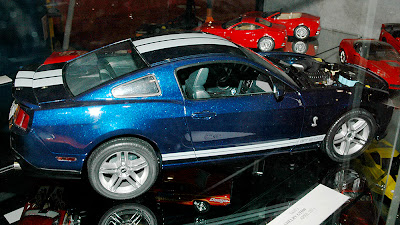 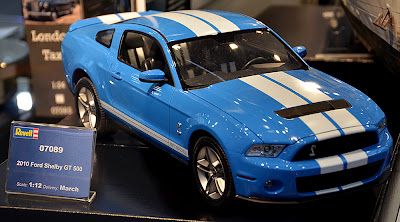