SMN REPORT:
Here is the eighth model in the 1:100 scale Tsubasa Collection EX range from Doyusha of Japan. The finely-built Mitsubish Zero fighter represents that of Tetsuzo Iwamoto, a top-scoring Japanese ace of World War II. 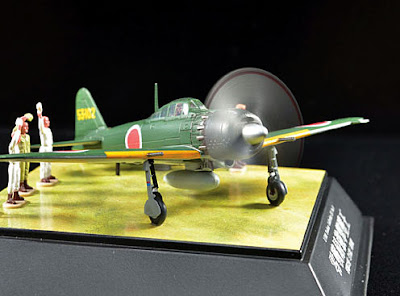 Spinning prop
Each model in Doyusha’s Tsubasa Collection is a ready-built mini-diorama, and this one is made to jewel-like standards. For a start, the propeller spins with a flick of the finger - the prop rotates via an electric micro-motor, running off a single AA battery that’s stored in the base. The battery item has to be purchased separately, otherwise the Doyusha Zero is complete and ready to run. Power runs through a thin tube between the base and the Zero, just in front of the tailwheel. 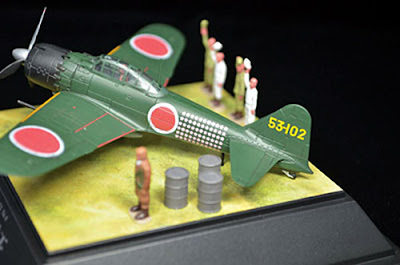 High-scoring Japanese ace
Otherwise, the pictures reveal all - the aircraft itself is fully-assembled and finished in Iwamoto’s markings, complete with the ‘kills’ panel - we haven’t counted them all, but his final confirmed tally was about 80 aircraft, though a private diary found after his death showed that it could have been as high as 202. 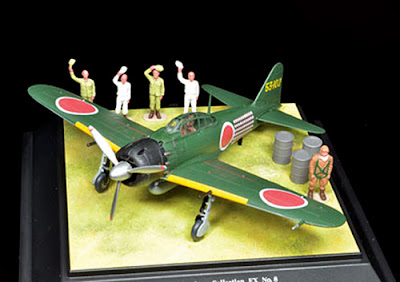 Extras in the diorama
Moving around the model we see a group of four staff waving off the pilot in the cockpit, while a trio of fuel drums stand on the ground behind the wing - let’s hope the pilot doesn’t make a quick start, otherwise they will take half the rear stabilizer off! We also get a standing pilot figure, dressed in flight gear and parachute. The plastic plinth keeps the whole thing together and makes a fine display base. 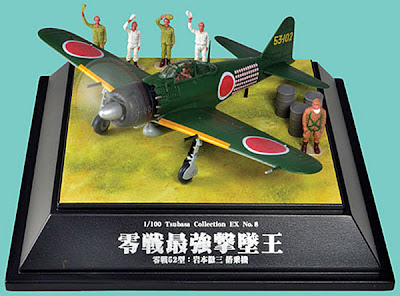 About the pilot
Tetsuzo Iwamoto (below) was blooded in air combat before World War II - in 1936, he became a Navy Air Corps Kasumigaura (student pilot) and in 1938 flew against the Chinese, during which he racked up 14 victories. His successful World War II combat career underlined several unique air combat moves, such as the snap roll with side-skid, and the corkscrew loop, which added a twist and skid to a standard loop. These two manoeuvres, and his yo-yo turn, were all designed to shake off attackers, then get behind them for a kill shot. 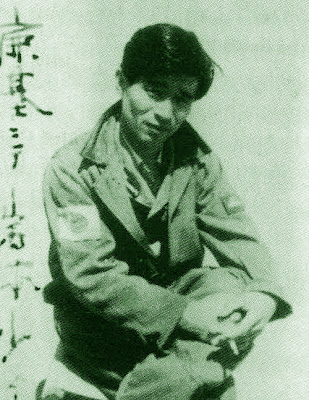 Summation
All in all, a fine 1:100 scale model that's especially suitable for the time-poor, who cannot or do not wish to devote the hours necessary for assembling and detailing a kit.