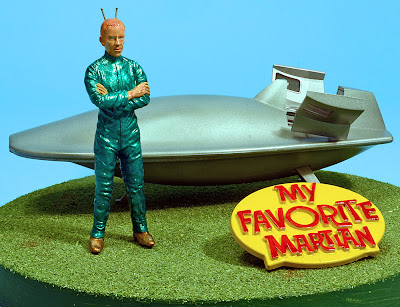 THE QUEEN’S DIAMOND JUBILEE WEEKENDER FROM MAT IRVINE:
Here’s another unusual science-fiction kit from Pegasus, this time a 1:18 scale model of the mini-spacecraft that featured in the classic 1960s US TV series ‘My Favorite Martian.’ 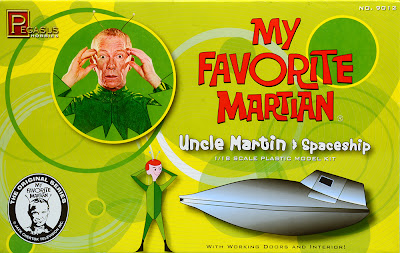 A question of scale
There have been a few limited-edition kits of the spacecraft flown by ‘Uncle Martin’ the Martian, but here for the first time we have his ship produced as a conventional injection styrene kit. It’s a small craft, in reality built full-size by the special-effects props department at Desilu from a design by James Hulsey, and here Pegasus Hobbies supplies it to 1:18 scale. 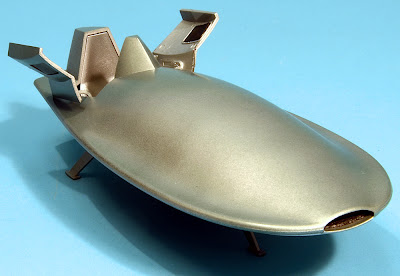 Not too small please
Given that the craft is the size-equivalent of a sports car rather than a huge spaceship, I mentioned to Pegasus’ founder, Larry Thompson, that it’s a pity it couldn’t have been 1:24/5 scale to match most car kits. Larry said that he’d contemplated this, but the result would have been too small - even in 1:18 scale Uncle Martin’s craft is not that large, only measuring about 175 mm (7 in) long when assembled. 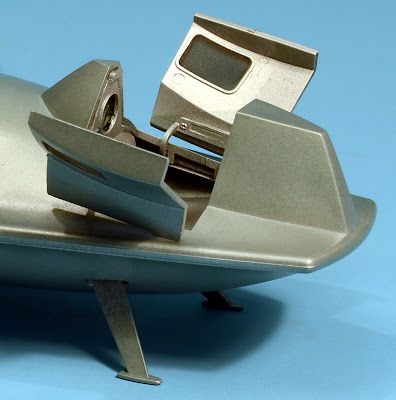 Easy construction
It’s a simple kit, with all of 16 components to put together. Even so, these include opening cockpit doors, a seat, and the instrument panel in clear plastic. One small warning - the port and starboard windows are slightly different sizes, so don’t mix them up. There’s also Uncle Martin himself, with separate parts for his twin antennas. In the series, these could extend from his head and make him invisible - in the kit, they are fixed. The figure is moulded in vinyl, so acrylic paints are best - enamels never dry on vinyl, though you can use a primer coat, with enamel on top. 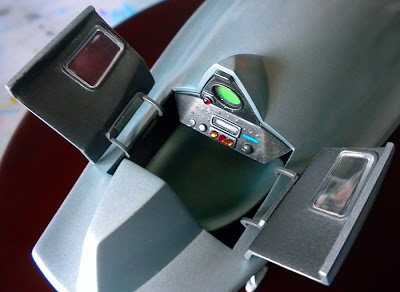 Painting the model
In fact, this is what I did with this figure, painting it first with Humbrol’s new acrylic grey primer, then acrylic matt white, and finally with one of Revell-Germany’s metallic colour range, as his suit, (for the first two seasons anyway), was a bright metallic green. The ship is listed as ‘silver’, but although I first painted this colour, I finished it off with a mist coat of Testor’s Silver Fox, a pale metallic-blue. 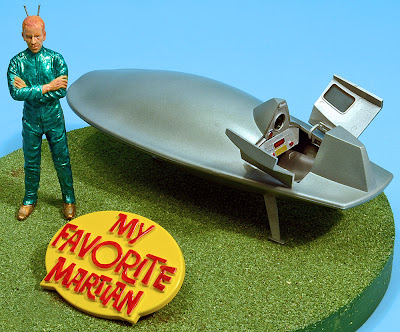 Diorama base
The kit is supplied with the retro-style logo plaque logo you see in the photos, but not the base. This item I made separately from scrap components stored in my Model Museum. I reckon it sets off the figure and spacecraft well. 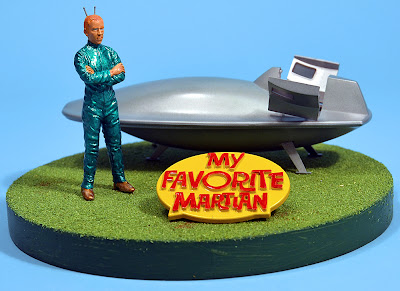 Extras
You needn’t stop with a base, for there are juicy extras available to take the kit up several notches in the presentation stakes. Voodoo FX has a neat lighting kit which allows the interior view-screen to light up. The kit comes with LED, wiring, electronic resistor, and fitting components. There’s also a detail set from Paragrafix, containing tasty photo-etch items like a control console, door padding, safety harness, and the delightfully-named CCTBS, or: ‘Cathode-Ray Centrifugal Time Breakascope.’ A set of micro-size translucent images are supplied for the screen, including one showing a tiny pic of the Horsehead Nebula.

Add a British sports car of the time
1:18 is perhaps a bit of an odd scale for a spacecraft, though a convenient ready-built car scale. So if you can locate one, a Triumph TR4 would look good parked door to door with the spaceship, as this was the brand driven in the show’s first season by Tim O’Hara, the Earthling co-star. 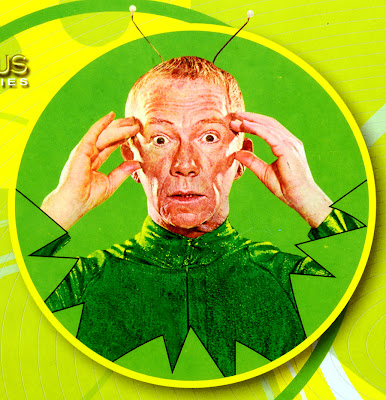 About the TV show
The TV series ‘My Favorite Martian’ ran from 1963 to 1966, most episodes being shot in black and white, with the final season in colour. The premise was simple - a Martian anthropologist crash-lands on Earth, conveniently in the Los Angeles area, close to Desilu TV studios, home of the series. The spacecraft is discovered by local reporter Tim O’Hara, and to save awkward questions, Tim passes off its Martian pilot as his ‘Uncle Martin’.  The Martian’s actual name was apparently Exigius Twelve and a Half, which would be a pretty odd handle, even in LA…

Earth repair station
Each episode revolved around the interaction between Tim and Uncle Martin, helped by good casting - Bill Bixby played Tim, Ray Walston was Uncle Martin. Backstory to Martin’s continuing stay were the repairs needed by his one-Martian spacecraft. 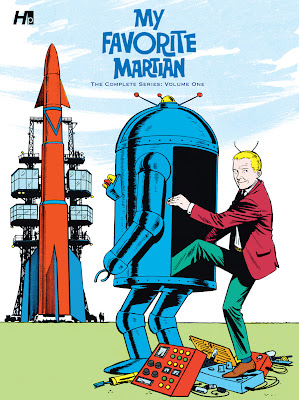 My Favorite Martian remake
The series had a makeover in 1999, with Jeff Daniels featuring as Tim, Christopher Lloyd as Uncle Martin, but like so many remakes, it wasn’t a patch on the original. Ray Walston made a cameo appearance, though he died not long after. Bill Bixby had passed away six years earlier, though he had appeared widely through the years, his best-known role playing Dr Bruce Banner, aka The Incredible Hulk.

Summation
An unusual kit in an unusual scale for the subject area. If you like retro cult science-fiction, you’ll love it. It’s easy for beginners, yet has potential for diorama lovers, and with the add-on detail-up sets available, there’s plenty to hold the attention of the expert modelmaker, too. Highly recommended, especially as the resin Uncle Martin figure is a good representation, even if his antennas don’t retract. 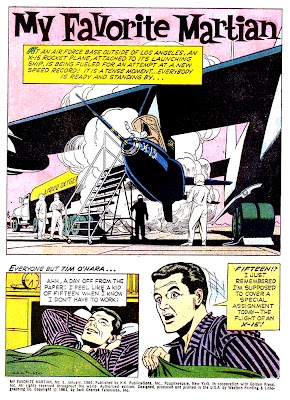 Pages from two My Favorite Martian comics of the time. The one above is the series starter, in which Tim O'Hara is covering the flight of an X-15 rocket-plane. 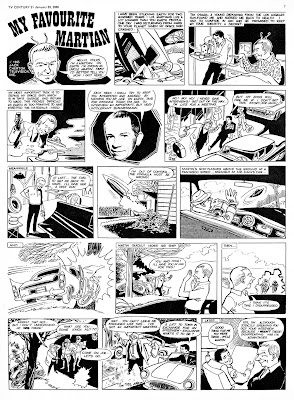