SMALL SCALE APOLLO KITS - AND A CHANGE OF COUNTRIES 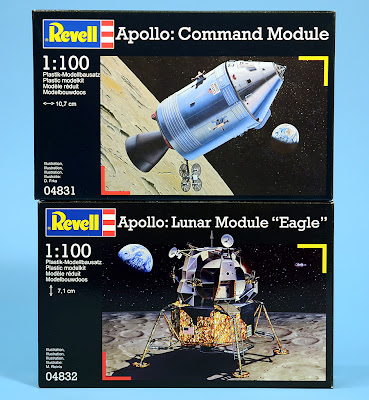 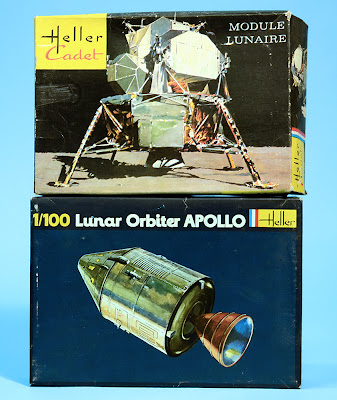 Small scale space kits
Anyone who is familiar with Revell space kits knows that Revell has made small-scale versions of these subjects since the 1960s. But you may notice that the scale of these two kits is listed as 1:100, whereas the original Revell kits were released in 1:96 scale. Note also that the Command Module kit has the cylindrical Service Module included - strictly speaking, the kit should be titled “Command and Service Module (CSM). 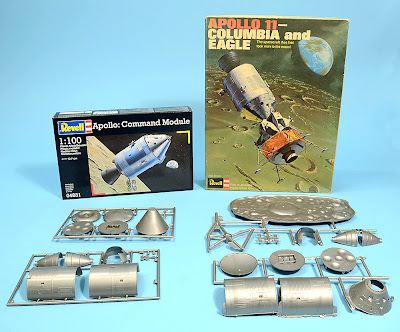 1:100 scale CSM (left). And (right) the 1:96 scale Revell version, showing that while parts are similar, they are laid out in different positions on the runners. Note the moonscape base.

Marketing mystery
As for the 1:100 scale, it could be a marketing convenience, as some kits have ‘changed scales’ in the past. For example, a number of Japanese aircraft kits, originally listed as 1:50 scale, have found themselves reissued in the slightly different, but more centre-of-the-market, 1:48 scale. But here 1:100 scale is correct, as the kits are reboxed Heller of France originals. Exactly why R-G has chosen to do this, instead of the reissuing the original 1:96 scale Revell version, is something of a mystery, except that you do have two kits that can be bought separately. The original 1:96 scale Revell kit has CSM/LM parts mixed between runners, so maybe that’s also a reason. Another may be that, although the 1:100 CSM is an near-clone of the 1:96 Revell, the 1:100 Heller Lunar Module (LM) is actually better.

Sans ‘Cadet’ this time, this is the only Heller issue that combined both CSM and LM kits. This was much in the style of Revell’s own version, even including a similar moonscape base, with a support arm for the CSM.

Inspiration
It’s pretty safe to assume that the Heller kits were originally inspired by the Revell, as this was first issued in 1969, whereas the first Heller release was the following year in the ‘Cadet’ series, Heller’s generic name for its smaller kits, especially those produced in ‘fit the box’ scales.

Take care with markings
As now issued, the two kits are reasonably simple, the CSM having just 18 parts. The Service Module is a Block I though, which makes it incorrect for manned flights. An attempt to correct this has been done with the paint scheme, which indicates painting correct Block II colours ‘over’ the Block I pattern. The box-art is correct for the Block II if you need reference. The decals hedge their bets, in that UNITED STATES is included for both the Command and Service Modules, whereas the Block II carried it only on the SM. You also need to remove two of the rings around the SM engine bell - three are moulded, whereas the real thing had only one. Again, the box-art is helpful, and indicates the correct one to keep. 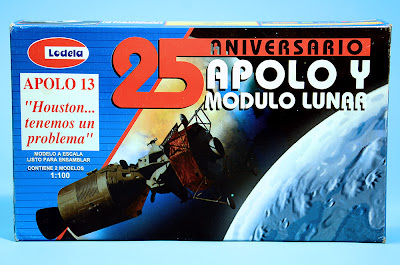 Unique in that it is the only kit ever issued as an Apollo 13 "Houston... we have a problem", this is the Lodela reissue of Heller's combo kit. Lodela is Mexico’s main kit producer, issuing many kits from brands such as Airfix, Heller, and especially Revell, under its own name.

Lunar Module with more parts
The parts breakdown for the CSM differs only slightly from the Revell version, but the LM is more complex, with 51 components. This brings greater detail, especially to the ‘porch’ - the platform at the top of the ladder - and to the steering-quad nozzles, which are individual parts, 16 in all. A nod is made to the correct colour scheme, though it is somewhat compromised. For example, the LM’s Descent Stage is listed as ‘gold’, though there should be several large black areas as well. Again, the box-art shows a reasonably accurate representation.

Summation
The last Moon landing, Apollo 17 in December, 1972, means that we have until the end of 2012 before we finish Apollo’s 40th Anniversary. Modellers haven’t done too badly at all, with Airfix reissues, Revell reissues, and brand-new releases from Dragon. And these two small-scale kits are ideal if you have only a small amount of display space.

Thanks to Revell-Germany for the review kits.