THE WONDER OF WONDERFEST 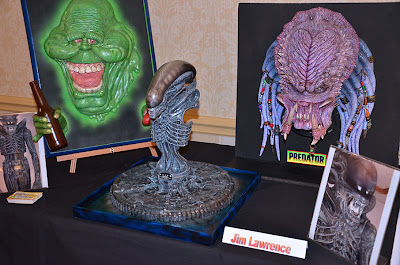 SMN EVENTER BY MAT IRVINE
Each year sees the Crown Plaza Hotel in Louisville, Kentucky, transformed into WonderFest - an event that presents all that’s wonderful in science-fiction, fantasy and horror model-making. WonderFest 2013 was held a couple of months ago, over the weekend of May 25-27, and your occasional SMN writer attended the show as a first-time guest. 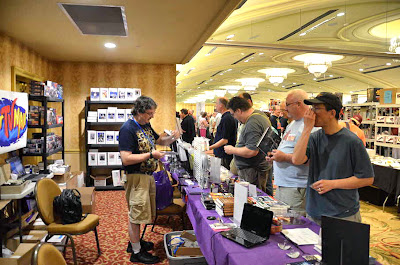 CultTVMan invite
All this was down to an old friend, Steve Iverson (on his stand above) who runs the CultTVMan website, who had been suggesting for a few years that I should, “Come over for the event”, and this year decided to sponsor me - so there was no argument! 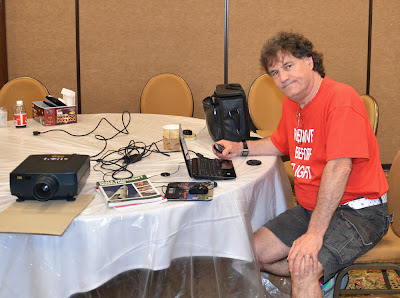 Mat Irvine (above) preparing one of his talks during the SciFi University session (below). 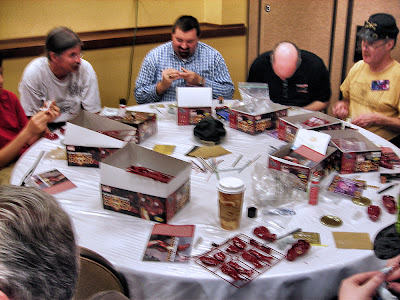 SciFi University
I’ve attended many UK science-fiction conventions and also a number of model shows in both the UK and US, but WonderFest is a unique mix of both convention and model show. I arrived for the Friday session, which featured the SciFi University (above), a joint venture by CultTVMan and Federation Models, the latter run by Tracy Brownfield. 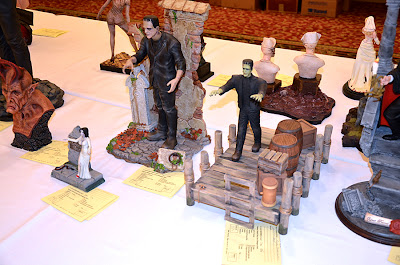 Skills improvement
For this, around 30 keen modellers wanted to expand their skills, and so with a number of Iron Man kits - donated by Moebius Models - the morning and afternoon were spent painting the parts, then fitting LED lighting supplied by Paul Bodensiek of ParaGrafix. I and a few others, including Jim James, an ex-pat living in Florida, made our way round, talking with the builders, making the odd suggestion and generally putting in our two pence worth - though, given the location, I should say “two cents worth…” 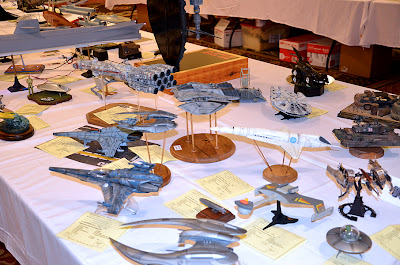 Wait here please
The main events started on the Saturday with dealer rooms being the initial focus for attendees, who patiently stood in line down the corridor - until the doors were opened, when the rush started! 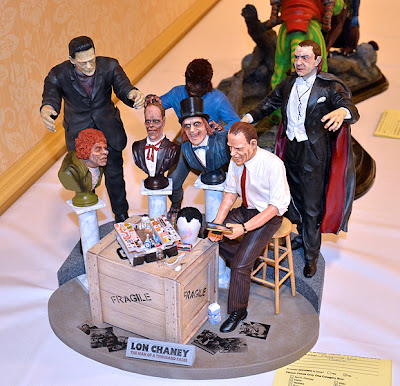 Meeting a mastermind
Dealers and displays, of which there were almost 100, covered the whole range of WonderFest interests, so we are talking science-fiction, fantasy and horror, with many figures, but a good smattering of craft and other models appeared as well. I met up again with George Stephenson, after many years. George was the mastermind behind GEOmetric, though that was some time ago, and I hadn’t seen George for well over a decade. He’s now creating 1:1 scale figure heads for his company BlackHeart. 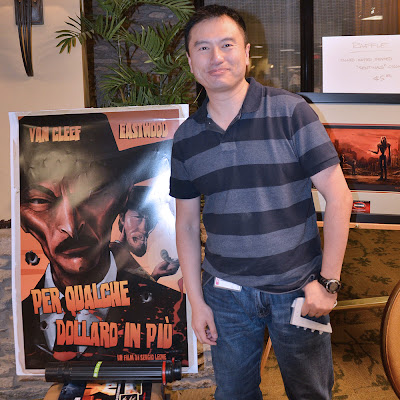 More faces
Fellow space modeller Jay Chladek was there, as was Rob Schmitt of Iwata Airbrushes, Larry Thompson of Pegasus Hobbies, and Frank Winspur and Dave Metzner of Moebius Models. Jamie Hood of Round 2 was showing the company’s latest - and one of the largest - creations, the 1:350 scale original Star Trek USS Enterprise. Another guest I was pleased to meet was Eric Chu (above), who had worked on designs for the new series of Battlestar Galactica. 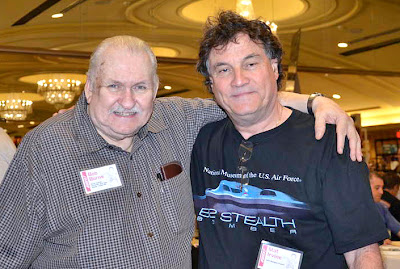 Original Ghost Buster
A special guest was Bob Burns (above left) who besides having taken over, to a certain extent, the mantle of the late Forrest J. Ackerman, with his collection of movie memorabilia, was also an actor in his own right. However, for one of his premier roles, he spent the whole time inside a gorilla suit, playing ‘Tracy’ from ‘The Ghost Busters’. And here, yes, the style of wording is correct, as we are talking about the original TV series, not the better-known movies. If you can locate a DVD of the show, its blend of absolute chaos is not to be missed - rather like The Three Stooges colliding with The Goodies, with a bits of Scooby-Doo and Rentaghost thrown in for good measure!

People at WonderFest
The photos here concentrate on the people at WonderFest. Future articles will cover dealer stands, the model competition, and some of the other ‘interesting events’ over a very full weekend. I thought the event was excellent - if you get the chance to go, go! 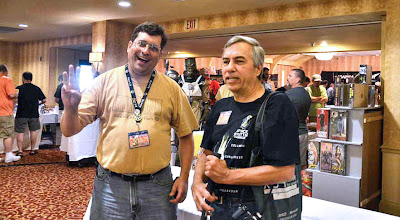 Space modeller, Jay Chladek (left) with Bob Koenn. Bob worked on all the Shuttle missions, mainly inspecting the Orbiters when they returned from space. 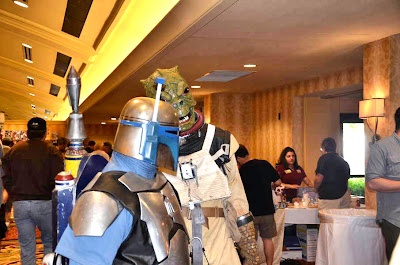 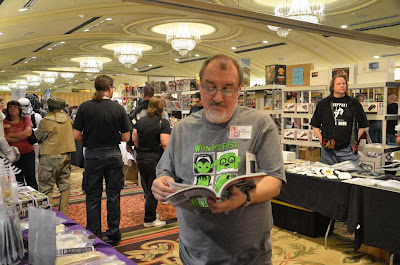 One of the Show’s organisers, Lee Staton, glances through one of Mat’s books. Lee was the mastermind behind Icarus Models, though that was quite a few years ago. 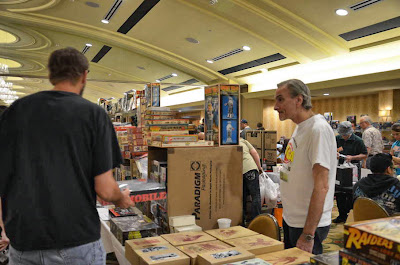 Rick Delfavero, (right) of MegaHobbies was present. His business partner Pete Vetri was also there, though he managed not to be in this photo! 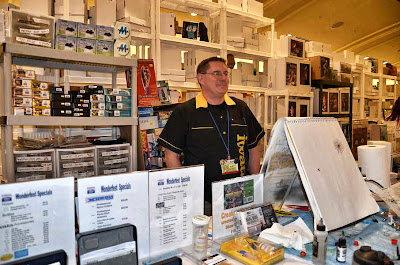 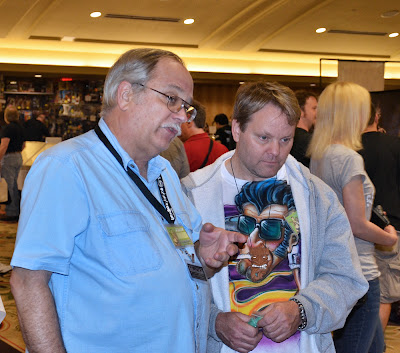 Dave Metzner of Moebius Models (left) with Jimmy Flintstone - of his own ‘Productions’. 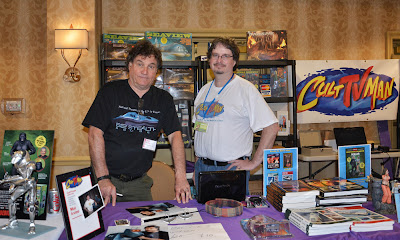 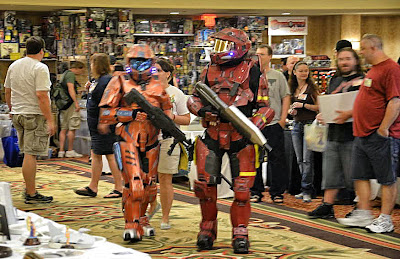 More visitors from another planet… 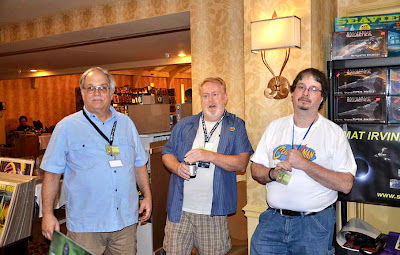 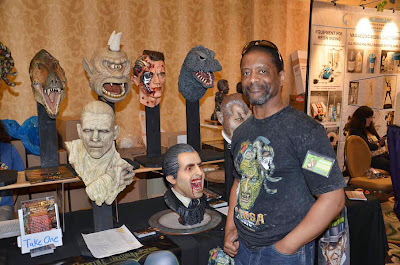 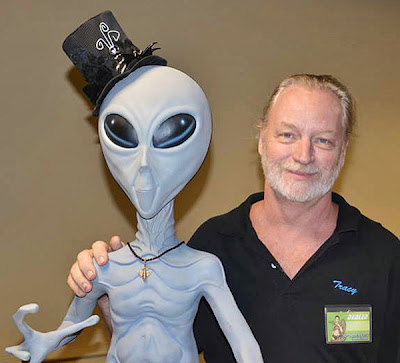 Tracy Brownfield of Federation Models and friend. Er, Tracy’s on the right.