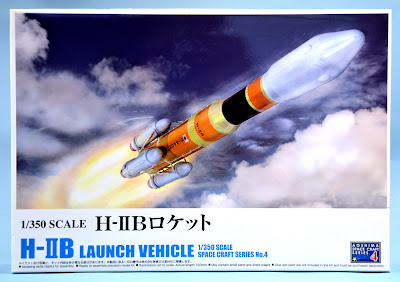 ROCKET REVIEW BY MAT IRVINE
Give that the H-IIB launch rocket is the mainstay of Japan’s satellite launch industry it’s somewhat surprising that there has been no kit of it before - this kit from Aoshima is a first. 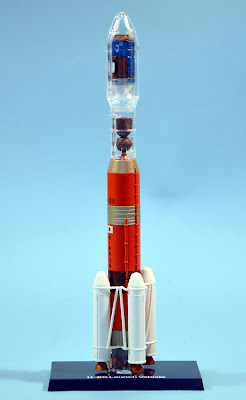 Small scale
The H-IIB is number four in the Aoshima ‘Space Craft Series’, and is produced in a small 1:350 scale. Even so, the kit still makes up into a comprehensive model with several interesting features. The pic above shows H-IIB with clear sections. Inside these are the rocket stage and H-II Transfer Vehicle (HTV). 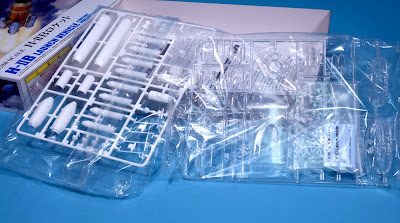 Clear and white runners, as supplied in bags. Note the small decal sheet in the clear bag on the right. Only two components - the third stage and payload shroud - are moulded in both white and clear plastic. 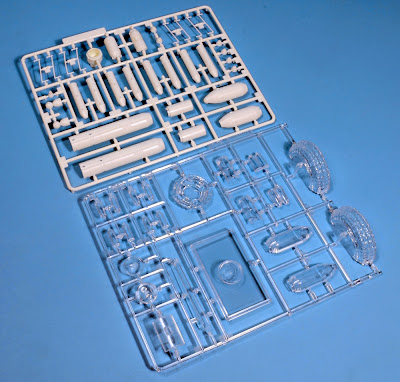 What’s in the box?
You get two runners, one in white styrene with 34 parts, the other in clear with 22, and you can build up the rocket to be displayed in four ways. The H-IIB is not a difficult kit to build, and it’s likely you’ll have more difficulty deciding which way it will be displayed than actually building it. 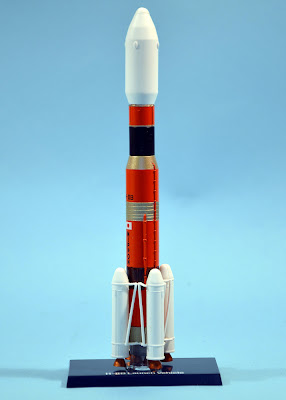 Paint choices
However, the paint scheme is slightly more taxing. Aoshima recommends Gunze Sangyo paint, which although available in the West, are less common than Humbrol, Testors, Revell-Germany, or even Aoshima’s Japanese stablemate, Tamiya. Because of this some compromises were made, and in the end I used colours from the Testors range, including Competition Orange and Metallic Platinum. Humbrol was used for Satin Black.

The box side panel (below) shows some of the display options. 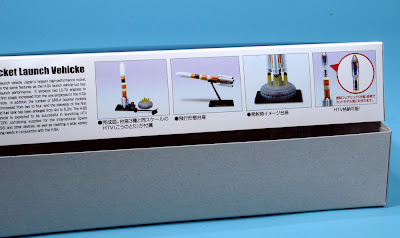 Multi-finish launcher
The rocket is finished in mainly white, orange and gold, though two other shades are needed - black, and a dark coppery-orange. This affects mostly the main rocket structure, while the four strap-on boosters are fortunately plain white - it’s easiest to leave these off and paint them separately. The H-IIB’s third stage and payload components are supplied in clear plastic as well as white, so you can build these up without paint.

Another display option (below) holds the rocket at an angle, traditionally the sort of attitude you see used for model aircraft stands. 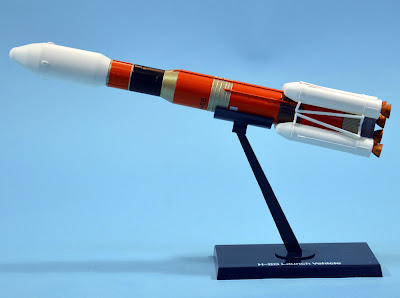 H-II Transfer Vehicle
The clear parts can then take the HTV, used Japan’s JAXA Space Agency to resupply the International Space Station. The illustrations also indicate that the HTV and its orbital rocket stage can be displayed separately - so maybe making for a fifth option! 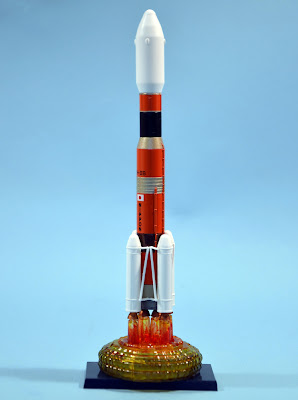 Exhaust flame stand
So the Aoshima H-IIB model can be displayed in three basic ways, plus variations.  It can be set on the supplied base, standing vertically. Or it can be mounted on the additional stand that displays the rocket at approximately 10 percent from the horizontal. And  thirdly, and perhaps the most interestingly, the H-IIB can be displayed atop a simulated lift-off rocket blast exhaust liftoff (above), and this option is built up from many of the supplied clear parts. These obviously need colouring with suitable ‘rocket exhaust’ effects, and clear paints are the best here, with both Humbrol and Tamiya making examples in their respective tinlets and bottles. Some colours are also available in Testors clear ranges, including aerosols.

Bigger kit please
In all, this is an intriguing model, and my only comment really is that it’s a pity that Aoshima couldn’t have made the kit bigger - it measures just 160 mm (6.25 in) long. It would be so impressive in the far more common 1:144 space launcher scale.