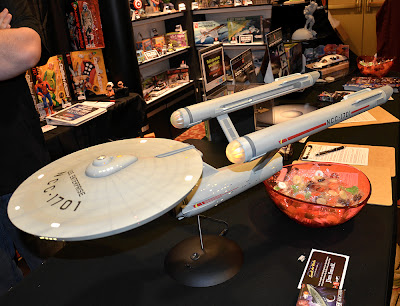 REPORT BY MAT IRVINE:
Here I continue my review of the 2012 WonderFest science-fiction and fantasy show, held at the end of May in Louisville, Kentucky - and take a close look at the test shot (above) of the huge 1:350 scale USS Enterprise due for release soon. 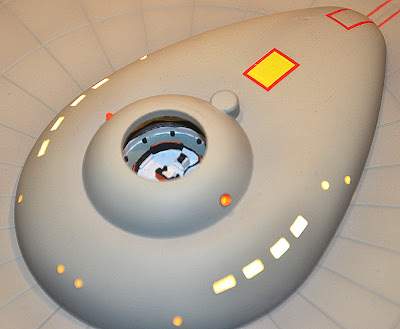 The large scale means that the bridge of the Enterprise is clearly visible (above).
Main runners (below) for the kit. 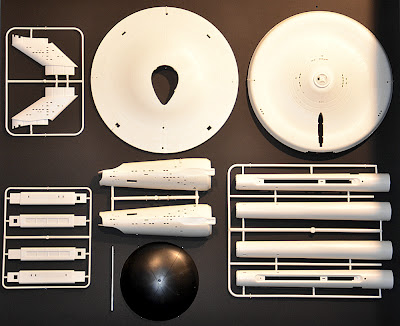 Mighty starship
Jamie Hood of Round-2 showed off the upcoming Star Trek USS Enterprise. This is the original version from the first series, and ‘the best’ as Scotty might maintain, “No bloody A, B C, or D…” The kit is made to a massive 1:350 scale, and stretches some 813 mm (32 in) long. Five moulding colours are involved: two shades of grey and three transparent tints. The Enterprise will be sold under the Polar Lights name, and should be available in October.

You even get a tiny Galileo shuttlecraft, seen below next to a business card. 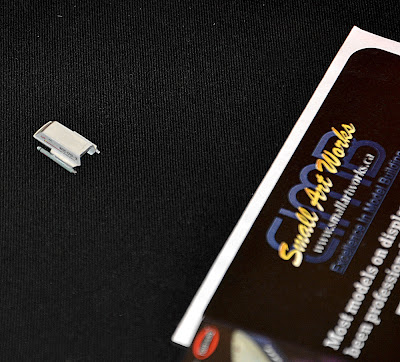 Munsters at home
Frank Winspur and Dave Metzner of Moebius Models had test shots of several of new kits, such as the Bride of Frankenstein, the Cylon from BattleStar Galactica, and an HO (1:87 scale) model of 1313 Mockingbird Lane (below) perhaps better known as the home of The Munsters! 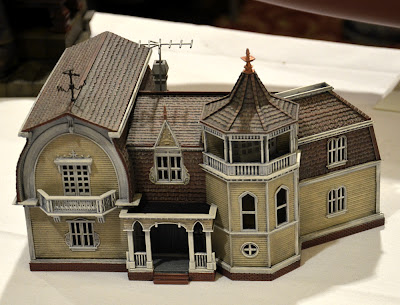 Dressed-up ladies
Jimmy Flintstone’s kits range from car bodies to human bodies, mostly of the female kind, and the items he bought to WonderFest tended to lean towards the latter. However, some are, shall we say, for the more discerning and open-minded modelmaker. So, because WonderFest was a family show, some of the ladies had to be ‘dressed’ for the occasion. Jimmy is seen (below) peering from under his Rat Fink sign. 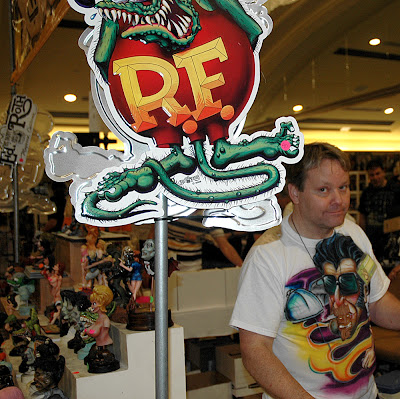 Full-size heads
Some dealers had full-size objects on show, usually just the heads of famous science-fiction, fantasy and horror characters, as full bodies would be a tad impractical. Dale Morton displayed an excellent range of fantasy heads, while the ex-GEOmetric George Stephenson also deals with full-size horror and fantasy heads, these marketed under his BlackHeart company name. 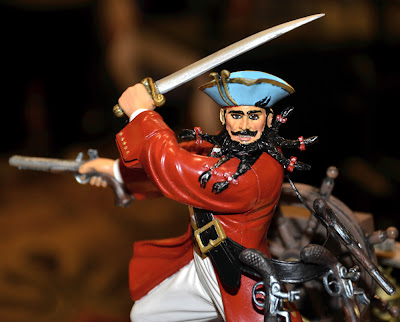 Popular pirates
Pete Vetri and Rick Delfavero of Atlantis Models, part of Mega-Hobbies based in Long Island, NY, were at the show. Atlantis Models has already reissued some classic Aurora kits, both from the original moulds and re-tooling. One new one shown at WonderFest was Blackbeard the Pirate (above). With Sinbad featuring in a new TV series, and Pirates of the Caribbean still being so popular, ‘pirates’ are obviously the new ‘aliens’, ‘dinosaurs’, ‘Star Wars characters’ or whatever you reckon the last popular phase was! 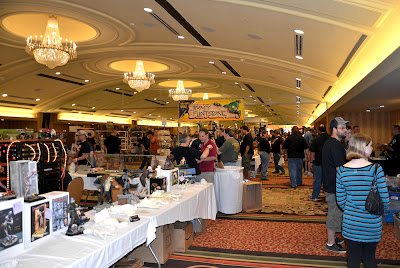 General view of the main dealer room at WonderFest 2012. 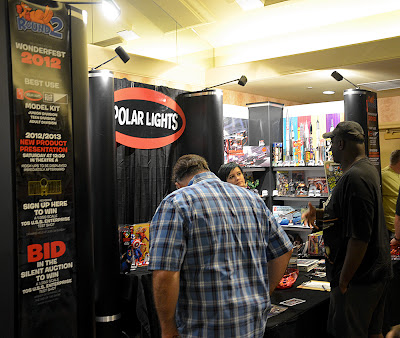 The Round-2 stand, primarily Polar Lights, but also including AMT and MPC. 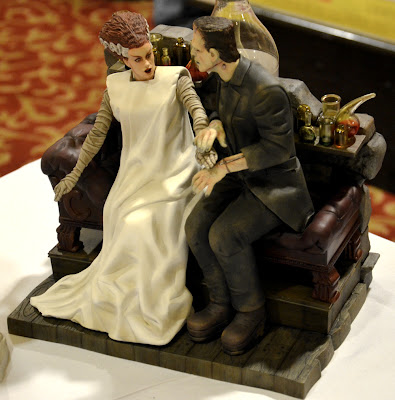 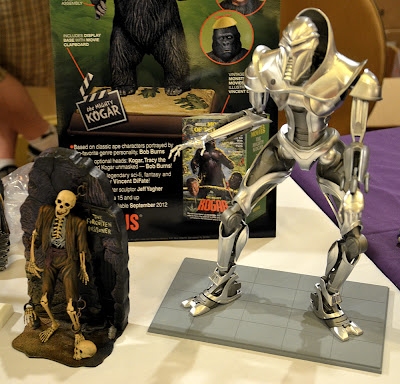 Moebius reproduction of the Aurora Forgotten Prisoner at left, Cylon at right. 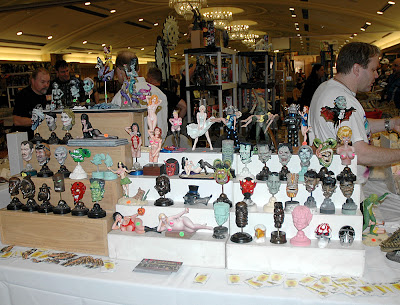 Part of Jimmy Flintstone’s display showed a mix of science-fiction, fantasy and horror figure busts, and ladies that were mainly busts. 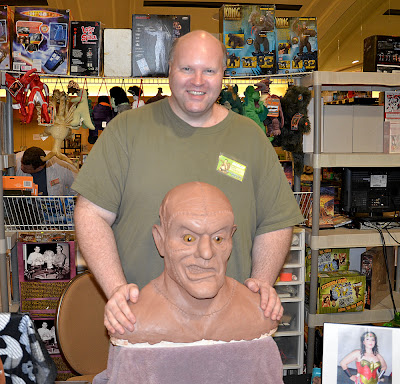 Dale Morton of Dale Morton Studios, sharing the limelight with one of his creations. 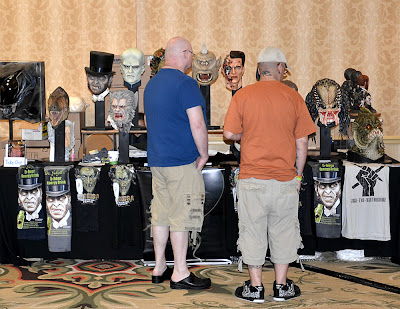 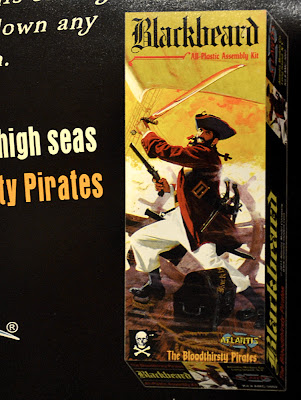 The Atlantis Models reissue of Aurora’s Blackbeard the Pirate. 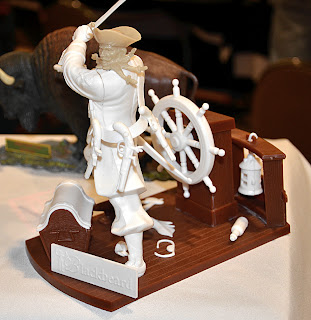 Unpainted test shot of Blackbeard. Do you think there's a resemblance to another pirate, maybe a certain Captain Jack Sparrow? Well, that answer’s up to you... 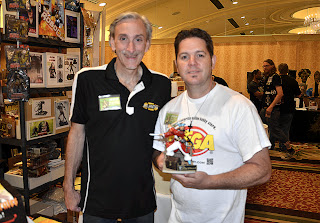 Rick and Pete of MegaHobbies/Atlantis, with the Blackbeard (or Jack?) figure.