BACK TO FUTURES PAST WITH THE AMTRONIC - A 1:25 SCALE LEVITATING VEHICLE FROM THE 21st CENTURY 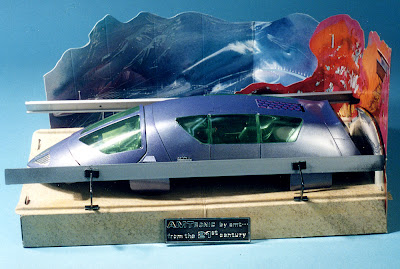 MAT IRVINE REPORTS:
The ‘futuristic’ title may now seem slightly dated, as we are after all now living in the 21st Century, but when this model - the 1:25 scale AMTronic futurecar - was first issued, there were still 30 years or so to go before we hit the then-fabled ‘Year 2000.’ 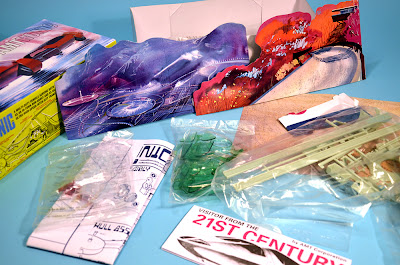 What you get - card diorama in the background, three large parts, one small, the sets of bagged components, and manuals.

Future cars
The idea of show cars that depict ‘futuristic’ styles of what we might be driving a few years hence are common with full-size car companies, but the AMTronic was somewhat different in that it was a model company’s own vision. A product of, perhaps not too surprisingly, AMT, the AMTronic was intended to be a serious study for a futuristic mode of transport.

Box panels (above) reveal useful information, while new details are printed on the bottom (below). 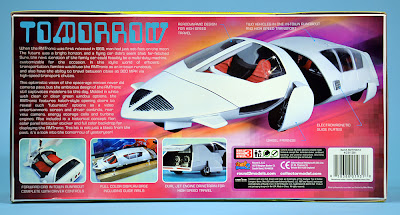 Combo vehicle
The AMTronic’s design was a combination of two vehicles - an intercity transporter and a two-seater city car that could detach from the nose, for travel around town. Power was to be from fuel cells, augmented by solar energy, while the tyres were specially designed by Goodyear. As envisaged, the AMTronic could convert to ‘hover’ mode - actually, electromagnetic levitation - when on suitably-equipped highways, retracting its wheels like an aircraft. In this hover mode, a driver could relax with the passengers, while being propelled smoothly along at some 480 km/h (300mph). 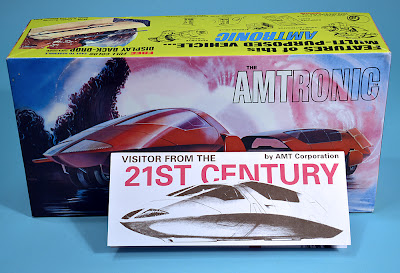 The new box (above and bottom) compared with an original from 1969. Apart from the old box having faded a bit, and the new one looking slightly ‘electronic’ (due to digital processes), they are identical. 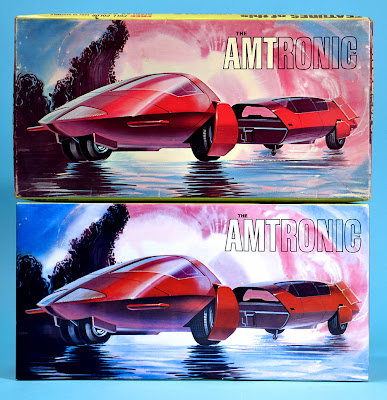 Complex model
AMT designed an extremely complex kit to reflect this futuristic scenario, and for display, a colourful card diorama backdrop was provided. This was a feature found in many AMT kits of the period, in this case depicting a section of ‘levitation highway’, with a futuristic city in the background. The kit was first issued in 1969, the year of Apollo 11, but that was the only issue until 2000. And then, much to the chagrin of many modellers, the millennium reissue lacked the card diorama. 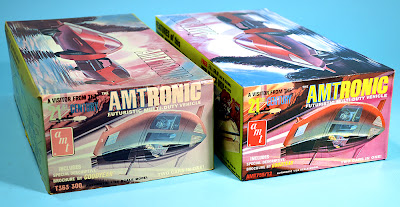 End panels of the boxes, old (left) and new. The only difference is at the bottom left-hand corner of each panel, where the kit numbers have changed.

All included this time
But time has moved on, and now the kit has been reissued again, this time in all its original glory - you get all the plastic parts, and the card diorama as well. Around 100 light green parts make up the model, plus 20 or so in a mix of clear and red for the tail lights. Actually, in common with many recent AMT and MPC reissues, you get the clear parts twice, the second set here moulded in a transparent light green, the tint used for many kits from 1969. The AMTronic measures an impressive 270 mm (10.5 in) long when assembled and looks even better when displayed on the large three-part, full-colour card backing, mounted between the leva-highway guide rails. 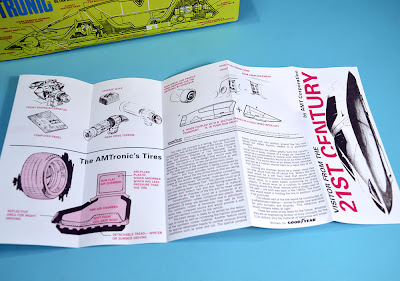 The explanatory leaflet is reproduced this time around. Note the different engines, which are included in the kit. 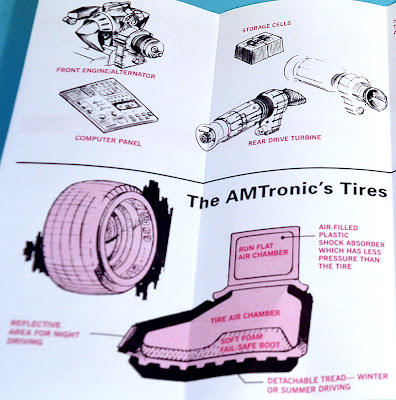 Bonus included
The model originally came with a bonus fold-out booklet that explained the novel features of the AMTronic. Many reissued kits omit this type of detail, but this one, besides accurately reproducing the original box and plans, also includes a faithful copy of this booklet.

Thanks to Round 2 Models for the review kit.

Plenty of AMT kits to look at here. 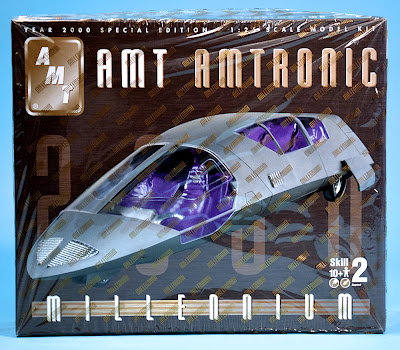