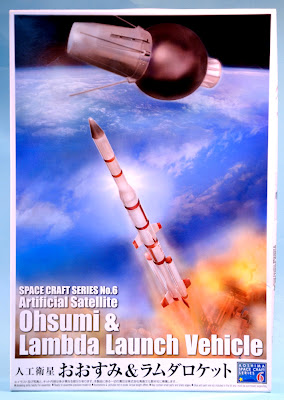 REPORT: MAT IRVINE
Following Aoshima’s 1:350 scale H-IIB launch vehicle, the company has come up with another Japanese launcher, the four-stage Lambda L-4S. This fired Japan’s first satellite into orbit in 1970, the Ohsumi 5, making Japan the fifth country to launch its own satellite with its own rocket. 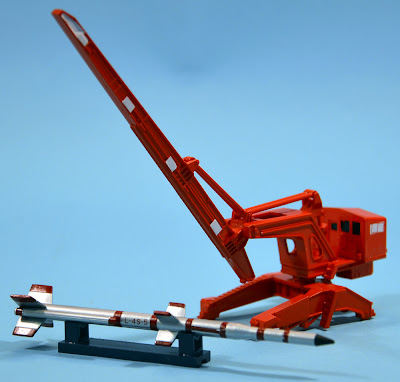 Small rocket
Lambda was a relatively small rocket, so Aoshima has made this kit to 1:150 scale, much larger than the H-IIB’s 1:350. Similarly, the L-4S is slightly irritating, as 1:150 isn’t an established scale, though it could be argued that it's close enough to the main launcher scale of 1:144 to be displayed alongside those models for comparison. 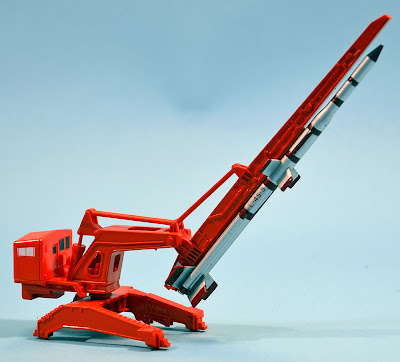 Launch system
Besides the L-4S rocket, you get the launch system (above), itself very ‘sounding rocket’ in style. To this end, the rocket hangs under the launch rail, and Aoshima has come up with a unique way of attachment - a set of magnets. 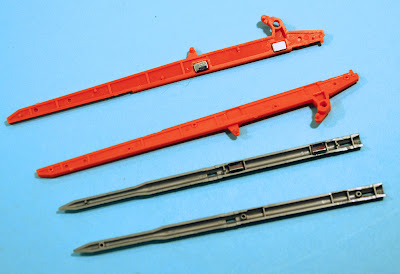 Supplied in the box are four small (likely rare-earth) magnets, which you have to sort out so you have two pairs that attract. Then you mark up the attraction faces, separate the pairs out, and fit one set to the rocket body, the other to the launch rail - easier than it sounds when you have the magnets in front of you! The magnets fit in the launch rail (red above) and rocket (silver). They are clearest seen against the red launch rail, but are just visible in the upper of the rocket halves. 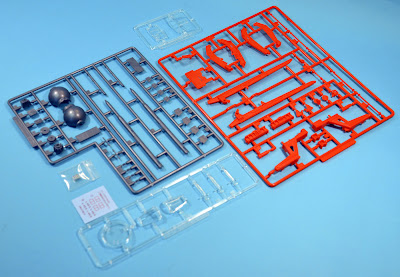 Component count
You get 61 styrene parts and a small decal sheet, plus magnets, wire and polythene sleeves that allow the launcher to swivel. The main components are moulded in their correct colours – red for the launch pad, silver for the rocket. Clear parts are included for the Ohsumi cover and stand, and the launch pad cabin. However, the latter is really irrelevant as the small windows can be painted back, or you can use black decal stock. 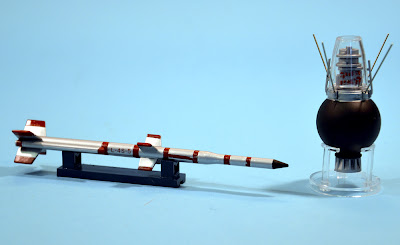 Marking scheme
Unlike most US launchers, Japan tends to go for more interesting colour schemes, and Lambda is no exception. It’s basically silver, with seven brick-red bands circling the rocket, four more stripes painted vertically. I found it easiest to paint the whole rocket red first, then mask off the appropriate stripes, and overspray all in silver. The tip is painted silver on the box-art, but in reality it should be black.

Above, the Lambda L-4S launch rocket is shown next to its Ohsumi 5 research satellite payload, the latter, needless to say, in the much larger 1:20 scale! Cradles for the rocket are included, but I added the base connecting them. 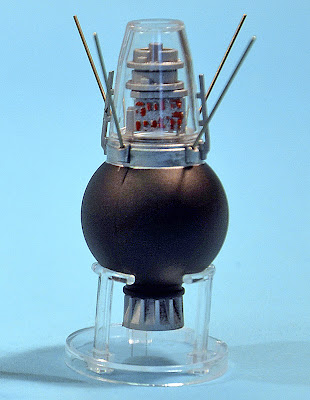 Ohsumi 5 satellite
The Ohsumi 5 satellite is has a clear section to show the instrumentation, and sensibly uses supplied thin wire for the antennas. Add a coupe of nameplates, in Japanese and English, and a couple of supports for the Lambda if you don’t want it attached to the launcher, and the result is another of Aohima’s excellent new range of uncrewed spacecraft. 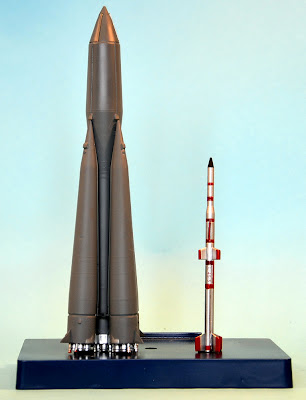 Scale please!
Above, the 1:150 scale Lambda L-4S is shown compared to the nearby-scale 1:144 scale Sputnik 1 launcher of October 1957. This modified ICBM has been converted from the Airfix kit, and the pair sit on an Airfix generic rocket base.

But again, my plea is that Aoshima tries to establish some set scales for these models. Yes, we know it is difficult to show ‘launcher’ and ‘payload’ in the same scale, but some scales are now so well established. Besides the almost universally accepted 1:144 for launchers, crewed craft tend to be in 1:72, 1:48, or even 1:24. Uncrewed spacecraft may also be in 1:24 scale, though admittedly Ohsumi 5 would be even smaller in 1:24, so there are always exceptions!

About the real thing
Japan followed the USSR, USA, China and France, while the UK became sixth in 1973 with Black Arrow and X3/Prospero. The Lambda was a solid-fuelled rocket, developing from the single-stage L-1 to this example with four stages, the L-4. The Lambda was unguided, due to restrictions at that time for Japan developing military-style guidance systems, and was closely related to sounding rockets such as the UK’s Skylark or US Aerobee series. But Lambda was specifically designed to launch a small satellite which it finally succeeded, after four failures, on February 11, 1970.