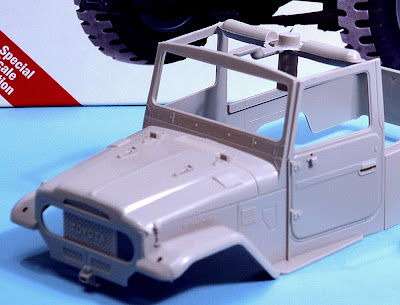 REPORT BY MAT IRVINE:
Italy’s home-grown model company, Italeri, is one of those still producing a wide variety of kits. However, as is so often the case in the world of takeovers, it has over the years acquired virtually all its rivals in the country, including Protar and ESCI. These have greatly increased Italeri’s own vehicle catalogue, especially those from ESCI, and has led to a new kit trio ‘of mixed parentage’.

Unique to ESCI
ESCI had made a number of vehicles that were not made by anyone else in 1:24/5 scale, such as the Mercedes-Benz G-Wagen, long wheelbase (LWB) Land Rover, and an early Toyota Land Cruiser four-wheel drive (4WD). In addition, ESCI made a series based on the Jeep CJ-7, though none were the classic CJ-2 military version, but this was one Italeri itself had made. 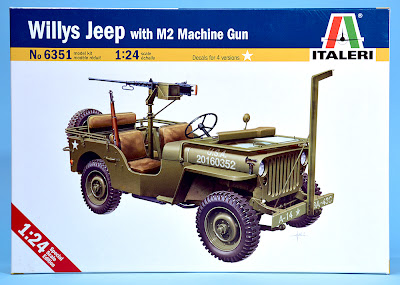 Extra parts
Consequently, Italeri has issued three military soft-skinned vehicles from around the globe using both its own and ESCI tooling. These are a reissue of an Italeri original, the Willys Jeep, now supplied with an extra runner for a mounted M2 machine gun and associated paraphernalia. 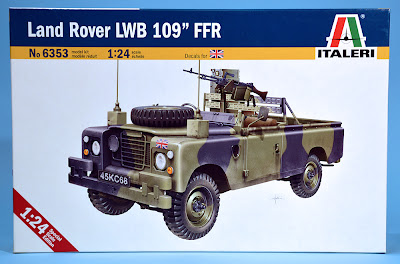 Land Rover
Next comes the Land Rover. ESCI originally did four versions of the LWB Land Rover. The civilian version was reviewed in Scale Model News but the company also made a military paratrooper-type version. This is now reissued ‘as is’ by Italeri, as it had already included the appropriate military equipment. 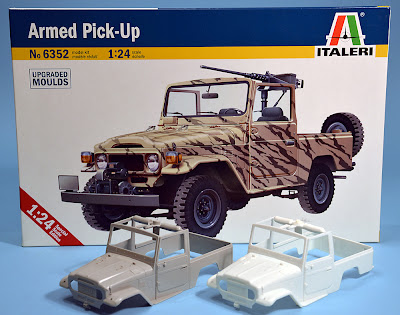 Toyota with new Armed Pick-Up body (in grey) and one from the ESCI Safari version (white). The Armed Pick-Up is actually an early Toyota Land Cruiser that started with ESCI.


The third release in this unofficial set of three is a combination kit, as it is based on the ESCI Toyota Land Cruiser. The basis is the ESCI kit, but Italeri has added a new runner for the machine gun. Though now it is called an ‘Armed Pick-Up’ and oddly, Toyota has not been credited.

Styrene or vinyl?
The three kits show the slightly different approach ESCI had, compared to Italeri, when it came to vehicles. The Italeri Jeep has engine detail and opening hood, but all-styrene tyres. These are in two halves but separate to the wheels, making painting easier. ESCI however tended not to include separate engines - just the sump/oil pan underneath - but did include standard vinyl tyres. All three however, do include full under-chassis detail and four-wheel drive set-ups. 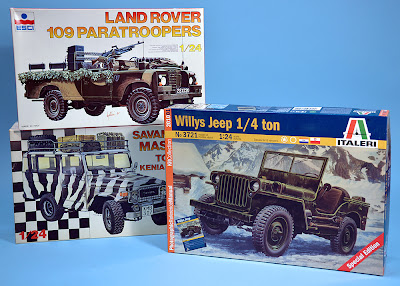 The original ‘raw materials’  (above), the ESCI Land Rover 109 Paratroopers (top left), and one of its Toyota releases (bottom left). The Safari version is shown, as ESCI didn’t do a military version. At right, the original Italeri Jeep.


Combat duties
With a continuing multitude of armed conflicts across the world, these types of vehicles are often pressed into skirmishes, and so the models are ideal for diorama possibilities. From my point of view, it is also nice to see such vehicles in 1:24/5 scale, instead of 1:35  ‘military scale.’ A few examples have appeared - MPC’s 1:25 Jeep, Hasegawa’s 1:24 Jeep and Kubelwagen, but it’s always nice to have more options. And if your views are more peaceful, well they can all be built ‘stock’, less the guns.

Change of names
Incidentally, Italeri has gone through three trading names in its lifetime. It started as ‘Aliplast’ in the early 1970s, but is only thought to have ever issued one kit under this name, as it soon moved on to ‘Italaerei’. Presumably this was thought to be too much of a tongue-twister, so the name was simplified to the current ‘Italeri’ by the 1980s.

Thanks to Italeri's UK importer and distributor The Hobby Company for the sample kits.