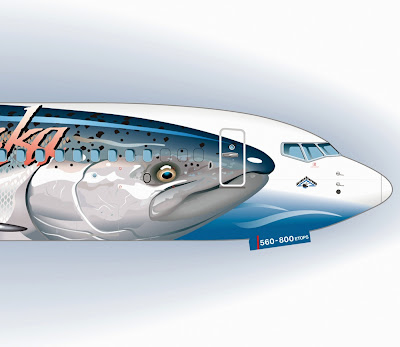 SMN REPORT
For lovers of exotic and complex markings, this one’s a winner, and ought to be the subject for a garage-kit decal job... please! Last week, a 41-tonne king salmon landed in Anchorage, Alaska, to a rousing welcome from crowds of workers with Alaska Airlines and the state seafood industry. 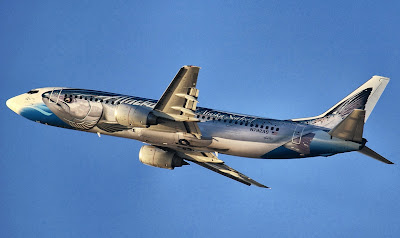 Actually of course, the ‘king salmon’ arrival was no overweight flying fish, but a newly-decorated Boeing 737-800 (above), now surely a contender for displaying the world’s most intricate commercial aircraft livery. The scheme celebrates the partnership of Alaska Airlines and the Alaska Seafood Marketing Institute, both organizations eager to promote the delights of the largest US state and its produce.

Bigger aircraft
The ‘Salmon-Thirty-Salmon II’ design is similar to the 2005 paint scheme that flew on a 737-400, an aircraft repainted with Alaska’s standard Eskimo livery in 2011. The new king salmon is longer than the earlier one, as the -800 is a bigger plane, and also features uptilted winglets, which are covered with fish scales.

Background
The design was produced by Seattle-based Mark Boyle, a talented wildlife artist, and no stranger to the task of creating one-offs for Alaska Airlines - he’s completed a dozen or so others. A camera-friendly flying billboard like this is a big promotional bonus for the airline, which is a major airfreighter of fresh produce - in 2011 alone, nearly 11,000 tonnes of seafood were carried to markets in the US, Canada and Mexico. 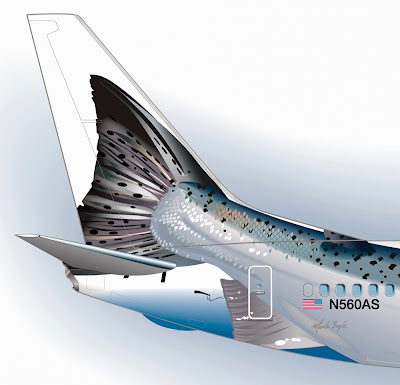 Summation
A beautifully executed scheme that updates the original Salmon-Thirty-Salmon-I nicely. Come on decal-makers: let’s have a set soon. Or perhaps better still, STS II could make a mean challenge for modelmakers to come up with an impressive hand-painted original.