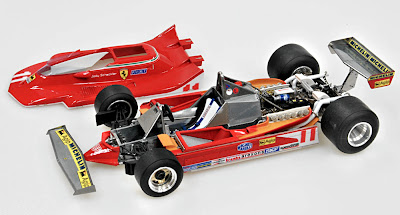 SMN REPORT
Automotive model fans prepare to open your wallets for this 1:20 scale 1979 Ferrari 312T4. Produced by the excellent Japanese Model Factory Hiro, and due in December, the kit is proclaimed as ‘a hybrid injection’ kit. MFH reckons this is a new term to cover the massively multimedia nature of the production, containing components produced in white metal, photo-etch, spun-aluminium, and plastic injection. Sounds great to us, and as the pictures show, the results ought to be spectacular in the hands of a reasonably skilled model maker. 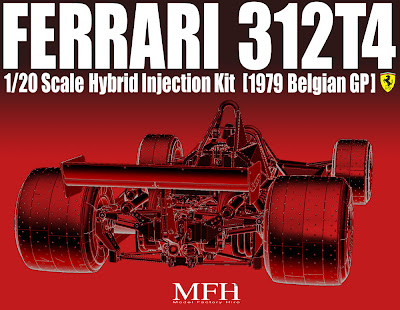 What’s in the box?
* The kit will have parts for 1979’s Belgian Grand Prix, when Scheckter clinched the championship, plus alternative parts to show the car as it raced in the Spanish, German and Austrian GPs.
* The body cowling and other outer parts are plastic, the main inner parts of white metal. * Monocoque parts are die-cast aluminium - MFH says. “Just brush it and you can have the feel of real metal.”
* Intakes, exhaust end and wheels centres are made of aluminium alloy. Wheel rim and safety bolt are white metal, to be attached to the wheel. 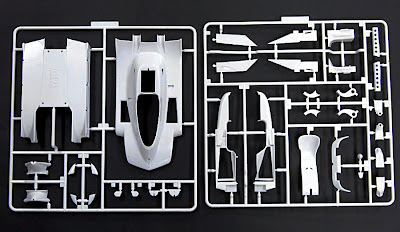 * Metal mesh, for intakes, muffler spring, cords, pipes, seat belts are included.
* Cowl and side pontoons are removable, so that internal parts such as the Ferrari V12 engine can be seen. A neat touch - the body is attached by magnets for easy removal.
* Transparent blue-tinted windshield, provided in vacuum-formed plastic 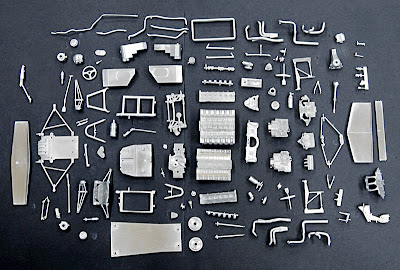 About the Ferrari 312T4
The car dates back to 1979, when Ferrari introduced it to compete with the successful Lotus 79, making the 312T4 the first Ferrari ground-effect design. With a V-12 for power, the 312T4 first competed at the 1079 South African Grand Prix, where it was a huge success, scoring a 1-2 win with Gilles Villeneuve taking the podium, Jody Scheckter coming in second on his home turf. 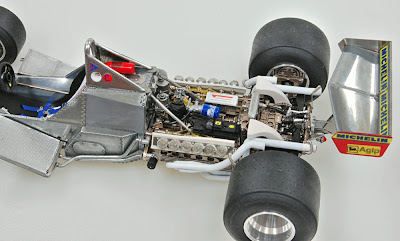 Big win
That result was quite an achievement for the 312T4, and the first Formula One 1-2 debut since the legendary Mercedes-Benz W196 of 1954. The 1979 season ended in barnstorming style, with the Italians taking the Constructor Championship, and Jody Scheckter winning the Driver Championship, a double-top not repeated for another 21 years, in 2000. 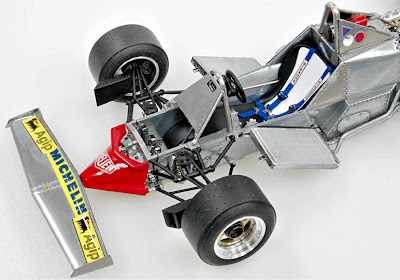 Driver absent
Note that MFH has not included a driver figure, so you’ll have to go elsewhere for a miniature Jody Scheckter. We can find the Top Model one, though it’s moulded to the slightly larger 1:18 scale. Maybe buy that and fit Jody with platform heels... 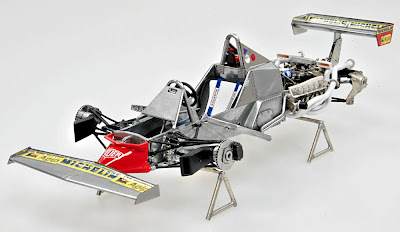 Summation
Pictures here are provided courtesy Model Factory Hiro and are of test-shot assemblies, so minor changes and improvements can be expected. However, from the obvious quality seen here, the car looks like a must-have. As for price, the UK retail £137.95 GBP ($220 USD) seems fair value, bearing in mind the sheer quality and close attention to detail.

The Model Factory Hiro Ferrari 312T4 will be available from selected outlets, including the UK-based Hiroboy, not so far from SMN Towers.

We found a 1:18 scale Jody Scheckter figure on eBay here. 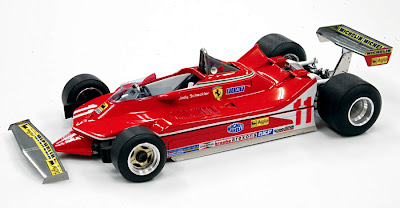 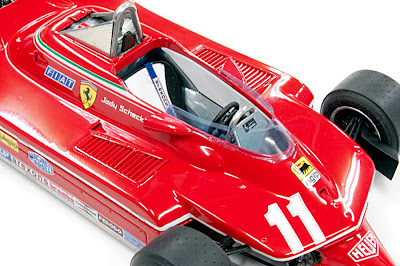 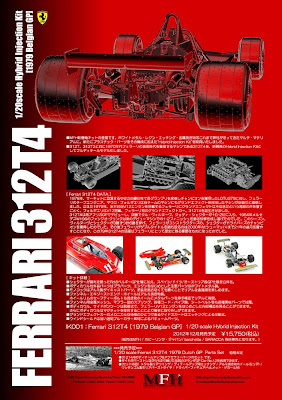