MORE APOLLO 11 SPACECRAFT KITS FROM DRAGON - AND THIS TIME THEY’RE IN BIG 1:48 SCALE 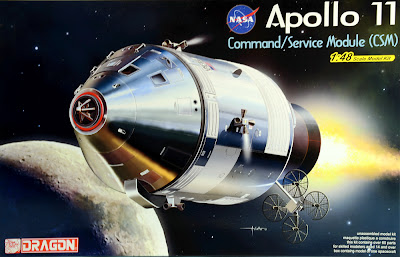 Dragon of Hong Kong has added a pair of 1:48 scale Apollo 11 kits to its excellent - and expanding - range of real-space models. Both kits are enlarged versions of previous spacecraft made to 1:72 scale. 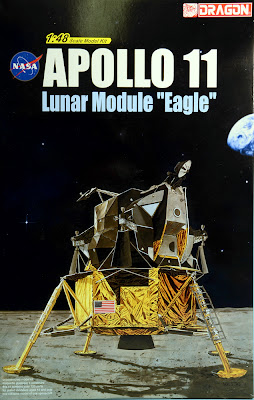 These big-scale spacecraft models are more or less straightforward enlargements of the 1:72 scale originals, so any comments on the smaller versions also apply here, but a bit larger! It also means that slight faults apparent in the smaller kits are somewhat enlarged here, but they still look the part.

One kit into two
Unlike the 1:72 kit, in which you got all the Apollo 11 modules - Command (CM), Service (SM) and Lunar (LM) - in a single box, here they have been split into two separate items, so one kit contains the Command and Service Modules (CSM), the other the Lunar Module. 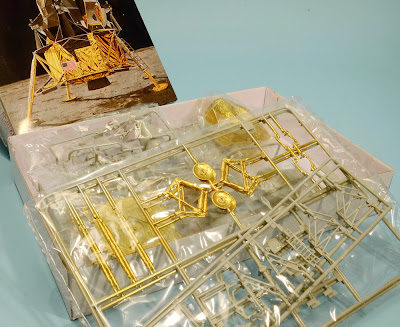 
Slight changes
The CSM kit follows its smaller 1:72 scale counterpart closely, but some mods appear to have been done to improve construction. The Reaction Control System (RCS) or ‘quads’ - are now split north-south, as well as having separate east-west nozzles, and the top bulkhead now has holes drilled through. The four High Gain Antenna (HGA) dishes are still made in metal, as this is the only material in which they can be produced thinly enough. 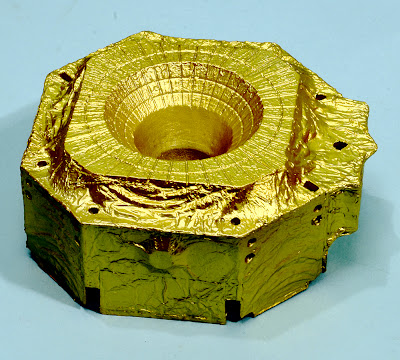 
Engine bell needs work
The engine bell still has the incorrect two rings present, the simplest remedy being to sand off the lower one. The upper ring is still not quite in the right place, but short of a complete scratch-build, it will have to be near enough.

Plus point for the big kit
The Lunar Module has one rather interesting feature not found on the 1:72 scale version. The smaller kit included a ‘first’ for any LM model in that the crinkled foil covering various sections (the Descent Stage especially) was moulded into the plastic, so all you had to do was paint the gold and black colours. The 1:48 scale kit goes one small step further, in that the moulded crinkled effect is still there AND it has been pre-painted by Dragon in the correct aluminized gold finish. 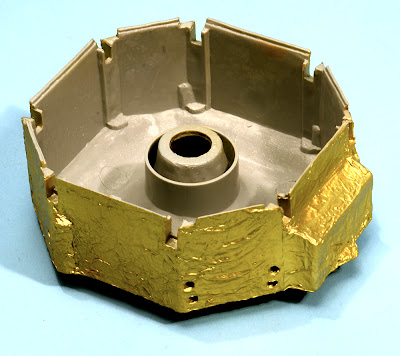 Descent stage interior, showing that the gold is sprayed over the external grey plastic - it is not the moulding colour.

The hardcopy magazine Airfix Model World, issue 23, features a detailed article about my buildup of the 1:72 scale Dragon Apollo 11 kit.