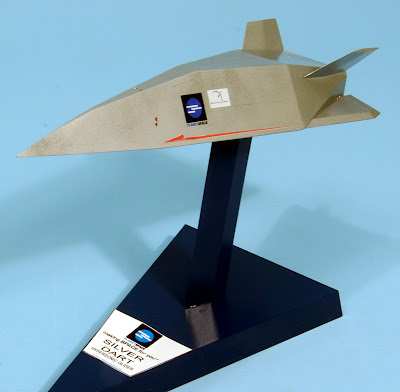 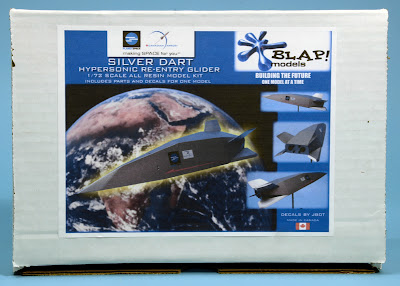 The primary role of Blap! is in specialist one-off moulding and mould-making tasks for other companies, mostly involving resin. However, Dave also has a sideline producing model kits, of which the 1:72 scale Silver Dart is one. 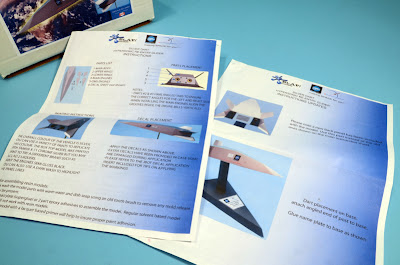 Easy assembly
The Silver Dart kit is simple in construction: you get a baker's-dozen components including the sturdy base, but the box does also contain sheet of decals. These are rather fragile, so once applied, you will need to protect them with several coats of Testors satin varnish. 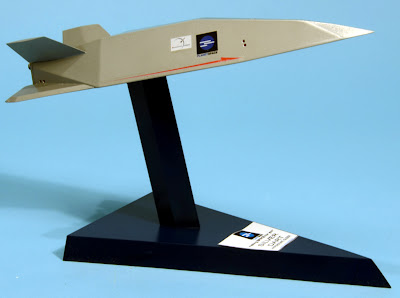 Metallic finish
The assembled model measures some 150 mm (6 in) long, though the big base adds to the perceived size on a display shelf. If the real thing goes all the way to production, it will have an all-metal surface finish, so painting the kit a dark aluminium is easy enough, with none of the complication of painting thermal-tile patterns, necessary with a Space Shuttle kit.

Summation
A neat kit and we agree with the Modelling Madness review that reckons it’s a good introduction to resin modelling.

Other kits from Blap!
Blap! Models also makes kits of the original FDL-7, the HL-20, plus the Canadian Arrow suborbital rocket, forerunner to Silver Dart. For aero-specialists, there’s a conversion kit for a flaps-down US Navy F-8E Crusader wing, designed for the Hasegawa 1:48 scale model. 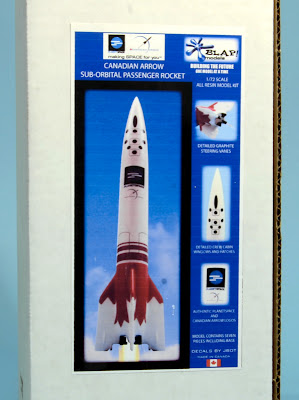 Silver Dart background
Mention ‘space tourism’ and the first names that spring to mind are Burt Rutan, SpaceShipOne, SpaceShipTwo, and Richard Branson’s Virgin Galactic. But there are other players in the game, one of them being PlanetSpace, which is developing the Silver Dart.

Ansari X-Prize
Named for the first aircraft flown from Canadian soil in 1909, today’s Silver Dart is a potential contender as a space tourism contender. It originated with the Canadian Arrow company of London, Ontario, which was a contender for the Ansari X-Prize of the early 2000s. Of course, Burt Rutan’s design won the prize in 2004, but some members of Canadian Arrow’s management team went on to form today's Chicago-based PlanetSpace.

Design story
Silver Dart is based on the US Air Force FDL-7 hypersonic glider, which itself dates back as far as the 1950s. However, the version now being developed is intended to be extremely versatile, with mission profiles that could be crewed or not, and be used as a supply vessel for the ISS, or as a tourist spaceliner.

Thanks to Dave Guertin at Blap! Models for the review kits.