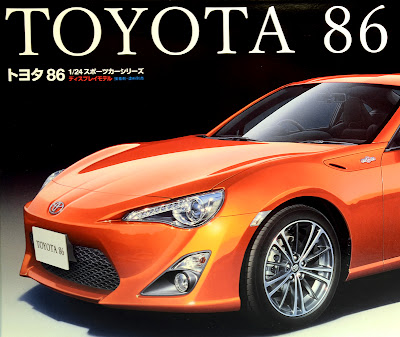 FIRST LOOK FROM MAT IRVINE
Here’s one for 1:24 scale enthusiasts from Tamiya, a sports car kit of the Toyota 86.


The real thing is a collaboration between Toyota and Subaru, who set out to develop a common sports car, designed with echoes of the 1980s in mind. The vehicle has the classic performance combination of front-engine/rear-drive, and uses a horizontally-opposed ‘boxer’ engine, a type used by Subaru which allows a low bonnet line. 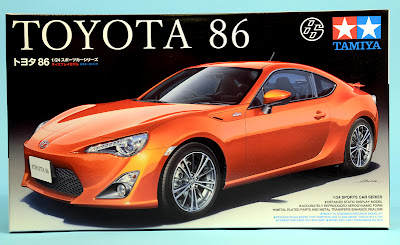 The name is...?
The Toyota is also called the GT86 or Scion FR-S, depending on where it is sold, but apart from badges and some trim details they are the same vehicle. The Subaru equivalent is less confusingly called the BRZ in all markets. 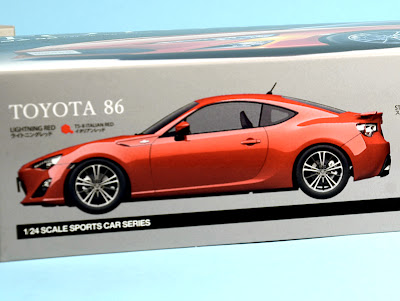 The Tamiya box side shows two other paint schemes, Lightning Red (above) and Sterling Silver metallic (below). 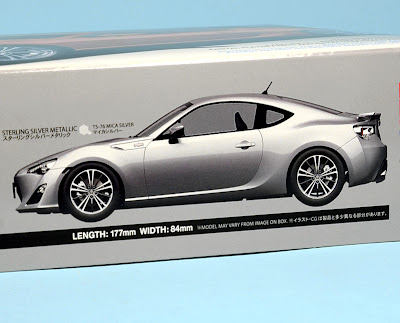 Engine detail
The Tamiya Toyota 86 kit features an engine, and although it is built on a solid chassis, the main engine block and details are visible through the opening bonnet. The interior has two separate bucket seats, and right-hand drive controls.

Coloured components
The kit is moulded in white and black, with clear and chrome-plated parts - 31 white, 41 black, 17 clear, 18 plated and four black vinyl tyres. Metallized decals depict badges and mirror glass. You also get masks for the window glass to allow fuss-free painting of the black surrounds, and there is even a short length of metal rod that acts as the bonnet strut. The assembled model measures around 170 mm (6.75 in) long.

The box-art illustrates the primary factory colour offered for the Toyota 86, a bright metallic orange, though notes for six other stock colours are also given in the instructions. 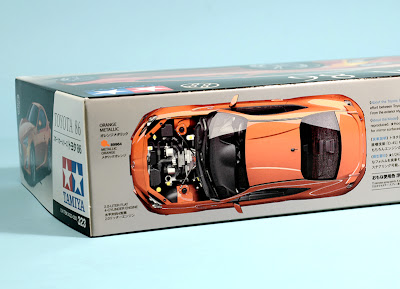 Summation
A neat kit that looks as if it will make a useful addition to a modern sports car collection.

*** Mat Irvine note: This is the first of my ‘First Look’ series, in which I plan to do quick takes on - especially - new kits. As they take time to build, after the taster many will go on to have a longer build-review at a later date. So hopefully, there’ll be more appearing on this particular kit in future.

*** Mr J note: I had the pleasure of a drive in the GT86 recently, and if I was in the market for a small sports model, it would definitely be high on the shortlist. The cockpit was nicely designed, with instruments and controls positioned ‘just so’. On the move, the little car felt so dainty, and the ride was very controlled over the dips and bends of undulating Cotswold roads and lanes. I wasn’t so keen on rear visibility though, particularly the three-quarter vision that’s so essential for making snappy parallel parking manoeuvres. Not that this is so unusual with current car design - many makers now supply rear-view cameras to make up for ergonomic deficiencies.


Thanks to The Hobby Company for the review kit