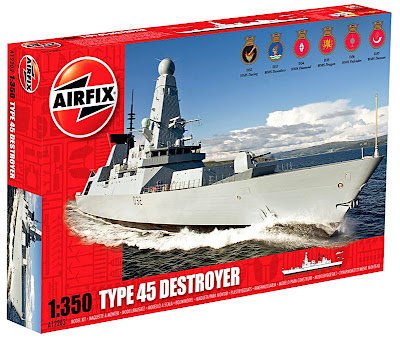 The kit has 203 components and decals for all six Type 45 ships: HMS Daring, Dauntless, Diamond, Dragon, Defender and Duncan.

Assembly time
Airfix reckons it takes five ‘flying hours’ (‘swimming hours?’) to build the kit, though skilled modelmakers will doubtless take much longer, in order to paint the various parts before final assembly.

Weathering importance
One thing - as this is a semi-stealth design, the sides are flush and carry less detail than traditional ships of this kind. It could be a case of adding some extra weathering to bring those surfaces to life. Still, that’s a suitable challenge to fill these long winter nights.

The real thing
Royal Navy Type 45 destroyers have distinctive straight edges and sheer superstructure, free from much of the usual clutter. This is so that the ships have a relatively low radar cross-section, to defeat - or at least reduce - detection by enemy radar. According to official figures, the result is a destroyer that appears to electronic eyes no bigger than a fishing boat.