IS THIS THE FUTURE OF SCALE MODELLING? 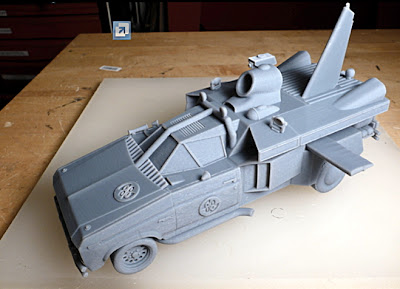 Will the world of scale models follow the same path as desktop publishing? That’s the hot question now being asked, as the latest generation of 3D printers makes possible rapid prototyping of any object that’s stored in digital form.


It may be that once 3D printers become household objects, then ordering the latest Airfix or Revell kit will be as quick and easy as pressing the button to download an eBook from Amazon, or indeed upcoming SMN eBooks now in the works. 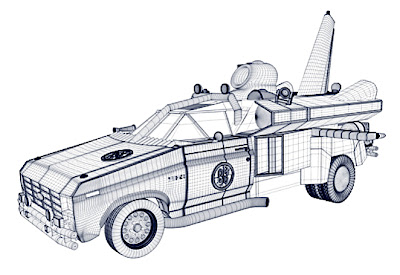 Jet Car from the movies
The pictures here show a scale model car created by artist and computer expert Sean Charlesworth, using an Objet Connex multi-material 3D printer. The subject is the Jet Car from a little-known 1984 sci-fi movie called Buckaroo Banzai across the 8th Dimension.

Not a DeLorean then
As featured in the sci-fi parody, the Jet Car was a modded Ford F-350 pickup truck powered by a jet engine, and capable of supersonic flight. It featured extras such as an ‘oscillation overthruster’ which allowed the car to go through solid matter. Whoa - a useful extra to have, even if an alien organism becomes attached to the vehicle's underside! 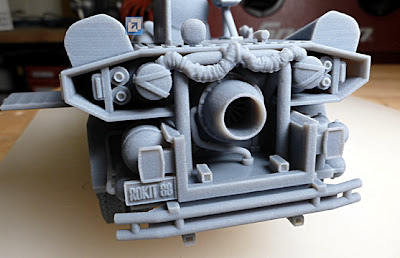 Computer to 3D print
So far as the model goes, Sean Charlesworth says, “I modelled this in Cinema 4D (a computer program) and 3D printed it on an Objet printer. This is my third version which has a lot more detail and is more movie-accurate.

“Some of the stuff had to be exaggerated a little so it could be printed. I plan on finishing the cockpit at some point so it can be opened, and currently the undercarriage is not detailed. A fellow fan had the great suggestion of adding the brain creature underneath. Enjoy.”

How does 3D printing Work?
Also known as Rapid Prototyping, 3D printing is an additive manufacturing technology which begins with a virtual design created in computer software. The 3D printing machine reads the data and lays down successive layers of liquid, powder, or sheet material. In doing this, it builds up a physical model in a series of cross-sections, which gradually build up create the final shape. 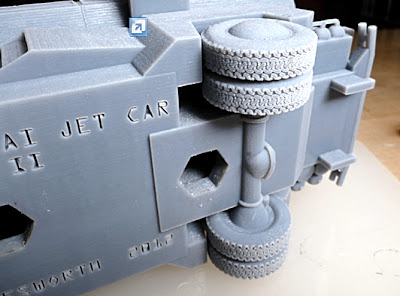 What does a 3D printer look like?
There are plenty on the market, and sizes and shapes vary according to cost and ability. Sean’s Objet Connex is one of a family of 3D printers looking much like the familiar inkjet or laserprinters, used for paper printouts. However, the Connex machines are precision tools for turning ideas and designs into realistic models, parts and prototypes.

Into the future
But there’s a way to go before 3D printing goes mainstream, and the SMN best-guess is that it will remain a specialist tool for at least the next few years. Even so, for garage manufacturers, the technology is already opening up new ways to create model kits of unusual or rare subjects at affordable prices.

Summation
The technology is one to watch, which is more than we can say of Buckaroo Banzai, which is - and we’re a bunch of sci-fi freaks at SMN Towers - a cult movie that's strictly for the uber-keen niche buff.