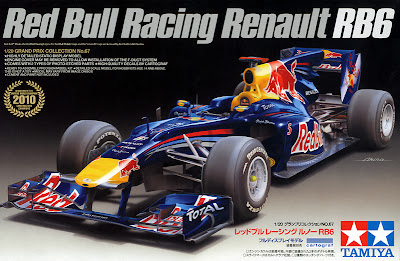 SMN REPORT
Red Bull Racing’s Sebastian Vettel won his third Formula One Driver’s World Championship in 2012, and you can help celebrate that milestone by building a Tamiya 1:20 scale kit of the Renault racer he drove in 2010, to become World Champ for the first time.


The car is the Red Bull Racing Renault RB6, and is an all-new 1:20 scale tooling from Tamiya. The RB6 was also driven by Vettel's team-mate Mark Webber and you can build the kit in either driver’s team markings.

Aero aid
In Tamiya-speak, the car is a ‘highly detailed static display model’ that features a removeable engine cover ‘to allow installation of the F-Duct system.’ For non-fans the F-duct is a cunning piece of technical trixie that channels air through and around the rear of the car, for improved aerodynamics.

Alternative markings
It looks like a fine kit, and has the usual Tamiya attention to detail in the cockpit and the chassis. There are photo-etch metal parts and beautifully printed Red Bull markings by Italian decal-maker Cartograf for both Number 5 and Number 6 Red Bull cars.

And many more cars and bikes from the SMN Store here.